It was a LONG 3 day weekend- but everyone survived! I have honestly been trying really hard to figure out the best way to do a clinic recap- do I do a day by day summary of what was taught?  A quick overview hitting the high parts? Direct quotes from George only? My honest, unfiltered opinion on what went on, the rider and their horses? That probably wouldn’t make me too popular with some, to say the least! Since I didn’t actually ride in it, I don’t feel that an in-depth, super long, 3 post summary is really necessary, so I plan to keep this all to one post, and do a combination of the above- so stay with me here!

The clinic was very well run- everything went super smoothly! Huge thanks to Melissa Osburn who organized it, all the wonderful staff at Dallas Equestrian Center (my old barn!), and Noel Clark of Two Jack Farm and Megan Southam (the 2 assistant demo riders, who’s riding I was MOST impressed with!).

I was fan girling SO HARD to see George on the first day- as I have never seen him in person before, but I grew up reading every single thing he wrote that I could get my hands. I took my first official jumping lesson when I was 14 or 15 ish- I had already been “self teaching” myself to jump for about a year, with help from a dear friend of mine. Basically, I read every jump critique George ever did in Practical Horseman, along with the huntseat bible. Said friend and I would pull jump exercises from magazines, measure and set them in the back pasture, and practice the old fashion way. When I finally had my first real lesson, the jump trainer said, “So you’ve never had a jump lesson before?” Me: “No ma’am”. Trainer: “Huh. Well I guess there is something to those GM articles after all!”

Back to the clinic- it was extremely educational. George really hammers in the American forward riding system in everything he does, and does many demonstrations of how it helps the horse and rider. Everything he said was exactly what you would expect George to say, he has this clinic thing down pat. I will admit that some of the flat work in the 3 ft group (which Megan and Clark were in) definitely was a bit dull. I was expecting a bit more advanced flat work. The ‘hardest’ thing he had them do was shoulder-fore. The 3’3 and 3’6 groups got a bit more interesting though- with collected canter work, shoulder-in and haunches-in, turns on the forehand etc, so it did get progressively harder with the higher level groups, but I expected more I guess. 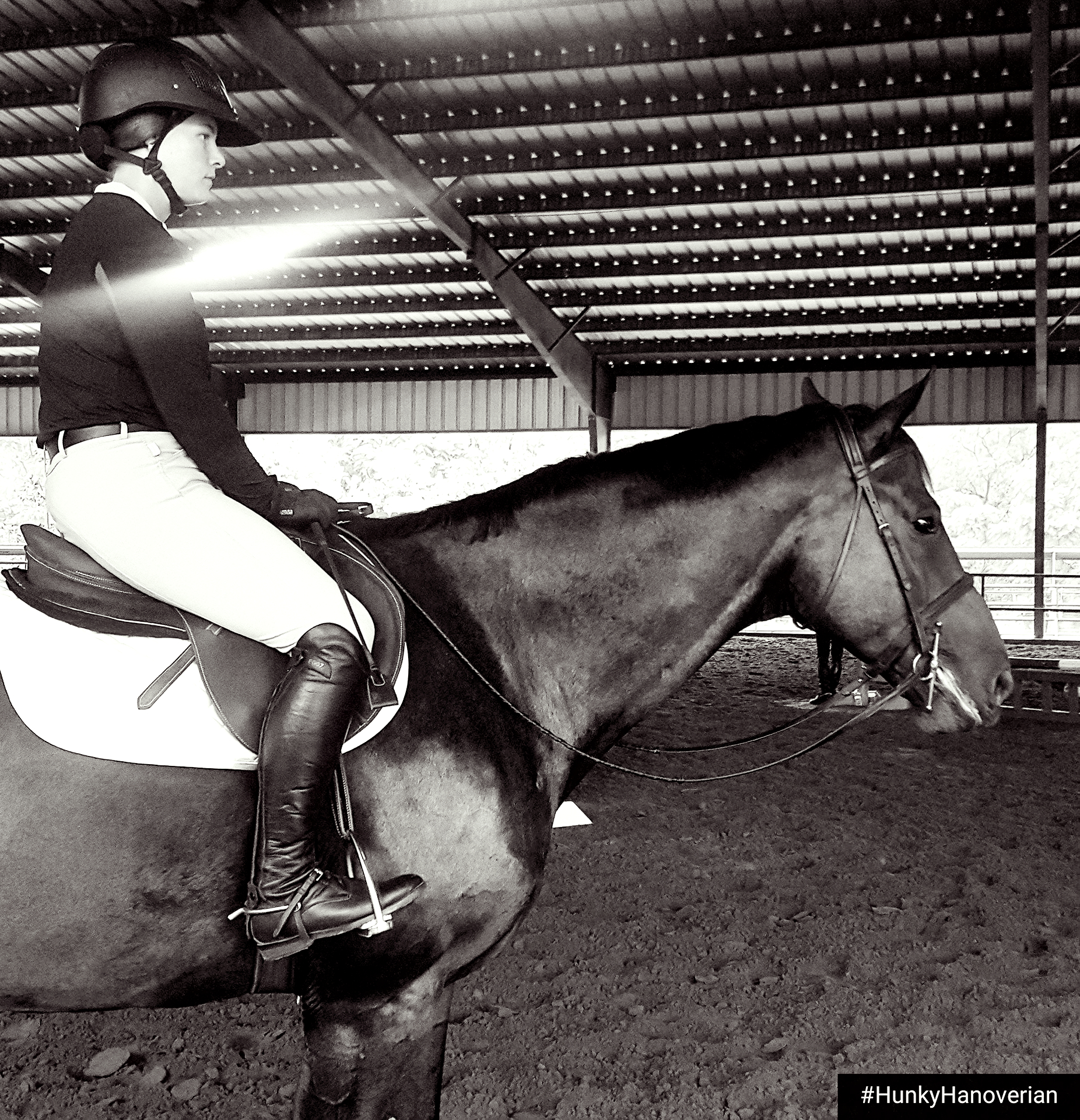 He hit on a lot of the things that many people who are familiar with George would have heard- always have spurs and long crop (no short bats for him!) and be sure to keep your horse tuned to the legs with these aids. As George reminded us, our legs are NOT strong in comparison to the horse, so be ready to back up your leg aid with cluck, spur, and crop behind the leg as necessary. Take spooky horses into spooky places. Ride them into spooky corners for example, and do not let them say no, as this spoils them. He checked all the bits. He is a big fan of twisted wires. Does not like the fashion of using pelhams on all the Eq horses, as many do not like them/need them. Likes the classic look of full cheeks. Gave some people grief about not shiny enough boots, but really didn’t comment on any horse turnout or riders apparel much. Hammered home the safe way to adjust stirrup length (foot in the stirrup, adjust INFRONT of the thigh, not behind). He likes the girth to be cinched up higher on the off side.

Talked about some history and different riding systems in different countries, which I always enjoy but won’t get into here. Also talked a good bit about dressage being extremely helpful, and how you should leave your trainer if they don’t teach some dressage. But then he said to be careful not to do too much modern dressage, as it can cause you to be stiff and drive with your seat.

Said some funny stuff about how spoiled horses that are accustomed to lots of pats, praise, treats etc used to be called “lady broke” back in the day, and how women riders need to treat their horses more like how they treat their husbands, and their husbands like their horses. I found this to be HILARIOUS, as I am definitely ‘stricter’ with my husband then Rio, and I bet my husband would enjoy all the attention I pile on Rio LOL. Definitely needed that kick in the pants to get Rio a bit more disciplined as not coddle him so much.

There was lots of emphasis on keeping the horses neck straight and bending their bodies with your leg. Repeatedly discucssed riding them up to the contact with impulsion. At one point he said, “Impulsion is LIFE”.  He had the 3’3 group cue for a walk/canter depart across the diagonal without using the inside rein. It was actually kind of surprising how many struggled with it, which led to him harping on cueing horses for the canter with leg only, not hand (inside leg at the girth, outside leg back), which of course translated to straighter canter departs.

“You children are so spoiled. So indulged. So Spoiled. I do not tolerate spoiled people. Or dogs. That is why I have this whip.”

“Discipline has gone extinct in society. Riding instructors need to teach discipline. Don’t wait for schools to teach it, because they don’t.”

“As you jump your horse you are constantly making transitions- turning, lengthening, collecting”.

“There is nothing that gives me a happier night then tears. I love tears.”

“Pretty is as pretty does. I am very suspicious of pretty boots, pretty sweaters, pretty belts. Verryyyy suspicious. You are pretty. That is not a compliment.”

“If you lose your temper, you do not ride my horse.”

“Great feel and eye, you are very talented, but you need to get fit.”

“We have to harden you up. Some of you are petunia princesses.”

Untitled from Kelly on Vimeo.

MM and Clark had an EXCELLENT clinic. MM received many compliments from George, such as her leg position, and overall position in the no stirrups work. He rarely said any corrections towards them, other then giving her  a hard time for being a bit passive to the liverpool once, and not quite galloping fast enough to a triple bar. He also wanted Clark a bit higher in the poll the first day, but only mentioned it once before MM got him up more. They never missed the directed striding in any of the exercises, and rarely had a bad fence. One of the harder exercises George praised them for being the ‘best of the group’ which is always nice to hear. George rode Clark on day 2 at the start of the lesson. He wanted to demonstrate half turns in reverse and turn on the forehand I believe. Unfortunately, Clark had a few others ideas! Due to some of Clark’s training in the past, he is not a big fan of multiple uses of the crop behind the leg, and he got a bit tense and ‘up and down’ with George. Of course it wasn’t anything he couldn’t handle, and he worked him through it, even threw in some counter-canter work with him.

Well folks- that’s all I have for you!! It was an AMAZING weekend, and I absolutely loved getting to learn from the Master himself. Truly an experience every dedicated equestrian should seek out!