I know some of you are curious to know what saddle I decided on (I demoed Voltaire, CWD, and Butet over the past week), but I’m not quiteeee ready to announce the winner yet- because I haven’t 100% committed to any yet! Expect the big reveal by the end of the week though. Other then trying saddles, Rio and I had a bit of a jumping boot camp these past 4 days (Friday-Monday) to prep for the show. Trainer MM left with some of the horses this morning for the first week of the Waco show, so Rio and I will be only flatting until the show starts for us next week. We definitely made the most of our last schooling weekend though, and had some really great lessons. I actually have a ton to write about- sorry I was MIA for awhile there!

First off- MM, Amazing Vet, and I have been racking our brains trying to figure out the best long term solution to protecting Rio’s left hind. Although it is basically healed, Rio still interferes and can sometimes open up the skin a bit. We tried covering it with a bell boot- but that just rubs it. I cut a polo wrap in half (so it wasn’t so long) and was wrapping the area with that, but it isn’t great protection and comes  undone sometimes. Pastern wraps were an idea, but the area is a bit too low and the wraps not wide enough to cover it.

Then, MM suggested full coverage equifit boots. I had never heard of these, and immediately googled them. WHO KNEW THESE EXISTED! They are exactly what Rio needs- Equitfit hind boots with an extended liner that is reinforced in the right area to protect from accidental trauma. According to the website, they are specifically designed for horses that interfere behind. They are priceyyyy but luckily my birthday and Christmas fall a week apart and I have a super awesome and generous older sister who got them for me.

They may look a touch unusual, but they certainly appear to be very protective. I assume Rio will live in these the rest of his life, hopefully they last forever!

On Friday we did a super fun bounce exercise and Rio was a superstar. Mildly confused at first, he caught on super quick and we went through several times both directions with no issues. I got to focus on my body position and allowing Rio to learn to do his job without holding his hand. 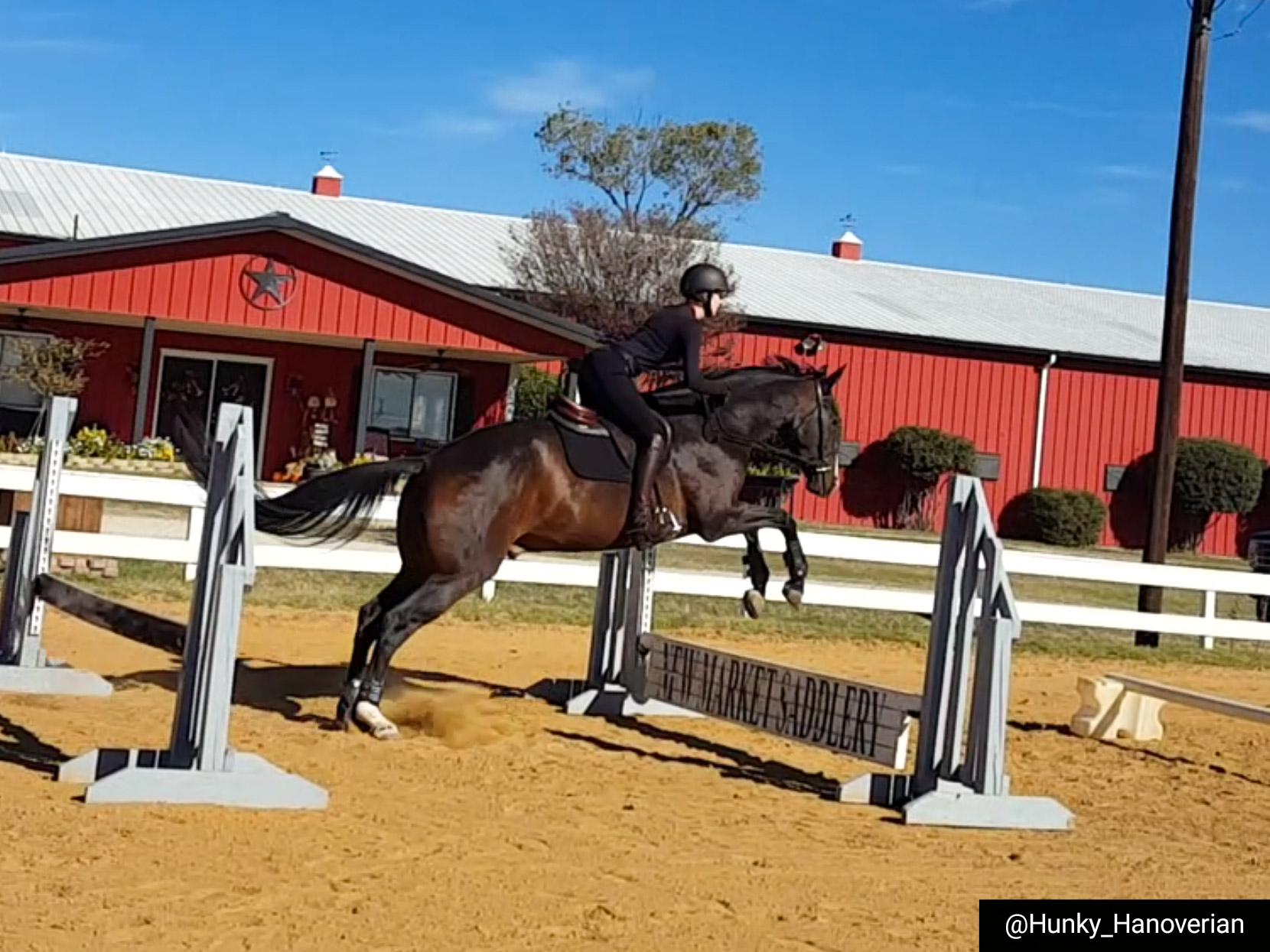 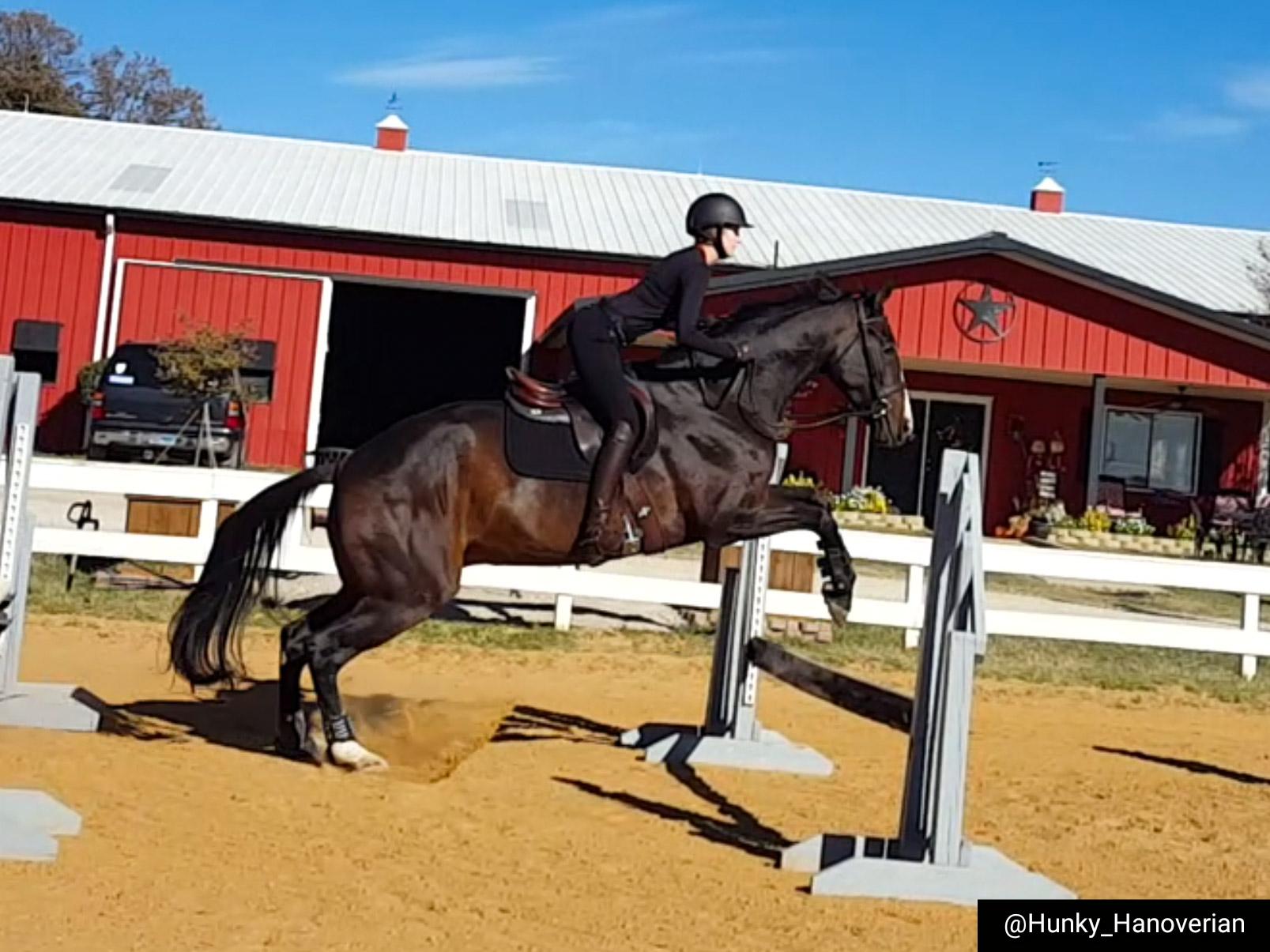 Video from the bounce exercise:

On the second day of jump boot camp we rode in the big jump ring and focused on course work. After an uneventful warm-up we did out first course, which felt SO GOOD. It flowed easily, and all the spots just seemed to appear for us. After that, I found every way to miss every spot possible. It was hard  not to get frustrated, but MM talked me off the ledge. When I reviewed the video footage later I realized most of it wasn’t THAT BAD, and that my “perfectionism” needs to take a chill pill. This is the first time that Rio and I have done course work at this height, and the first time we have really focused on courses in many months. He doesn’t have years of experience like other horses I’ve shown in the hunters, and I am far from a flawless rider. I could not be more proud of him, and his willing attitude, even when I got him to a horrendous spot. Thankfully, he doesn’t hold a grudge, and is always willing to try again. 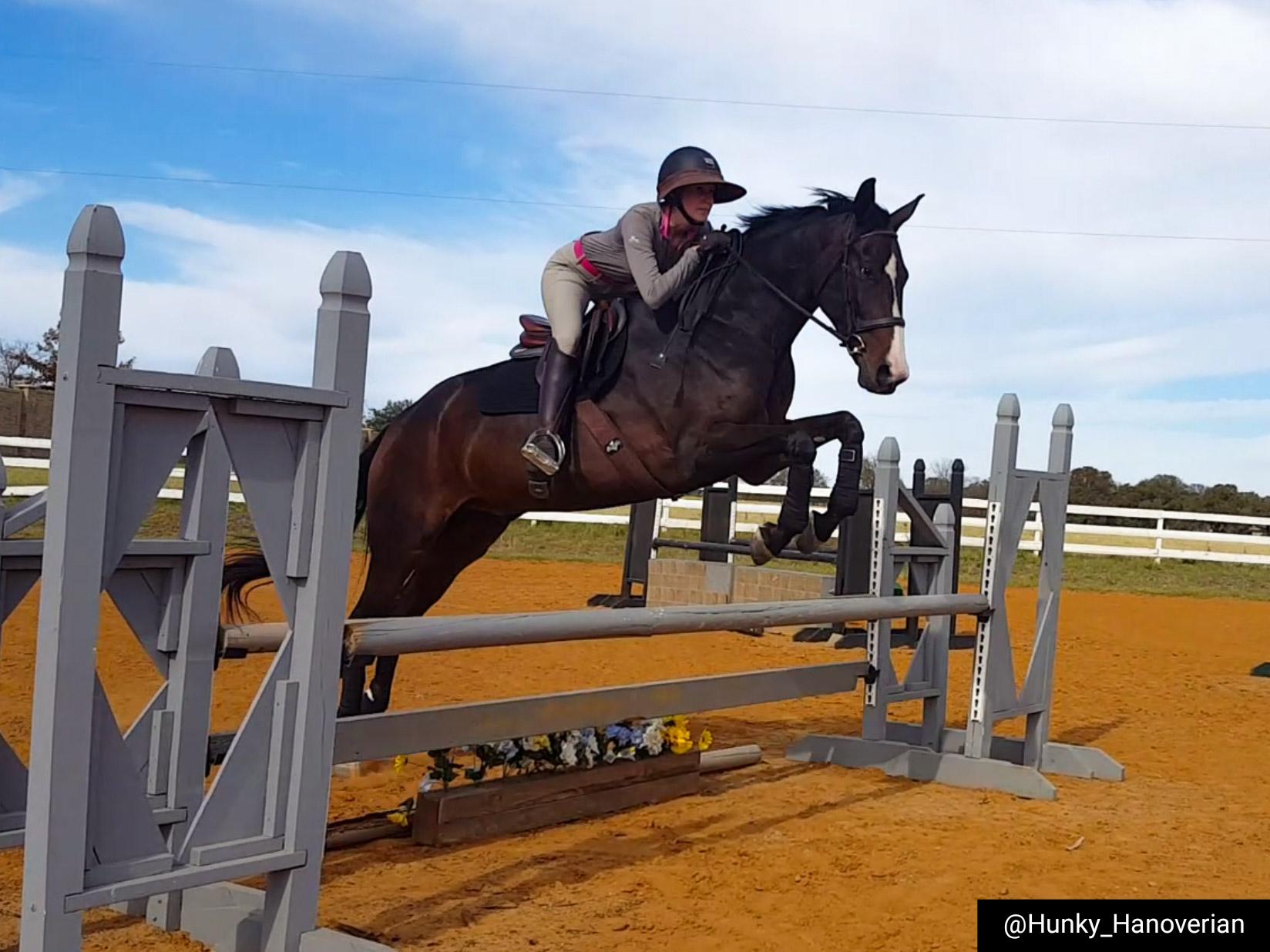 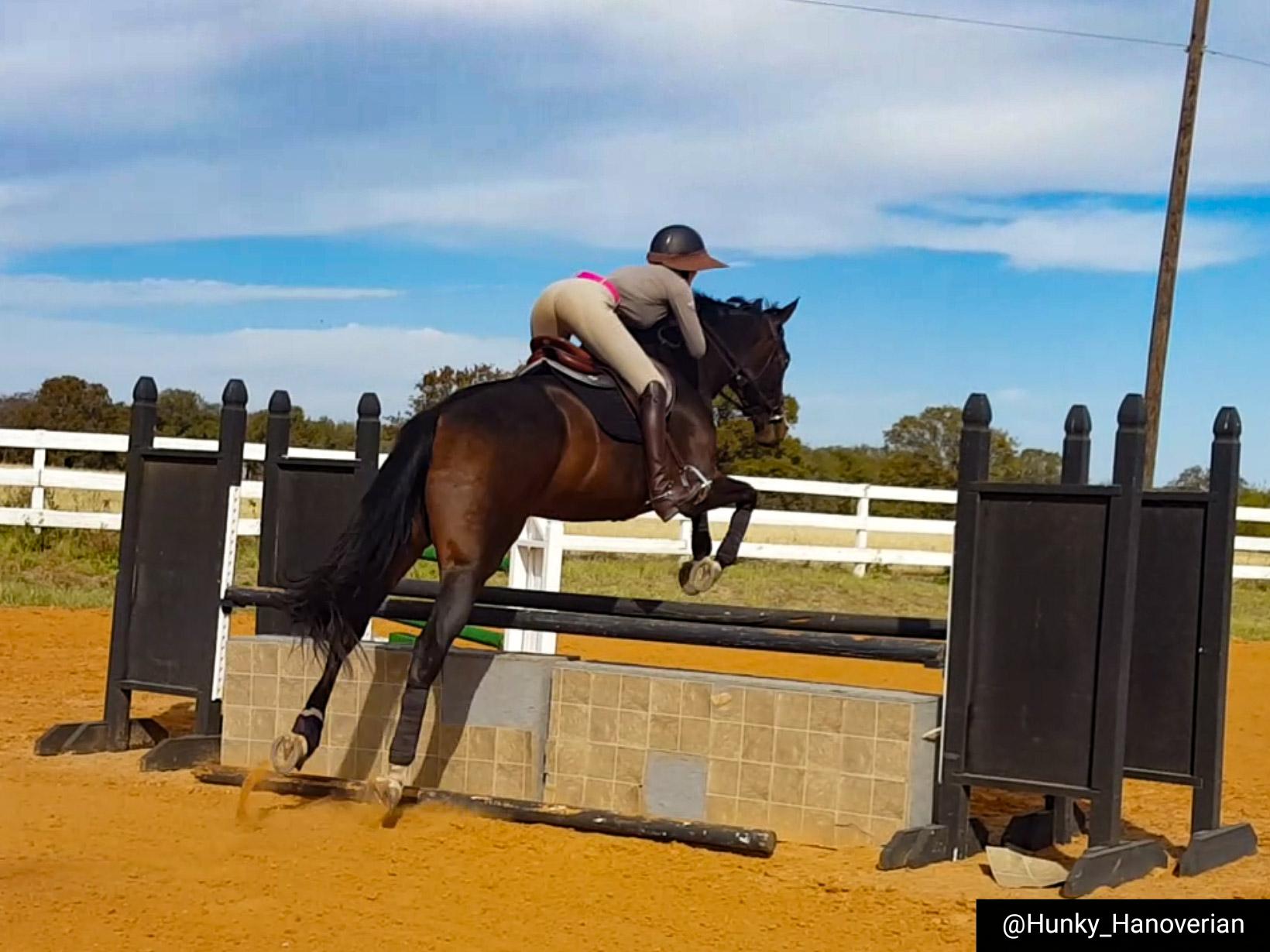 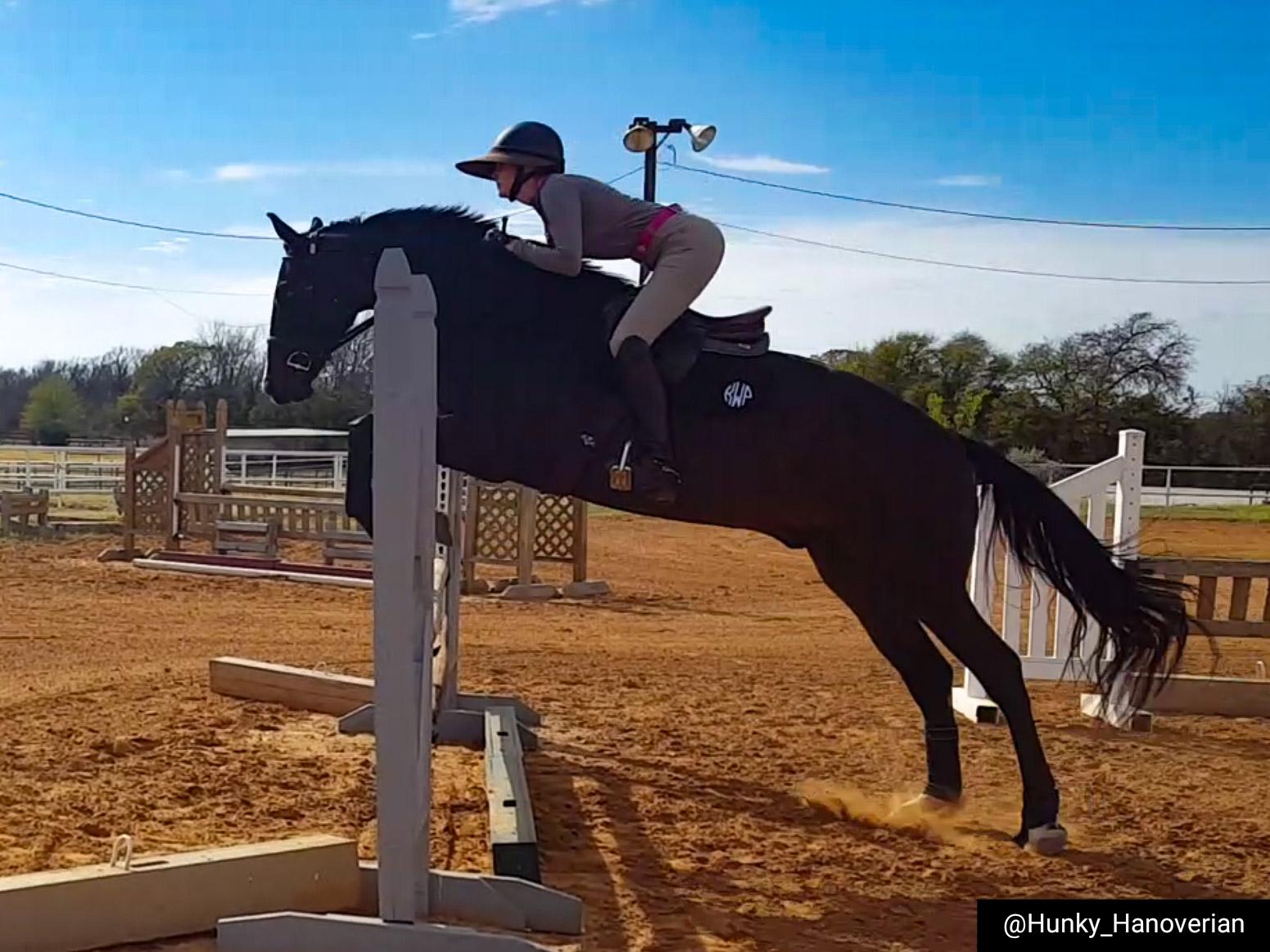 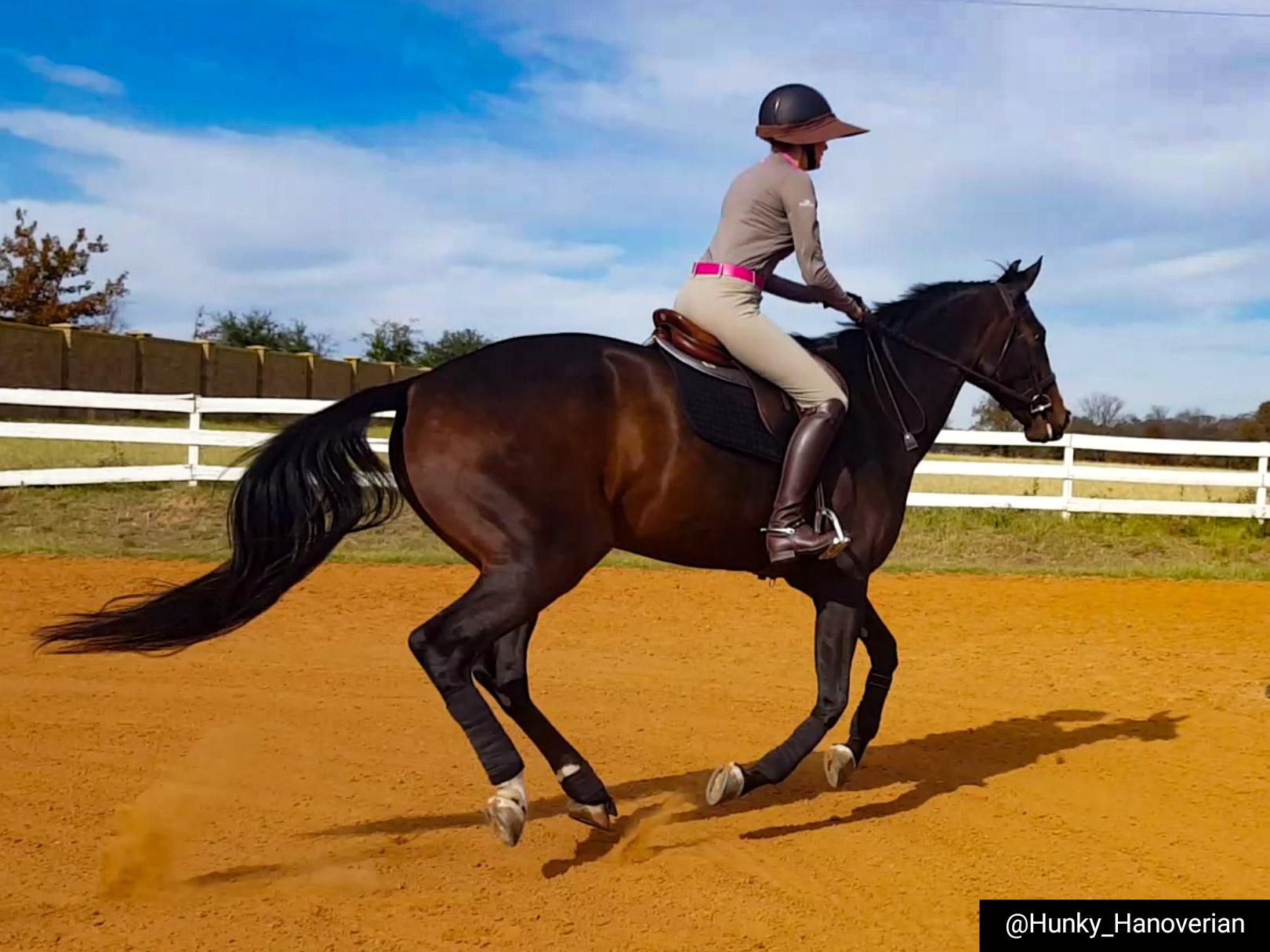 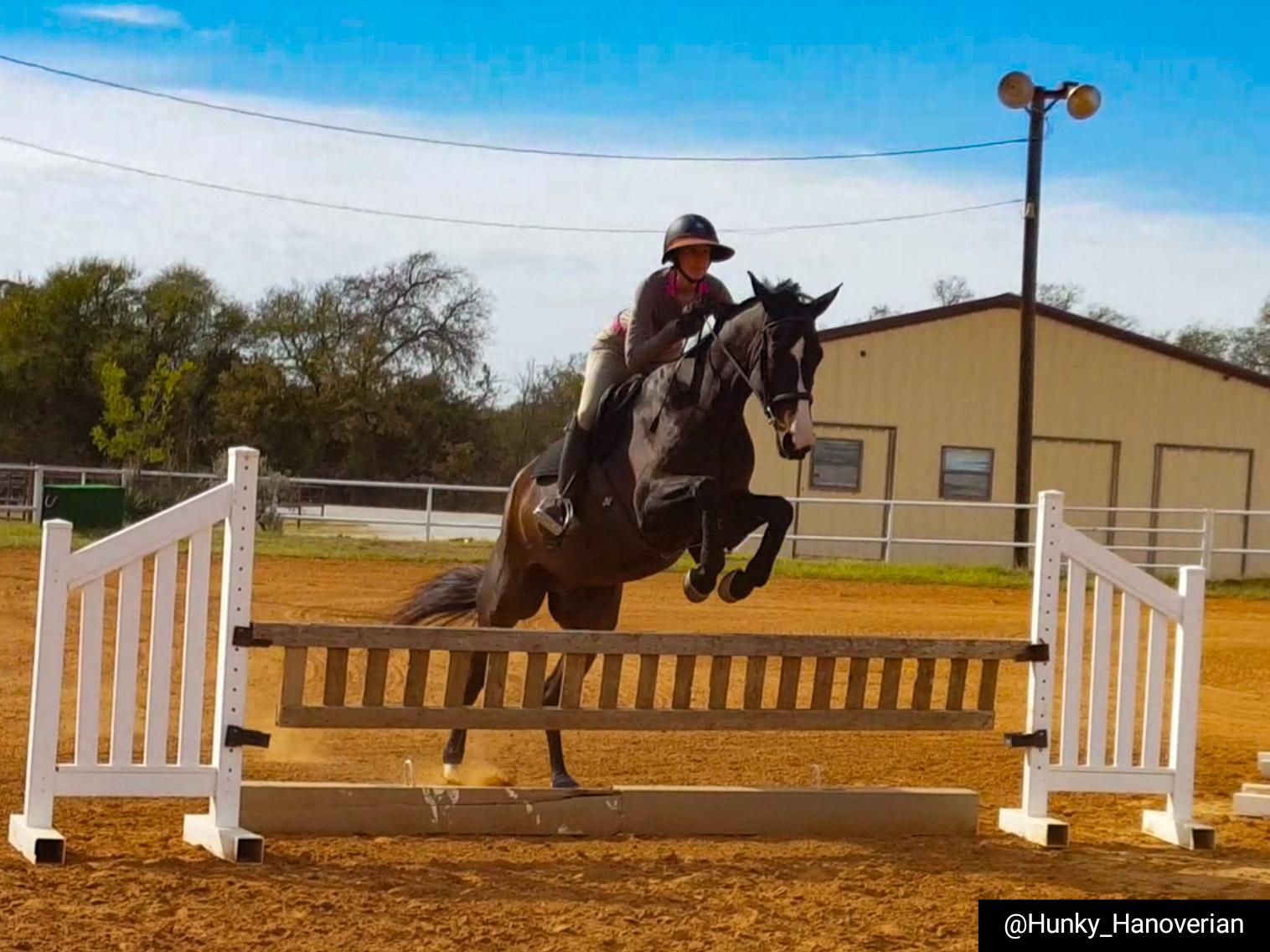 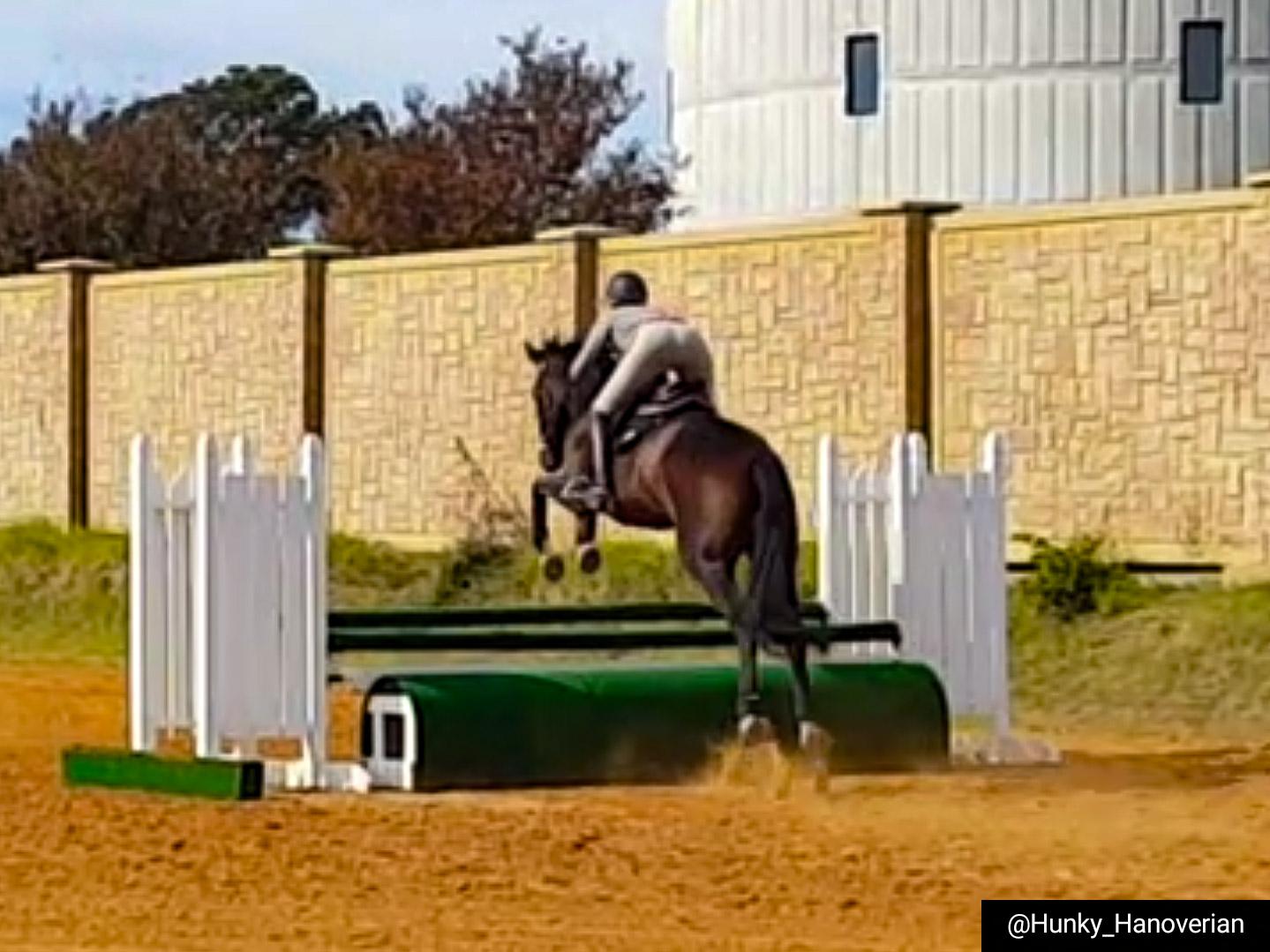 On Sunday we rode in the big ring again, but kept things simple and short. I asked MM to warm him up, so I could watch him go for a bit. I always feel like “seeing” really helps cement things for me, and I was struggling a bit with long approaches to oxers on Saturday. I used to love single oxers, but my eye is currently on the struggle bus, and I think Rio is picking up on my tenseness and insecurity during the approach. I wanted MM to give him a few solid jumps before I got back on. I also demoed Butet during this lesson- so you may notice the change in saddle in the photos. Once MM was done doing her thing, I got on and jumped around a bit. I was very happy with how it went, so we called it good after only a handful of jumps and I only flatted in the other model saddle. This is a lot of jumping for Rio, and I didn’t want to overwork him or push him too hard. 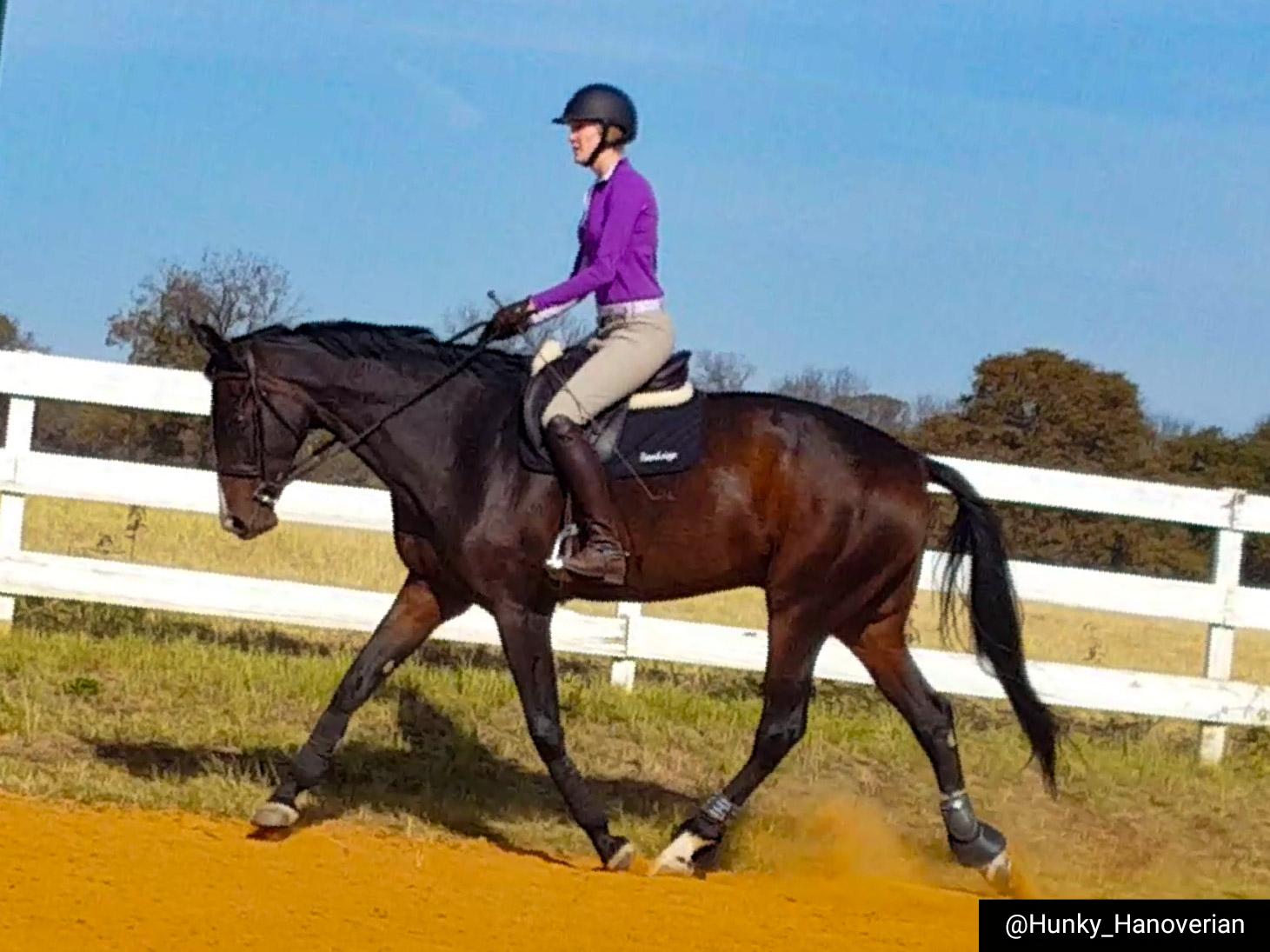 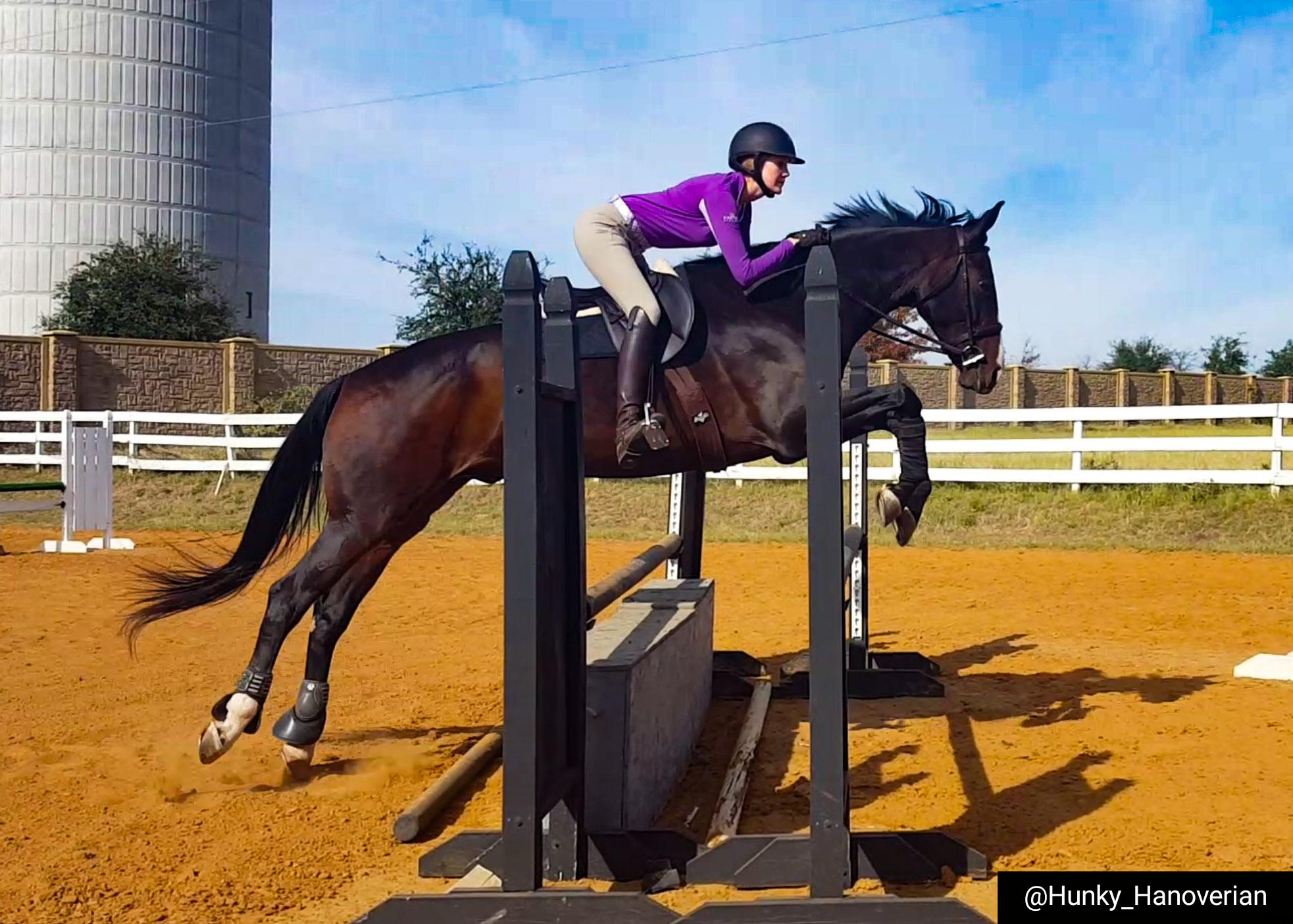 No media from Monday! We jumped small jumps around the smaller jump ring and I tried not to die over the oxers. Seriously, WHY CAN’T I JUMP AN OXER. We got the perfect canter to the verticals with no issue, but every time I came out of the turn to an approach to an oxer I just COULD NOT. Nope, nada. It’s actually kind of funny how ridic it is at this point. Fingers crossed that a week of flatting and the issue just resolves itself at the show (HAHAHAH). I will probably have nightmares about finding all the wrong spots to every oxer every night of the show. Such is life though! At this point it really must be psychological, because everything else is going great! And it’s really not THAT bad, it’s just no the perfect, quiet flowing distance that hunters strive for.