Now that Rio and I are back in the swing of things, we can now focus on strengthening our weak areas. You guys have already heard ad nauseam about my quest to encourage Rio to raise his head and neck and use his butt more during our flatwork… well I bet you can see where this is going from the title of this post. In an effort to continue this theme, my jump lesson yesterday consisted of some pretty tough bounce work, followed by a 2 stride with a sizeable oxer on the out.

Rio would really like for all of you to know that bounces are HARD. Never in his life has he had to do bounce work with so much height as well. The “out” of the bounce was maybe 2’9-2’11 and Rio thought he was going to die. Only kinda joking. I’ve done bounce work in the past, but mostly really small stuff that Rio didn’t really have to try over. It was definitely a bit sloppy the first few times through until he realized “SHIT THIS BE HARD. I MIGHT NEED TO LISTENZ TO MOM”. You’ll see in the video that not every approach was perfect either, but the work was super beneficial regardless of my ammy mistakes! 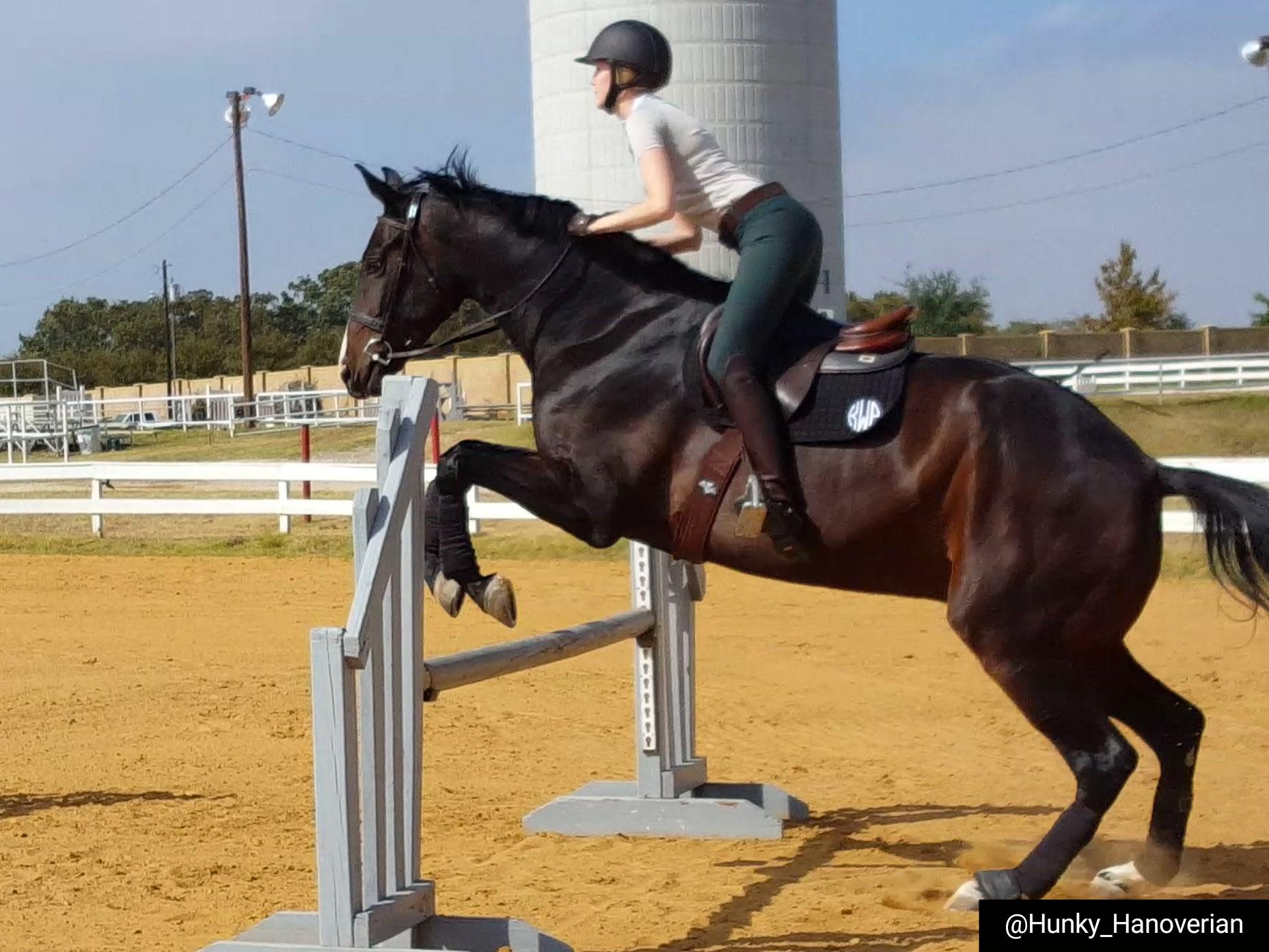 But then something awesome happened. After doing the bounce a few times, MM had me continue to the outside 2 stride line, and Rio jumped the small vertical on the “in” better then I’ve even felt him jump small verticals, which he usually doesn’t respect at all and definitely doesn’t rock back for. I have decided to name this phenomenon, “The bounce miracle”.

Ideally, we wanted him to jump into the 2 stride, sit back up, and have room for a pretty slow spot out over the oxer. Again, this would require mucho sitting. Even though MM put the oxer up to 3′ ish, Rio still sailed down the line and cruised over it. Not bad at all (he is such a good boy) but we didn’t quite achieve that ‘sit back’ inside the line before the oxer. Goals for future rides though, as Rio tried his heart out and was getting really tired towards the end. No complaints here!

We are definitely figuring out this new canter still, but I am thrilled with how it has helped our jumping so far. Occasionally Rio isn’t so thrilled about the increased difficulty in the canter,  and he drops behind my leg and breaks to a trot. I get it Rio, this shit is hard. I sympathize. In fact, I sympathized so much that I kinda just let him do that for a few rides, and then Megan had to really insist he stay cantering during their last schooling ride. I now have strict instructions to, as GHM would say, “Lay a stick on him!” when he does that. Keep your eyes peeled for that moment in the video, Rio didn’t entirely agree with Mean Mommy tactics LOL.