I want to do Rio’s first real show justice so I’ll be splitting this into 2 posts. They will also be super media heavy, so prepare yourself!

After work on Friday I met Trainer at the show facility, Valhalla Stables, around 4:30. She had already schooled both her horses so I tacked up for my schooling ride. My classes were scheduled to be in the covered ring so we headed that way.

As is typical the schooling day of a show, it was BUSY. Rio was a lot more “up” then usual and I started out a bit timid due to the busy ring. Busy warm-ups do not usually bother me, but I have been out of the show swing show awhile now and Rio was hotter then usual to start off. After about 15 minutes of walk/trot I couldn’t really find space to canter due to the large number of people jumping or only walk/trotting on the rail, so Trainer decided to have us go ahead and start going over some fences to find our rhythm. All of the jumps were set very small (2-2’3) so it was fine that we didn’t have a huge warm-up.

Whoa Kelly. If I keep going in this much detail this post is going to be long and boring AF. Let me stop myself here, and just say that we found our rhythm and Rio jumped around fabulously. He also really surprised me by offering up all the leads changes, which gave me a lot of confidence for our rounds the next day.

Rio seems to really like horse shows. He settles right in and eats and drinks with no issues. He is VERY attention hungry though, so if you are at the stalls and not giving him attention, he find ways to let you know that he’s the center of the universe.

Exhibit A of Rio not feeling like he’s getting enough attention. Notice that he looks directly at the camera at the end.

RioandLeffers from Kelly on Vimeo.

I knew Saturday was going to be one long show day. The schedule had all the jumpers going in my ring first, then a course change and open schooling, followed by  the pre-green division and then finally my 2’6 Jr/Am division with approx 20 entries. Based off of number of entries in the jumper rounds I estimated that my division might start at 1:30. LOL (Hint, I was wrong.)

An old friend of mine brought her TB to show in the schooling jumpers (3-3’3). I was super excited to get to see her ride, because we have a long horsey history of being in Pony Club together, then riding on the equestrian team in college together. S also came to support us and watch our rounds. A and her gelding Bombay did super, and it was really fun to get to all hang out doing our favorite thing! 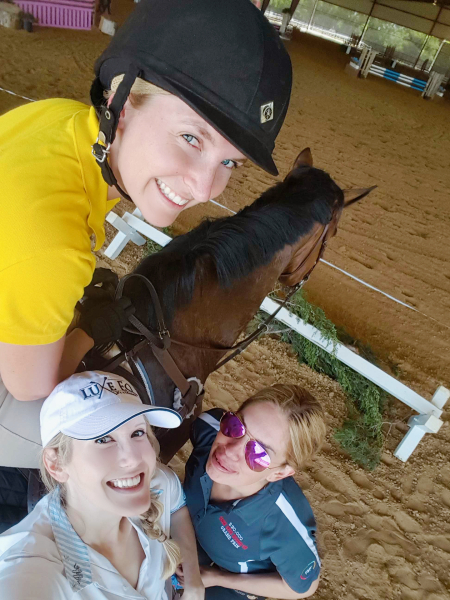 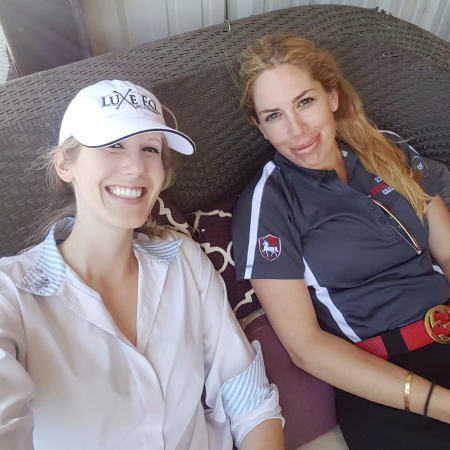 After the schooling jumper division was the highs (3’6), the last jumper division of the day. Trainer brought her fancy show jumper Cascai to get a few more show miles and he was competing in the highs. Although it’s smaller then he usually shows, he doesn’t have a ton of shows under his belt so Trainer thought it’d be a good learning experience for him. He jumped the absolute SNOT out of every jump and had the whole show talking about him (no surprises there!)

Finally the jumpers were over at about 1:30. There was a course change, open schooling, and drag, so the 2’6 divisions started about an hour later. Trainer showed her newest import, Leffers, in the pre-greens and totally rocked both her rounds, getting 5th in the warm-up (out of 30+ rounds) and 1st in her hunter round. I’ll post lots of pics of him with tomorrows post, so get excited.

Finally around 3:30 it was time for to get one. I was really pleased with our warm-up round, but we REALLY struggled with the lines, which were purposefully set short (schooling show and all). We EASILY could have done a 6 stride in 5, and at the last minute I panicked like a total ammy and my brain went “YOU MUST DO 6” and I slammed a 6th stride in, aka ugly ass chip. In hindsight, I should have just rocked the 5 haha. Then on the last outside line Rio decided the first jump looked a little scary and we did a little stutter step before it.  Below is the video:

RioValhalla1 from Kelly on Vimeo.

Next was our 1st hunter round. Overall it was a lot smoother, but still a bit of struggle in the short set lines. I was super psyched about it.

RioValhallaHunter1 from Kelly on Vimeo.

Our last round of the day was the Eq O/F. We were a bit sluggish to the first jump, and Rio was a tiny bit unsure of jump 2 (purple flowers) and we kind of crawled up to it. Our next one was fine, and the we rolled back to an oxer and crawled up to it a bit. Finally I kicked it up a notch and I felt like we finished strong. Nothing major, just some sticky spots. Still super proud of it.

RioValhallaEqOF from Kelly on Vimeo.

This is Rio’s first time EVER doing full hunter rounds like this, and I am SO FREAKING PROUD!!! He nailed EVERY lead change like an absolute pro, and marched around like a seasoned show horse. I couldn’t be happier! I actually remembered to ride some of the course, make the occasional adjustment, and not completely get in his way. I was all smiles after day one, and pretty much felt like I had won the lottery. My division was large, but I managed to snag a 6th in my hunter round.

LOTS more to come for Show Day 2 so stay tuned!!!