Rio felt off at my lesson last Sunday, so after throwing  him on the lunge real quick and realizing he wasn’t quite right I brought him home, gave him 3 days of banamine, and the rest of the week off. I sent his amazing vet, Dr. Mitchell, videos from the Sunday lunge, and she came to see him on Saturday. She gave him a thorough looking over, then we discussed where we were at and where we wanted to be. (P.S. Dr. Mitchell was featured on the Questions for the Vet episode for Amateur Hour podcast last year. Give it a listen here or search Amateur Hour for “vet” wherever you listen to podcasts.)

Good news- he was considerably sounder then he was on the previous Sunday. It’s been raining a ton here so it’s possible he slipped and tweaked something and is thankfully already feeling much better. But, he’s not 100% in performance shape yet. Some of the issues he has  currently are due to lack of muscling, so that will come with more time back under saddle. The hard part about horses is one thing can be the primary issue, and then treating that one thing can cause secondary issues to spring up. In this case, Rio has had a ton of time off in order to rest his suspensory, but now he needs to build up his hind end muscles again in order to support his stifles and SI area adequately.

The other compounding issue, and probably the biggest one, is his weight. He is such a BIG horse, it’s a ton of weight to carry. Dr. M talked me through it, and we are going to tackle his weight head on. She really feels that getting a lot of weight off him will help with all the other small things, and hopefully even make them go away completely. I also need to continue to get him fit, but in a way that is going to be nice to suspensory as we build-up the other muscles. We’ve been given a strict protocol of walk/trot only on hard ground through the rest of the summer. Between the strength training, and the new diet (also prescribed by the amazing Dr. M), Rio should be a new horse by September! To keep myself accountable, I’ll be posting monthly pics and weight tape updates. Here is where he is starting! 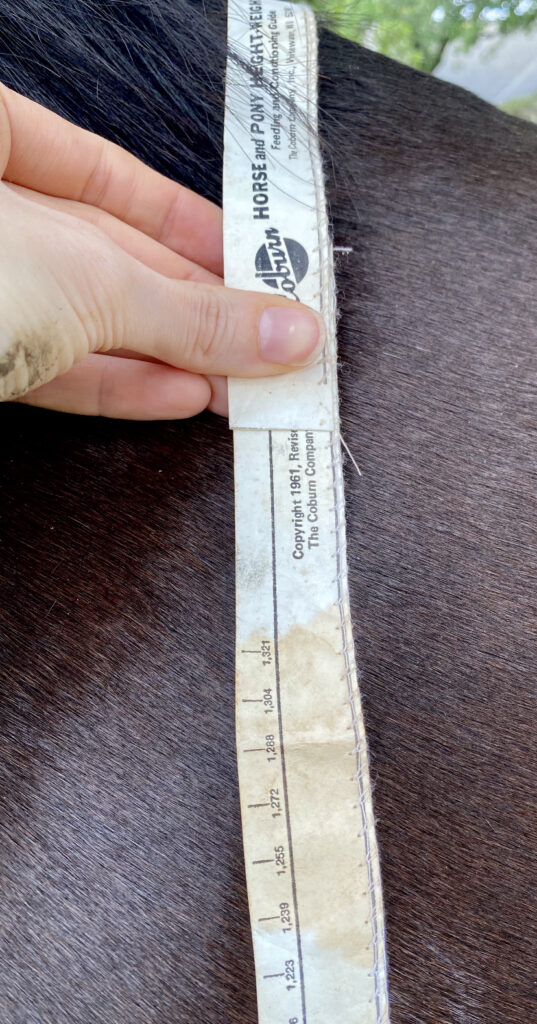 He’s too big for the weight tape, but I estimate he’s currently at 1425 ish. He has definitely lost some weight since this past fall, but still has a lot to go. I’m going to try and measure at the exact same place (referencing the prior pics) every month to try to get a good idea of how his diet is going.

Needing to be cognizant of not stressing his suspensory- we will be taking a break from battling the bridge crossing. Unfortunately, the rearing and spinning in order to avoid the bridge is possibly what made him ouchy in the first place. It’s just too much unnecessary stress, when I should be slowly building him up and avoiding stress like that. If I’m not trail riding with other horses (where he goes over easily), I’ll be hopping off and leading him over for the foreseeable future.

In further good news, Rio and I hit the trails Sunday with my friend Liana on Pal. Rio felt MUCH better, almost 100% back to his normal self. The weather was perfect, and the rain has made everything SO GREEN. We also spotted a bobcat, chilling like it was a domestic cat. It wasn’t even scared of us, although it did casually trot away as we rode up to it. 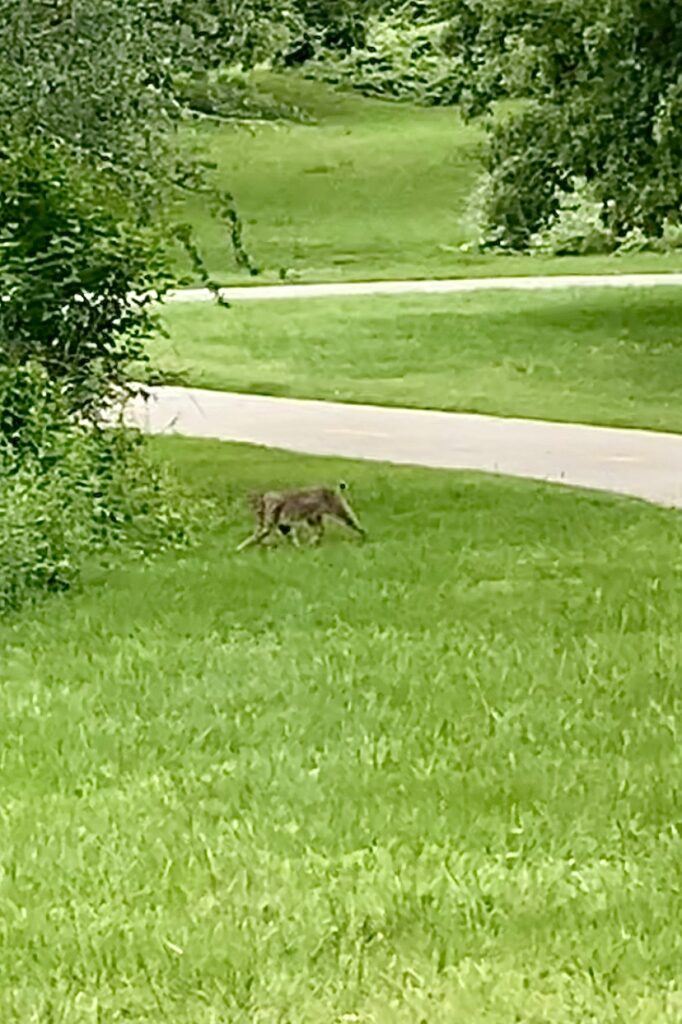 Oh and also, I think Rio is already protesting his diet. My mom sent me these videos last night. Someone call the ASPCA, because my hiraffe thinks he’s STARVING.