A long-time friend of mine just got home from competing at the 2018 AEC’s at the Colorado Horse Park. In fact, “A” is the one who invited me cross country schooling a few weeks ago. She was doing it to prep for the AEC’s and nice enough to invite me along for the fun. I was thrilled to hear that she was going to compete. A got Bombay 4 years ago when he was 4 years old and green broke, and has done all the training on him herself. Nothing like bringing a horse along yourself and then making it to championships! Huge congratulations girl, I am so happy for you!! Thank you for sharing your AEC story with us today!

The 2018 American Eventing Championship was everything I thought it would be: a tiring, humbling, money-sucking piece of Heaven. Take your typical horse trial and then triple everything that goes into it. That’s the AECs. When I learned that my horse Bombay Sapphire (I call him B) and I had qualified, and that the event was going to be held at the Colorado Horse Park (a mere 13 hours away), I thought, “Hmm, maybe I should enter.” I went back and forth for weeks thinking, “No, it’s too far and too expensive,” and, “Yes, do it! One shot!” It’s true, I hadn’t qualified for Championships in some 10-12 years and I wasn’t sure when I’d qualify again. Regardless, there was no way I was hauling 13 hours to Colorado alone, so I left it up to fate and posted a long shot Facebook ISO for a trailer and hotel buddy. Lo and behold, an amazing stranger (now friend!) from my area actually responded and offered to take us along with her horse, so that was that…I got online, winced at the entry fee, and entered the freakin American Eventing Championships.

We spent the next month cramming: taking as many dressage lessons as we could afford and headed out cross country schooling a few times. This would be our first event coming off the spring season, so no chance for practice shows! But Bombay felt ready, and off we went to Colorado. It was a long, two day trip, but we made it safely and settled right in.

B really liked his trailer box stall!The Colorado Horse Park is huge and glorious. They have some 50 million arenas and barns. Ok, not that many, but seriously, it’s a big time venue. I thought we might be out of our league at this level of competition. Sure, we qualified just like everyone else there, but I wasn’t sure if that was by skill or luck…Probably luck. Not gonna lie, I was a bit intimidated seeing all these incredible horses parade around the show grounds. Bombay is cool too though! My good friend Amanda flew in from Houston to groom and support (cheers to Amanda!) and a few other folks in our barn aisle were also from Area V, so we had a fun time stabling. Bombay probably wasn’t too enthused about stabling. He’s used to being turned out 24/7, so having to be stalled for a week, plus the trailering, was hard on him, but he was such a good sport about it.

On Wednesday the cross country course opened for inspection, so we enthusiastically headed across the street to see what we were in for. Yes, you had to cross an actual road, but on competition days they had a policeman directing traffic so all the horses could cross quickly and safely. My first impression of the novice course was that it actually seemed easy for a championship, but I didn’t want to jinx myself by saying that out loud! The only fence I was a little worried about was 7AB: an open ditch, 3 strides out to a rolltop with brush on top. If Bombay peeks at anything, it’s an open ditch, so I knew I would have to ride strongly and be there for some encouragement if he needed it (read on to see if he jumped it…) There were also 3 water complexes on course…so good thing my horse doesn’t have a water problem! I thought training through advanced had difficult courses (and they did…with many competitors getting the big E), so I was kind of bummed that the novice course didn’t have as many challenging questions. But, better to be too easy then too hard, right?

After a few days of settling in and adjusting to the altitude (I was feeling a bit ill Wednesday and Thursday), our dressage day finally arrived. We weren’t scheduled to ride until late afternoon, so I took Bombay out for a trail ride in the morning and he felt great. But then the weather hit… With lightning strikes within the 10 mile radius, they suspended showing and sent everyone to the barns (including rounding up all the poor xc jump judges scattered across the course.)

We waited around for an hour-ish until they announced that they would resume showing, yay! So we got tacked up, and headed for the mounting block. As soon as I was about to pull down my stirrups, the announcer stated that another storm was coming and all showing would be suspended for the rest of the day. They’d have a meeting later that evening and figure out what to do. With a lot of divisions left to run and an already jam packed schedule, I was afraid they wouldn’t be able to reschedule everyone. Luckily, the Colorado Horse Park has an amazing team and a ton of equipment, so in the end they managed to set a couple extra arenas, scrounge up some more volunteers, and squeeze everything into the weekend. No Friday dressage for me, but I’d ride dressage and cross country both on Saturday. Phew!

SATURDAY: WE “GET” TO RIDE DRESSAGE!

I was rescheduled to ride dressage early Saturday morning, and it was CHILLY (Yes, I’m from Texas and think 50 degrees is cold). Knowing B would be fresh, I got on a whole hour early, but unfortunately it didn’t make much difference. Our warmup felt tense and I just couldn’t get the floaty, relaxed gaits that we had been working so hard on. As my ride time approached, I figured I’d just have to finesse what I could and at least ride an accurate test. So we entered at A and did the best we could, pulling off an accurate but very “safe” (damage controlled) test. Score came back…35.7. I was pretty disappointed. It was the worst score I’ve ever gotten on him. In hindsight, I realize the judges are less generous with their scoring at championships, so really it wasn’t our worst test ever. In fact, Amanda said it was the best she’s seen him go (she’s quite kind) but I thought we could do better. I kept thinking “if we had just gotten to do dressage when we were supposed to…” But, that way of thinking doesn’t get you anywhere, so I put it in the past and set my focus on cross country.

Finally, cross country…over a course I wasn’t too worried about (except one jump). Since Bombay had just done dressage a couple hours earlier, I kept my warm-up short, jumped a few fences, and headed to the start box. “THREE-TWO-ONE-HAVE A GREAT RIDE,” we were off! B quickly settled into a nice rhythm and sailed over the first 6 fences. Then came 7AB…the ditch to brush combination that I thought might pose an issue if I wasn’t paying attention. Sure enough, about 4 strides out, B spotted the ditch and started to hesitate, but it was nothing a good pop (ok, 3 pops) with the stick couldn’t fix. He quickly said, “Ok, ok, sheeeesh, I’m going!!” and jumped through the combination nicely. The rest of the course was a breeze. We crossed the finish line with a big smile! He was perfect. Watch the video for a few clips…including the ditch determination! 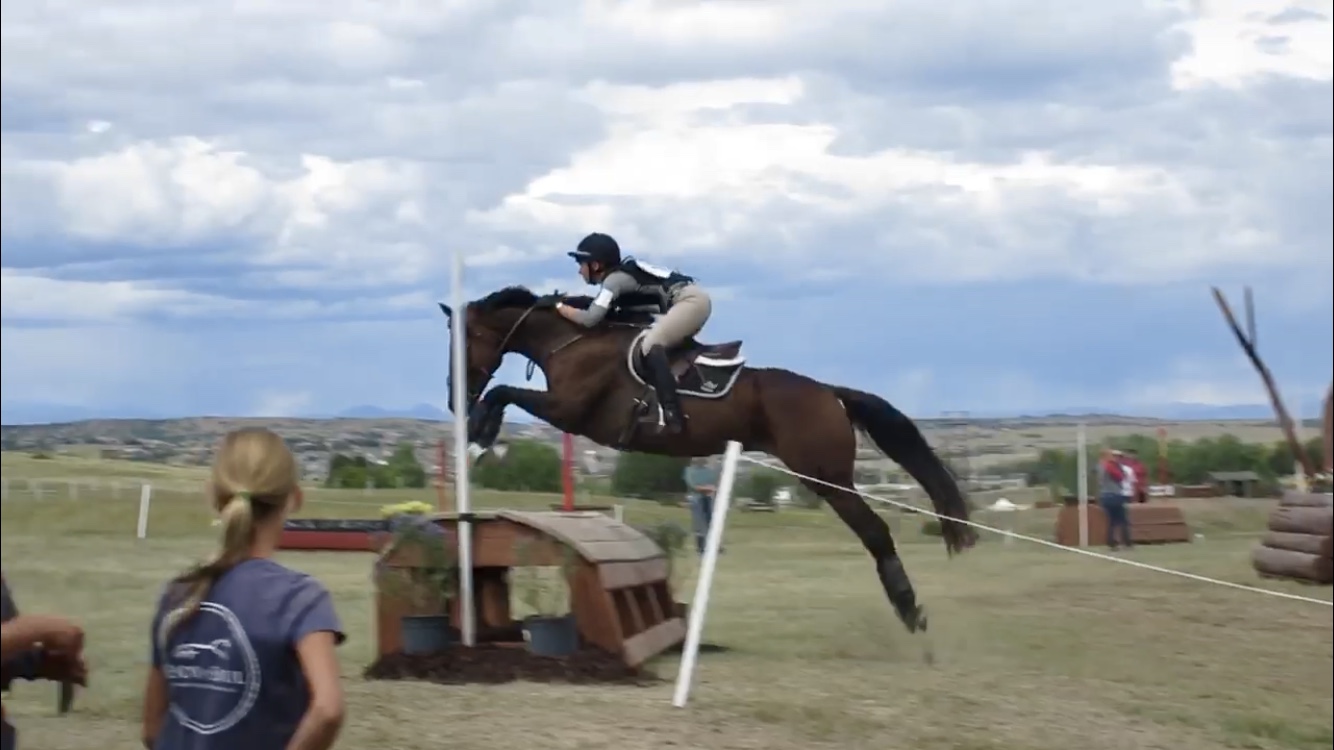 Showjumping is my least favorite phase. I always feel like I rely on luck when it comes to leaving all the poles up in the show ring, so it stresses me out and I should probably take a jump lesson when I get home. Bombay however, is an excellent show jumper. He’s fast, catty, and jumps with his knees touching his chin. When I walked the course I thought the lines walked long, so I knew I’d have to ride forward to make it down. We rode in reverse order of go. I was sitting in a good position in 8th place…not too much pressure but a good chance to move up the standings. We jumped the first couple of jumps and he felt amazing, ballooning over the fences like they were 4ft. Then, I got a short spot at fence 5. He jumped it fine but we landed close and I didn’t move him up enough, so got to fence 6, a vertical, on a half stride. Bless his heart, B tried so hard to twist himself over it but the rail ended up coming down. Bummer. We picked ourselves back up and jumped through the remainder of the course. Just 4 faults from the dang rail that was totally my fault. We weren’t the only ones that had rails down, so we clung onto our 8th place and Bombay got to do his first ever victory gallop with a gorgeous 8th place ribbon flapping around. He seemed pretty pleased with himself!

Overall, our AEC debut was a total success. B held his own amongst a very competitive field, and though there was plenty of room for improvement, I was so proud of him! We came away with a fabulous tan, an impressive looking ribbon, and plenty of experience. Perhaps we’ll qualify again and be back next year! 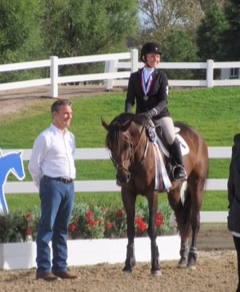 Importing from Europe: Yay or Neigh?