Guys. GUYS. I did it!!! I took Rio cross country schooling today.  Neither of us died. #success. He’s officially a hunter gone eventer (at least for the day!). If you read my post about no pressure quality time, you will already know that I’ve been wanting to get off property lately and do something FUN with Rio. XC schooling was just the ticket!

But in all seriousness, I had a freaking blast! An old friend of mine (we actually met back in my eventing days in high school, then we both ended up at the same college) messaged me Saturday afternoon to see if I wanted to join her and some friends to school cross country on Sunday. She knew that I’d been hankering to get out of the ring, and their horses are all very brave and experienced eventers. I jumped at the chance to go, even though it meant moving some plans around and begging someone to cover my hospital call for a few hours in the morning. The stars aligned though, because everything came together and I was able to arrange everything. I even found my old XC vest at the back of a spare closet (only took me several hours to find it hahha).

I woke up at an ungodly hour and set off. My trailer (aka my parent’s trailer that we’ve had since my junior show days that they let me use) still lives at their house because I’m too cheap to pay for trailer parking, so I had to go pick it up first. My dear hubby had to use our truck today for a different project so my awesome parents let me use there’s. I could get used to it, because it’s way nicer then ours and I’m considering stealing it.

Not gonna lie, I was nervous. Rio has never been on a trail ride, much less gone xc schooling, so I had pretty low expectations. Was I crazy thinking that a hunter gone eventer for the day was a good idea? As we headed out to the first field, Rio seemed really “up” and doing his best skiddish giraffe impression.  I figured if he hacked around calmly in the wide open cross country fields and behaved while other horses from our group rode off to jump that I would be happy. If we went over a few of the tiny logs, I would be thrilled.

I am excited to say that Rio delivered all that, and more! I should never have doubted him. Once I realized that Rio was totally cool about hacking in a big field, we started with some small stadium jumps (dipping a toe in with something we are at least familiar with). When he went over those so quietly it was verging on lazy lol JK he was totally lazy, I headed to a small log to see what Rio thought. He couldn’t have cared less. After doing it a few times we headed do a small BN sized roll top table thing, which he also went right over. At this point I was getting sooo excited and having an incredible time, and we had just gotten started. 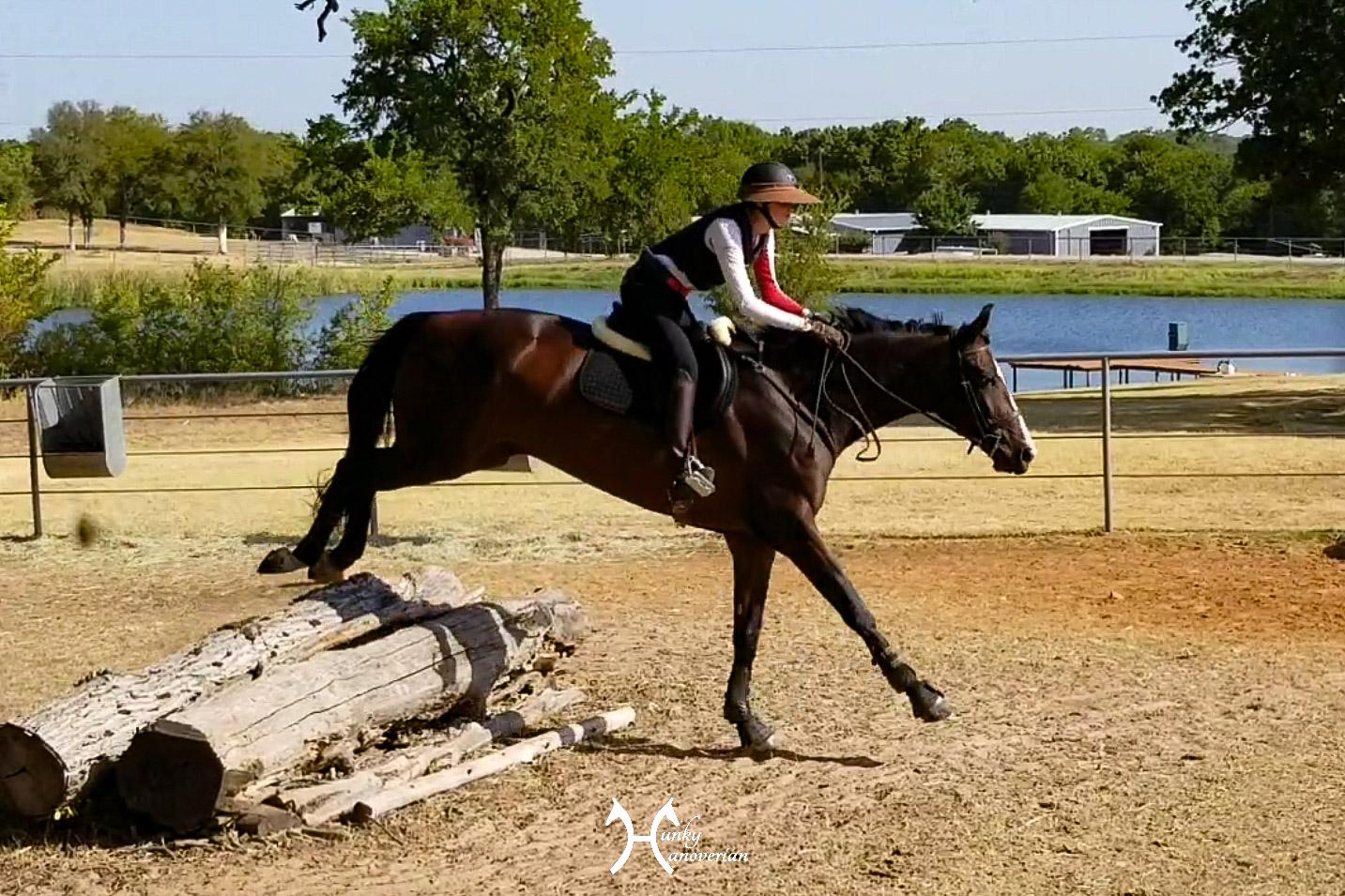 Long story short, he was awesome. Incredible in fact. Truly terrific. I could go on, but I won’t. I realized/remembered after a few small logs that you kind of have to get out there and gallop a bit. Once we got moving some, the jumps came smoothly. A couple of jumps we didn’t quite come up to very straight, and once or twice he kind tried to jump off to the side (but they still would have counted in an actual competition! Between the flags and all LOL).

The only jump he actually stopped at was a small Weldon’s wall. Considering we had just moments before jumped out first baby ditch, I think I got a little bit greedy asking for him to go down a hill and jump a fence with a ditch in front of it. I didn’t bring him back to it, because I realized I was maybe being a bit stupid and the grass was slick and he really wasn’t ready for a fence like that. We did go over the baby ditch again though, which was a much gentler slope and he gamely went right on over again.

Then I decided to string together some sizable logs for some fun. He was wonderfully brave over them, as he had been all morning. Then we we started to get a bit hot and I felt that Rio had done enough, so we quietly followed along with the group and cheered on the “big girls” over the big fences for the rest of the time. Probably for the best- I was getting quite brave at that point and eyeing some of the more straight forward training jumps. Maybe next time! 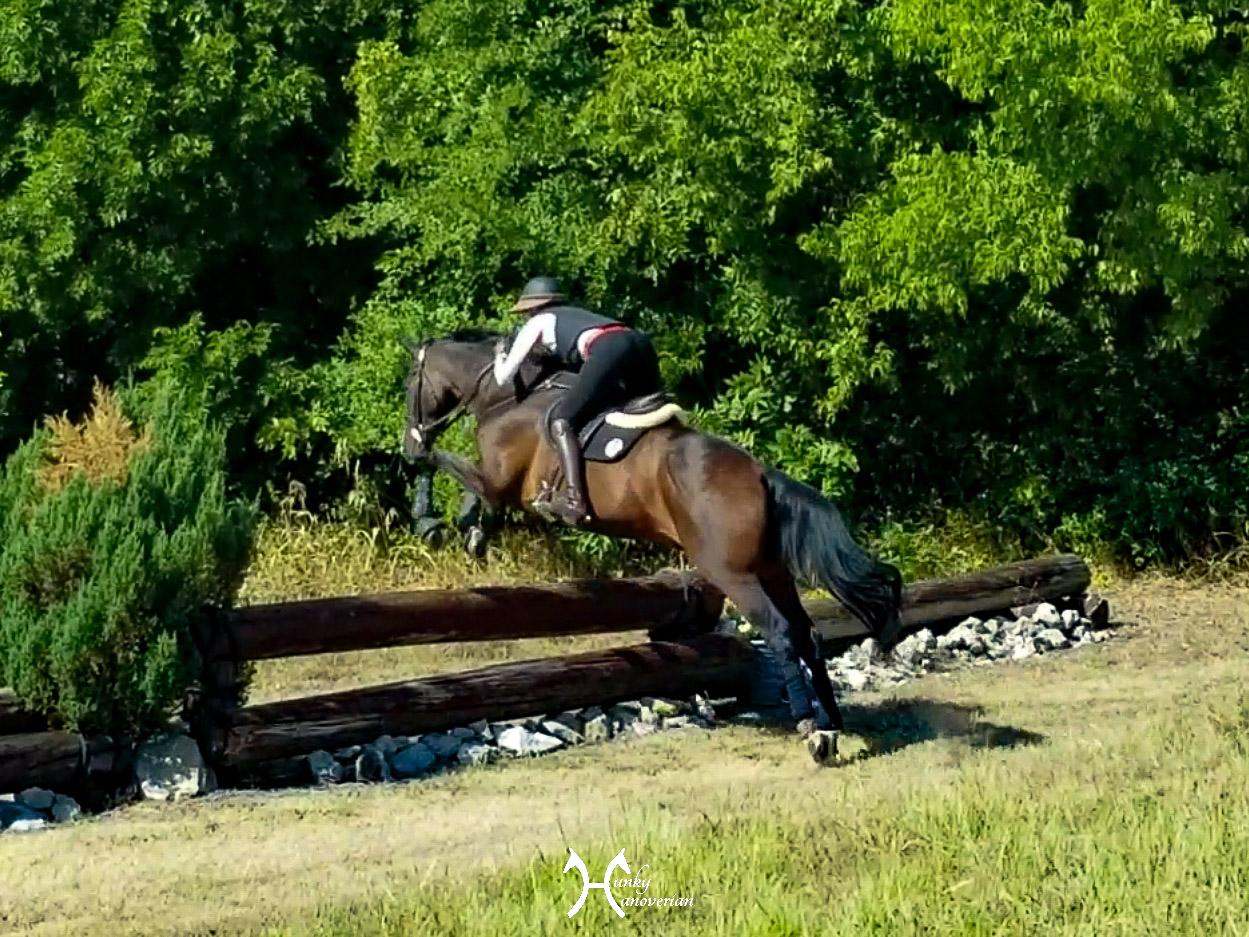 I can’t wait to get out again. I had forgotten how it gets your adrenaline going, and just how FUN cross country schooling is.  Getting to pick the jumps you feel comfortable with, and jumping around in your own time and just for fun is such a great experience for our mental happiness, and great for Rio to go over some varied terrain.

Best part? I think Rio enjoyed being a hunter gone eventer as much as I did. He was completely at ease out there. The videos show his first time over those jumps, there was no schooling them beforehand! I’d eye something that looked fun, pick up the canter and just go for it! He really enjoyed socializing with the other horses too, who all seemed to like him just fine. Down-side was the heat, but I think we managed it well (swinging by the trailers half way through to sponge him down with the ice water I had brought) and hanging out in the shade when weren’t jumping. I look forward to getting out more this fall, when it’s not 100 degrees outside.

Who else enjoys some cross training with their horse? Anyone else have a hunter gone eventer? What do you do? I just had the absolute best time, and I cannot thank Andrea, Grace, and Stephanie enough to inviting me along. I cannot wait for future outings with these crazy brave and talented ladies! Also a big thank you to Lori at Denton Creek Farm for allowing us to come school on her beautiful property!!!

Things Are Coming Together