Rio has been getting back to work in superb fashion. His abrasions are all much smaller or nearly gone completely, and his elbow is closing up nicely and shrinking every day. Although it has been raining enough to considering building an arc, I was able to get in the saddle a few times this week. MM met me out there on Wednesday and took some pics (THANK YOU). We were still taking it easy and didn’t do much cantering, so sorry for the endless trot photos. It started lightly raining at some point, which was magical looking because the sun was still out so all the rain drops glittered.

How magical is this summer evening sprinkle? I felt like I was in wonderland, with the light catching the water droplets everywhere! #HunkyHanoverian v.c. @mmrose14

I also hacked on Thursday evening, with a bit more cantering, and had another really good ride.

I rolled up Sunday for my lesson, and was told by some fellow barnmates the Rio had REALLY been enjoying his turnout earlier that morning. It was 73 degrees out with a COOL breeze, and apparently Rio approved of the weather change and was very enthusiastically playing with the donkeys.

My lesson went really well- first lesson since he has been back in work. I had opted for a private since I knew we wouldn’t be doing much jumping of any, and I felt like we could both use a good refresher. Rio surprised me right away with how good he was doing. His trot work was spot on, and he was very receptive to even the lightest aids. We really focused on straightness and self carriage, and also worked on lengthening and shortening with in the gait. We also played with bend and counter bend, focusing again on straightness and not losing the straightness of the haunches when I would asked for a bit more bend. I was able to get really good bend through the rib cage both directions with fairly light leg aids. It went very smoothly and I was so excited that he was feeling so good. I was also able to drop the contact completely for several strides at a time while he maintained and uphill balance and didn’t change his pace. 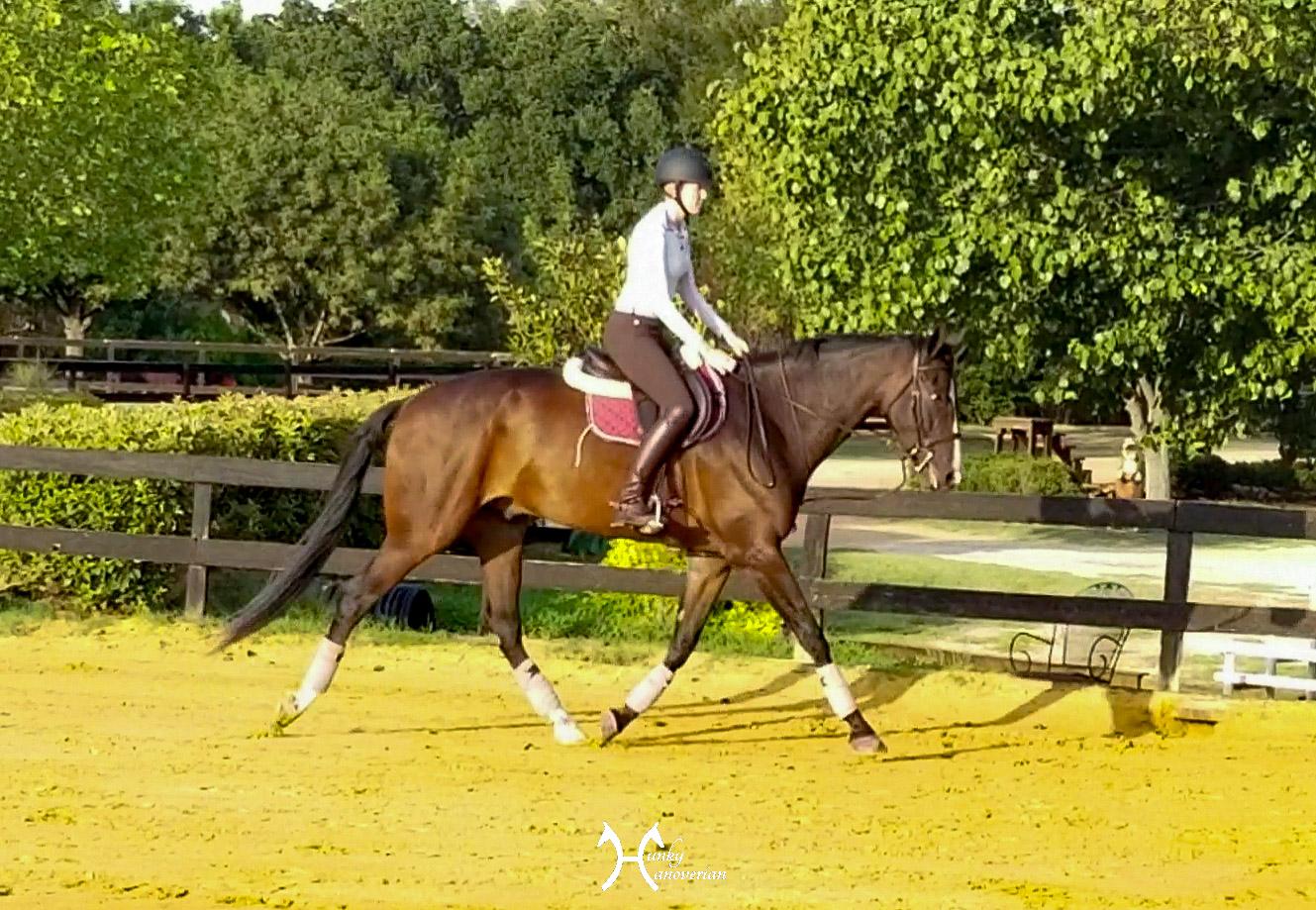 The canter work was a bit rougher. I an definitely feel that he has lost a bit of muscle during his 3 week hiatus. He started out pretty good to the right, which used to be his weaker side. Trainer had me going a bit more forward with more impulsion then I initially started with because he was wanting to tranter. Once he got going in a quality canter we worked more on getting him to carry his own step, and not fall apart when I relaxed the aids. He didn’t feel solid enough to drop the rein contact completely, so we played with giving one rein at a time for a few steps, and relaxing the leg as well. Basically, he wants to to keep your leg and and keep a feel on both reins at all time to hold him together, but I want a hunter that doesn’t make me work that hard, so we compromised.

The left was a bit harder. Usually his better side, he felt really locked in his left jaw, and a good bit heavier on the forehand that way. I talked it through with Trainer and she doesn’t feel that it’s a huge training hole or anything, she just felt like he was probably fatigued at that point, as we were nearing the end of our hour lesson. Regardless, I felt pretty pleased with how well it went, as there were still some really really good moments, and a lot of the instructions I received made a noticeable improvements. Really little things like opening my hands a tad wider at times, or using more of an opening inside rein made a big difference. Basically, I just need to ride a bit better and he will be better. Who would have thunk?

And drum roll please…. Rio had a SWEATY saddle and girth mark! I think the dip in temps is helping him sweat a bit finally, and I REALLY hope it continues to improve.