Troll Under the Bridge

Texas, Texas, Texas. Don’t get me wrong, we like the rain. But why you gotta be like this?  I rode two Sunday’s ago and then it rained all week and was too wet to ride again until this past Saturday when I trail rode, and then my scheduled Sunday lesson was rained out.  This is the weather forecast for next week: 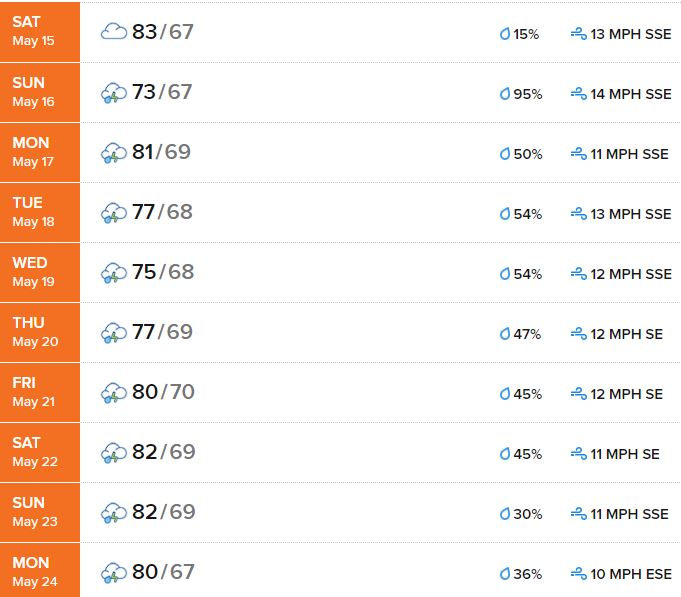 Chance of rain every day, and even if it doesn’t rain every single day, it’ll still probably be too wet to sneak in any rides. I POURED for hours on Sunday, and lightly rained again yesterday. This really isn’t helping with my plan to improve Rio’s fitness and build some muscles back up.

Me to Texas about all the rain in the forecast:

Texas in response to every Texan ever who complains about the heat and lack of rain:

Good news is our trail ride Saturday went fairly well. We are still struggling to cross the bridge to get to the trails, so I last minute asked my mom to walk down with us to try to help. Since she wasn’t prepared to come she was wearing flip-flops and neither of us thought to bring a lead rope. I honestly expected Rio to follow her across with no issue. He has at this point followed a random jogger across, and he knows and likes my mom aka the person who always feeds him. Anyway…  Rio had other thoughts about this plan.

I didn’t want my momsy to get stepped on so I pulled off my Ellany belt and tried to have her use that to lead us. It worked for a hot minute, but once we got near the actual bridge the answer was a hard no. Because he was acting a bit unpredictable and jumping around I had her let us go to see if I could work through it myself. I could not. So then I handed her my dressage whip thinking she could tap him when he tried to back up (one of his favorite forms of evasion). This also did not work. After struggling for 5-10 minutes and making no progress I was ready to hop off and admit defeat again. We tried one last time to get him to follow her, and he finally did (no lead required). I guess he was over the struggle at that point. Unclear to be honest.

How I imagine Rio views the bridge:

I really wish I knew why it was such an issue- he’s been over this bridge no less then 50 times, it is NOT new to him. I’ve lead him across dozen of times, and ridden him across with zero other issues when other horses are present.  I’ve become pretty confident when he doesn’t want to go, and have no issue applying my aids, but it just doesn’t seem to help. It’s like we have to fight about it for a bit before he will concede. And by fight I mean his front feet off the ground, spin to the left (which is towards home), and shoot backwards if I insist turning isn’t an option. Anyone have an animal communicator you LOVE? I feel like I’d totally try one at this point. If anything, I’d be curious what they’d say!

Once we crossed though, we had a great ride. There is about 5 feet of mowed grass on either side of the cement trail, and it makes for a perfect galloping lane. We trotted for a bit then cruised into a canter and just enjoyed the trails. Being able to trot and canter solo on the trails is really making my goal of getting him fit to jump again much more achievable, so that’s been really really nice. If the rain holds off today I *might* be able to sneak in a quick hack, so fingers crossed for that.