It’s official. Anything any trainer has ever picked on me about, trainer Stacie is going to get to with me eventually. Among the many positional corrections she has already addressed, a few weeks ago it was stirrup position on my feet, apparently I had them too much on my toes and not enough on my foot bed, she hit on a new one during Saturday’s lesson. Unfortunately, this one is not new to me, and this is not the first time I’ve heard it. I was filled with dread at her mentioning of it during our lesson on Saturday. This is a deep-seeded dread, because it is a positional flaw that I have long struggled with. No one has mentioned it in recent years, and I kind of assumed I had overcome it. But alas, it’s back to haunt me again. Or I should say, it probably never went away despite my best efforts during my college years.

You know when you’re first learning to two point how your trainer tells you to stick your butt out in an attempt to get you to flatten your back? I think I took that a little too literally when I was young. Now, I perpetually ride with an over-arched lower back. It looks like I’m always attempting to stick my butt out. I don’t even think about it anymore, it is just what comes natural to me now. When you over-arch your back like that, it becomes stiff and it’s hard to relax. Trainer Stacie has zoned in on this flaw of mine, much like the head equestrian coach did during my college riding days. I struggled with fixing it back then, and I still struggle with it now. 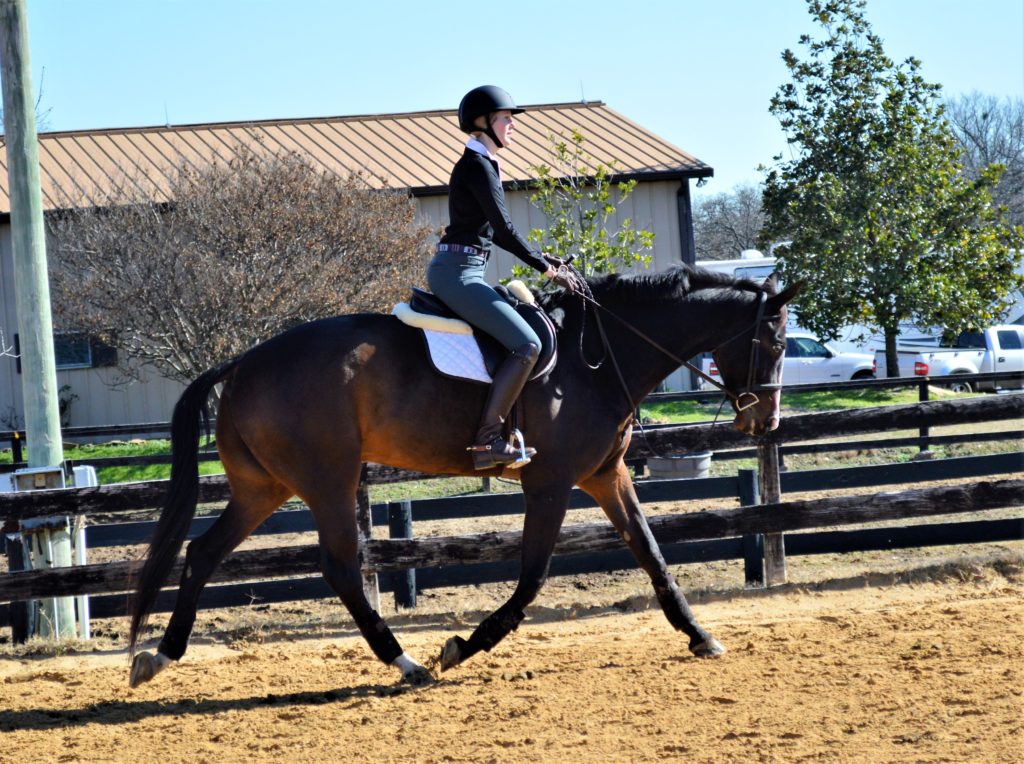 Essentially, my pelvis angle is tilted too far forward, and I have to think about bringing it more upright by tucking my butt under. A good mental image is sitting back on my seat pockets. It feels foreign and strange to me, but I could also feel a positive difference in Rio during our lesson. I could feel him coming back to me while staying rounder and more relaxed in the bridle, versus wanting to hollow out and fight my hand. I could also feel a smoother adjustment when we found a deeper spot when I thought more about rounding my back on the approach. Rio probably appreciates the softer seat that comes with a more relaxed lower back than I usually have, which is probably way he stayed softer when I would ask him to shorten his stride.

But, like any time I make a position change, I found it harder to see my distances. I was focusing so hard on keeping my back more rounded, and not gripping with my knee, that strides and distances were the last thing on my mind. I even accidentally did a 6 in a 5 stride line, which is a miracle in itself, considering I used to leave out strides on accident.

Changing something that has become muscle memory is always difficult, and I expect this one to be more difficult then most. I have known it’s a “problem” for years (I started college in 2006, which was when it was first pointed out to me). But, it’s such a small thing that once I was out from under the eye of my college coach I slowly let myself slip back into old habits. Now I am going to have to face this particular demon again, and maybe this will be time I vanquish it! Fingers crossed for me guys, this is one is a toughy!

What positional changes have you had to focus on correcting as an adult?

P.s. I finally got my own camera! (Thanks MM for selling me yours!) I will hopefully have pretty consistent media on the blog in the future. Big thanks to Liana for being an awesome paparazzi with an even better eye for a good shot!