Rio is on the mend, but still taking some time off so I had my lesson this week on one of the lesson horses, Mr. Cash Money. Typically ridden by my barn bestie Liana, I’ve seen Cash go plenty of times but I’ve never ridden him. I’m always excited to get an opportunity to ride and jump another horse, so I was really looking forward to trying him out. 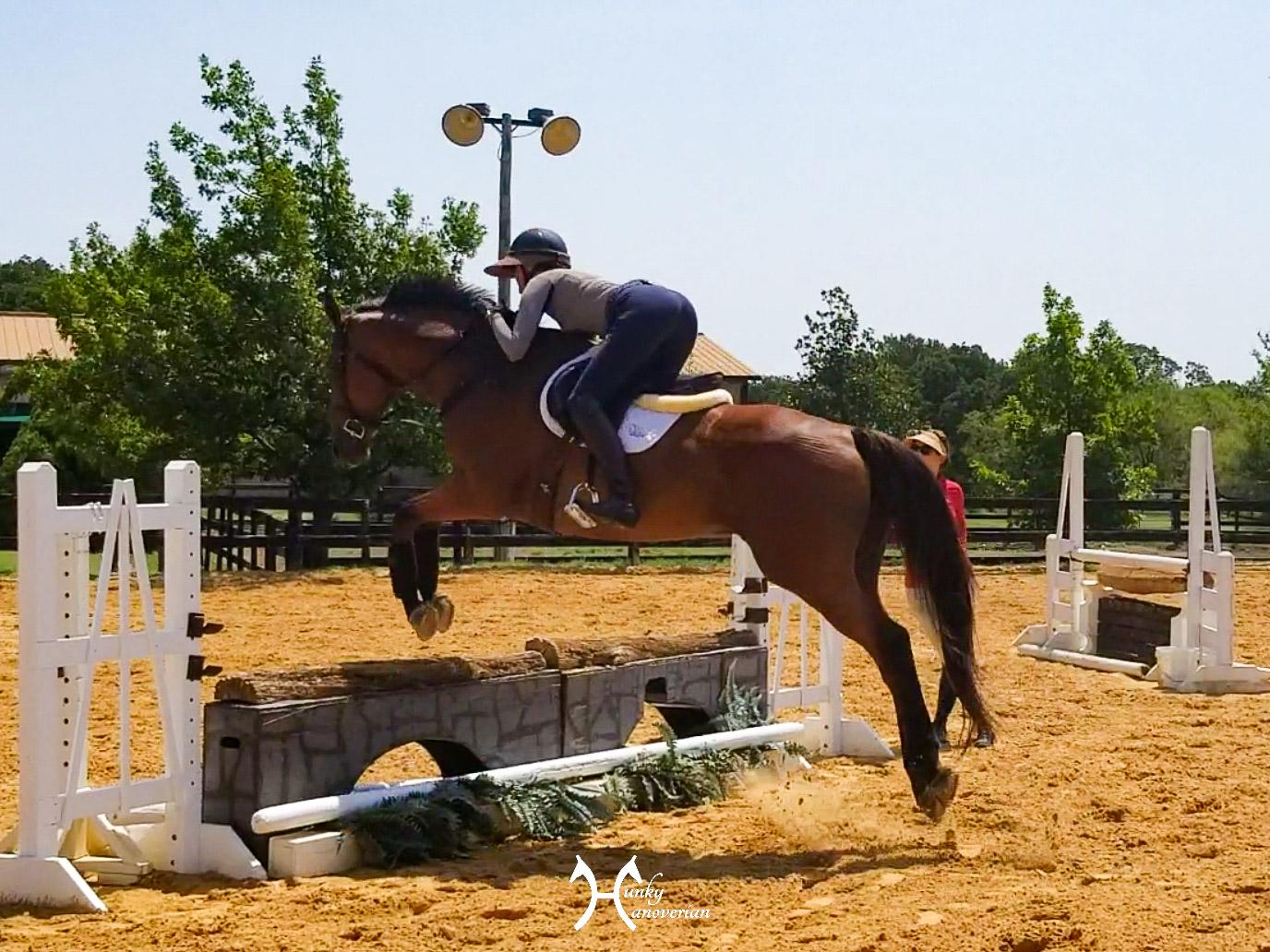 Cash did not disappoint! He is SUCH a good boy, it’s hard to believe that such a nice horse is available for lessons. You know what I mean, usually lesson horses are good souls but have some level of physical limitations and/or quirks etc. Not Cash! He’s a good size (considering I’m 6 ft), has cute gaits, a lovely soft jump, and easy changes. He is basically exactly what you would want in a 2’6/2’9 horse, and absolutely lovely to ride. 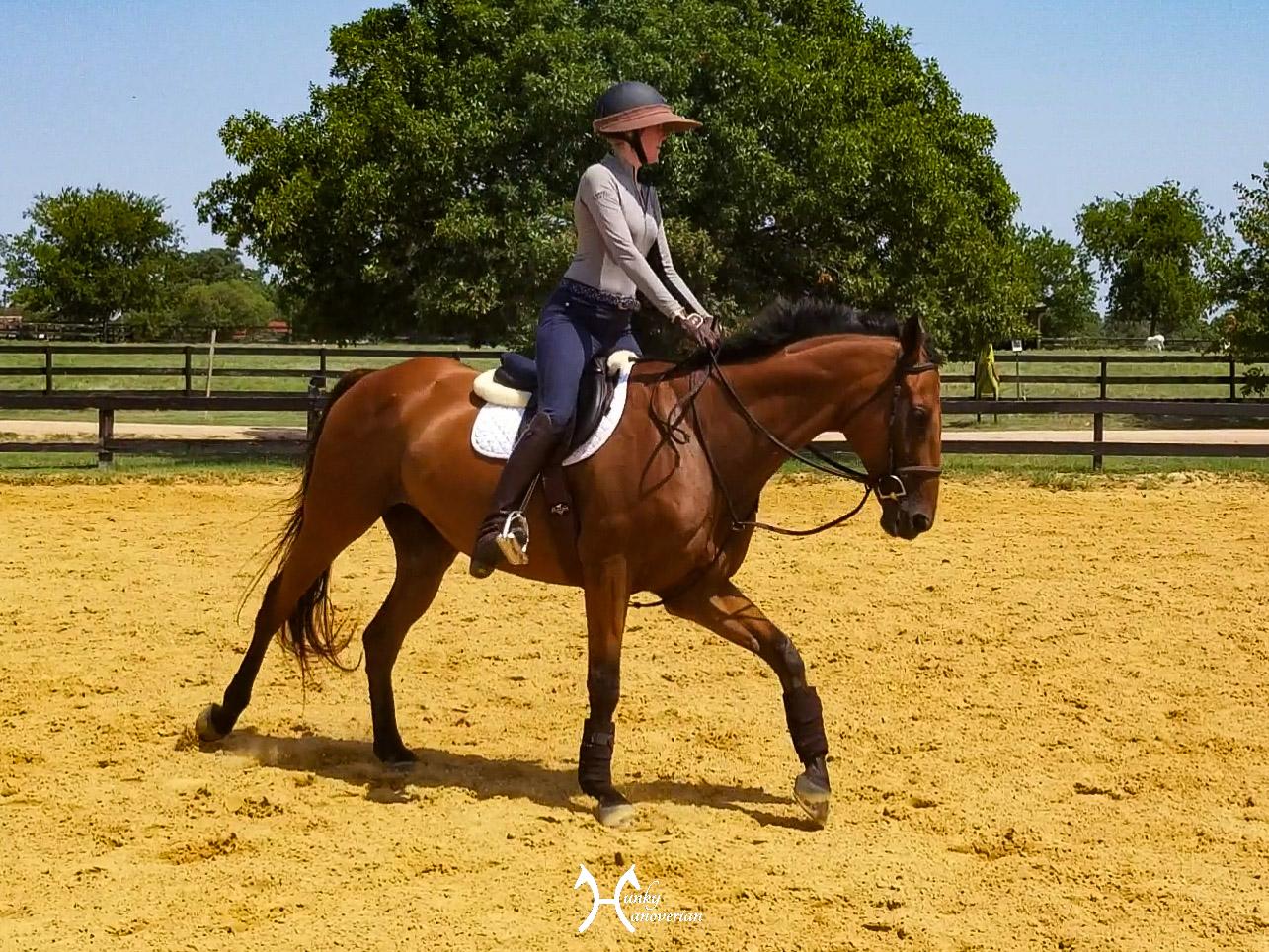 I felt sloppy as hell up there, because it was a million friggin degrees (I lessoned at NOON), and he takes a bit more leg then Rio. Thank goodness for my Voltaire saddle that basically holds me in place, and that Cash is just SO GOOD. Even though I felt like a sack of roasting potatoes up there, I still had an amazing ride. Cash instantly responded to all my requests. When we got a bit of a long spot to a fence all it took was a hair more leg and he took it easily. When we got a bit deep, I sat quietly and a bit taller and he easily fit it in. All I had to do was THINK the change and he gave them easily (compared to Rio’s changes changes which are still very much on the struggle bus). He’s not exactly an auto-changer, you do have to make sure he is set up, but he does them superrrrr well when asked correctly.

Man it was refreshing. I love Rio to pieces of course, and I do not think he is a difficult ride at all, but Cash was totally different. He very much does his job if you push the right buttons. This is the kind of lesson horse that is worth his weight in gold, I kid you not. If you get your shit together and ride him, he will go perfectly every time. Considering I was half blinded by sweat in my eyes and considering passing out towards the end, he carried my butt around in the most perfect gentlemanly fashion. I officially adore him.

After my ride I bathed Rio and doted on him. The drain by his elbow sutures was removed Friday. The vet decided he DIDN’T need a stifle x-ray (YAY!) because he seemed totally fine. Liana helped me trot him a bit so I could take a look, and I think he looks 100% sound as well. Sutures come out this coming Friday. His leg wounds already look better, and the swelling is basically gone. The left hind medial wound (the site of his previous surgeries) actually doesn’t look too bad. Or at least better then I initially thought. Fingers crossed everything keeps healing well and that he will be ready for some light riding soon.

I think Rio is SUPER ready to be back to work. He’s been getting a bit pushy/rude on the ground, a definite stray from his normal personality. When I was washing his face, which he is usually fine with, he BIT ME. HARD. On the pinky. I was shocked. He has semi nipped before (like maybe 3 times in 2 years) but he has never bit me hard before. I am slightly embarrassed to say that my knee jerk reaction was to just look totally shocked and scream, “YOU BITCH!” at him. Ya… the guys all stopped what they were doing and stared at me awkwardly. #mybad. First rate horsemanship right there. Rio gave me the haughtiest look he could muster too.

Fingers crossed that we have averted major catastrophe in the injury department, and that Rio is back under saddle soon (for all our sake’s). Until then, I have another lesson on Tuesday. It may be on Cash again, or on another lesson horse, we will see!

**Giant thank you to Liana for coming out in the million degree heat to get media so my reader’s don’t die of boredom!**