Last Tuesday evening I was idling in my car at Bay Yard (my barn where I still ride even though Rio is home at my parents’ house) waiting until it was closer to time to get ready for my lesson when my phone rang. It was my mom. She sounded dire with the first words out of her mouth being, “I think I tried to kill your horse”. UH OH.

Turns out she didn’t try to kill him really, but something was definitely up. Occasionally, she uses one of our neighbor’s pasture to graze the horses. They used to have horses but don’t any longer, and have a few acres of lovely grass and a pond. They don’t have as much shade as we do, so my mom and I had recently discussed her not taking them over all day anymore, for fear of Rio over-heating. We decided a few hours in the morning would be ok, but that she’d bring them home in the early afternoon when the temps start to sky-rocket. We have more trees in our pasture, plus the barn is open with fans, a port-a-cooler, and a misting system so they can cool down whenever they need to.

Well, my parents were about to leave town and she wanted them to be able to graze as much as possible before then. For that reason the horses were next door from 10-5pm. When she went to go get them she said Rio was flat out in the sun, not responding as she screamed his name. She was able to get him up and walk him home and immediately started hosing him in-front of the fans. She said he seemed lethargic but otherwise ok. After a quick call to my vet, she did let him graze and continued to hose intermittently.

Once the panic subsided she realized his right hind was pretty swollen and very painful to the touch. Better safe then sorry, Dr. M headed over. After assessing Rio and giving him some banamine, she instructed us to treat it like a colic episode and worry about the leg tomorrow. We wanted to make sure the rest of him was fine first. My mom carefully watched him overnight (yes, she is the best mom), and I found myself checking the barn camera every time I woke-up from a fit full sleep. He was 100% normal, and never gave any sign he was colicking, thank goodness.

Out of the colic woods by morning, his right leg was significantly more hot, painful, and swollen. The theory now is that he wasn’t necessarily overheated, he may have laid down due to the pain in his leg. Not saying he wasn’t hot, but I don’t think he was significantly overheated. Earlier in the morning he had been playing in the pond. Although I am vigilant about fungus on his legs, he does have a few tiny crusties here and there, and it turns out he had developed a significant case of cellulitis. Somewhat of a drama queen, I can only imagine that he laid down to die due to the pain in his leg. Once he received the banamine, he was more then happy to walk around and graze again.

The next morning I let Dr. M know he seemed fine colic-wise, and planned for her to come  back out to deal with the leg. By the time I got there, it was hugely painful and swollen. It was definitely clear he needed to be started on meds asap. Good news was that even with zero pain meds on board he will still willing to walk around on it and graze. He also still had some definition in his leg, and it wasn’t weeping any serum yet. So as far as cellulitis goes, it didn’t seem to be too severe of a case.

Video of his leg the evening we started treatment. This was it at it’s most swollen.

5 days of gentamicin, overnight wrapping, bute 2x/day, and icing 2x/day, and his leg is almost back to normal. This is how it looked yesterday evening (day 5): 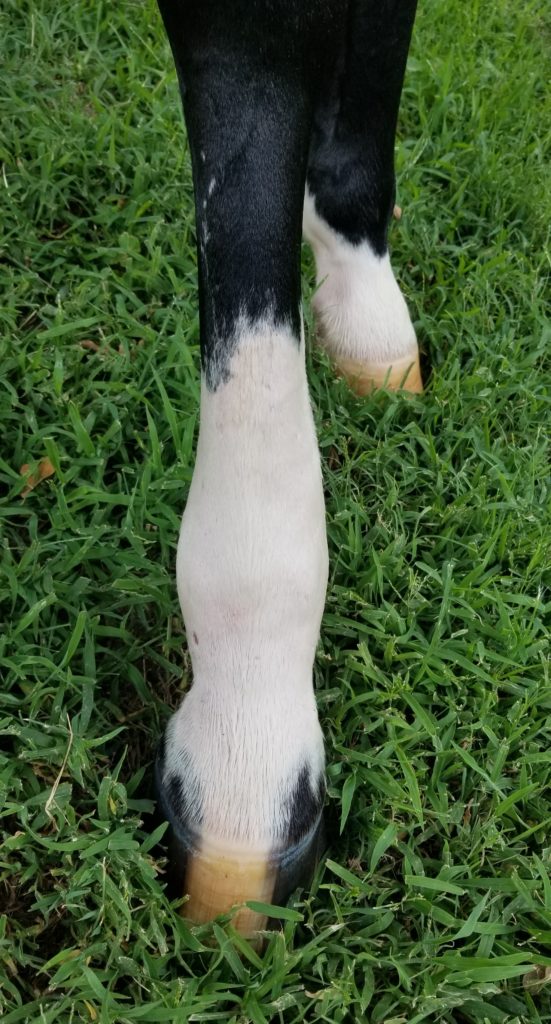 Basically, it’s back down to the swelling level on the initial day of his almost-death, when the cellulitis was first taking a hold. It might even be a little better. It’s definitely still there, like a level where you can confidently say, “yep, it’s swollen!” but not to where it is painfully stretching his skin anymore. The swelling in his hock and upper cannon bone areas is all gone. and it has mostly settled to his medial and posterior pastern area. He also no longer seems sensitive to palpation of the area, and doesn’t mind me messing with it. It no longer feels warm to the touch, and he is moving around on it fine.

Hope it continues to clear up in the next few day!

Can horses live in bubble wrap?!