***This post contains some graphic images of equine wounds***

I realized the other day that I never did a follow-up on Rio’s 2 surgical sites for you guys. Equine wound care can be a crazy stressful journey, and y’all were SO supportive during the entire process, I still can’t thank everyone enough. It was a really rough patch for Rio and I, and it was hard to keep our spirits up at times. The encouragement I received from the blogging community was tremendous, and really helped make a difficult time more bearable. THANK YOU!

For my newer readers, here is a little re-cap:

End of May 2017 something poisonous bit Rio’s medial right hind legs. I do not know if it was a snake or a spider, but I refer to it as his spider bite out of habit. It necrosed, and caused a huge awful hole.

It took about a month and a half, but slowly healed up, and I was even able to start riding him. A few weeks into riding him again (mid August), he came in from turnout with the wound broken open and bleeding. Turns out he had broken the distal portion of his right hind splint bone. He had surgery to remove the broken portion, and to clean up the spider bite wound site (the fracture and the wound were in the same area of the leg).

During the surgery, the surgeon and I decided he would also do a wound revision of an old surgical site on Rio’s distal left hind leg. He had a non-healing area from a surgery about a year prior. The surgeon felt that cleaning up the tissue and suturing it shut would allow for it to heal better. I have TONS of posts showing the healing process of both areas, but here are a few of them at their worst in the healing process.

So where are we today?

The right hind looks about the same. It is healed over, but it develops a scab sometimes that eventually falls off and a new one will appear. It never bleeds or drains. I do not wrap the leg anymore, unless I am riding (during which I use a polo wrap). Sometimes it holds a bit of puffiness around the pastern, but it goes down with turnout and riding. I feel pretty confident that it will take time, but eventually will heal all the way. 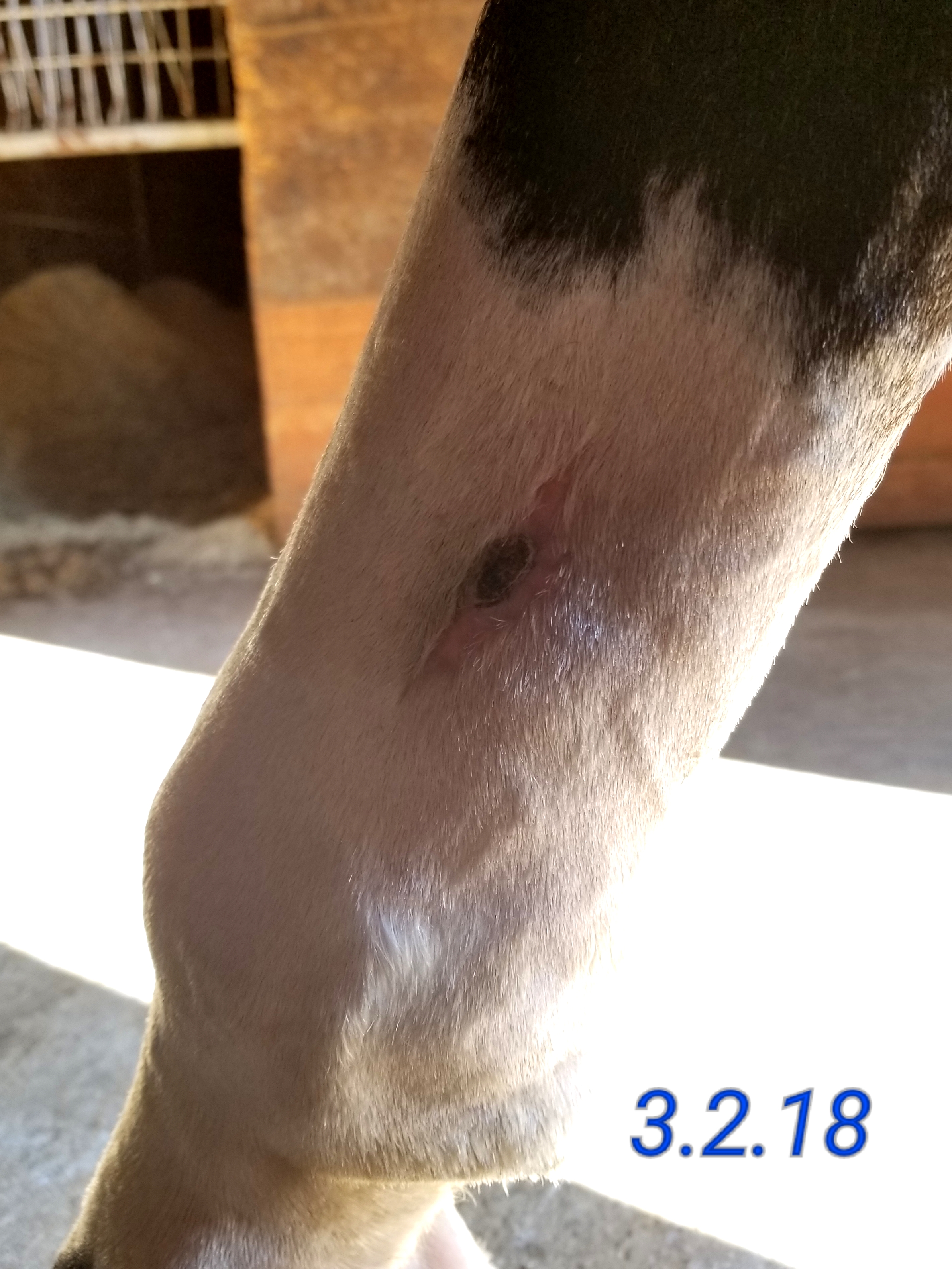 The left hind is also doing well. It developed this flaky, semi-hard type of tissue over the area. If you pick at it, some of it will come off. If you try to remove too much of it though, Rio gets pissy. It doesn’t drain or bleed or anything. I cover it with my  EquitFit boot with the custom extender liners to protect it when I ride. Other then that, no special treatment. I also feel that it will become less obvious with time. Guys, I had no idea equine wound care was so involved, and how much it leaves you second guessing your every move. I am beyond happy that these wounds look as good as they do now, even though they aren’t perfect. It’s hard to look at the old pics and remember how bad it was. 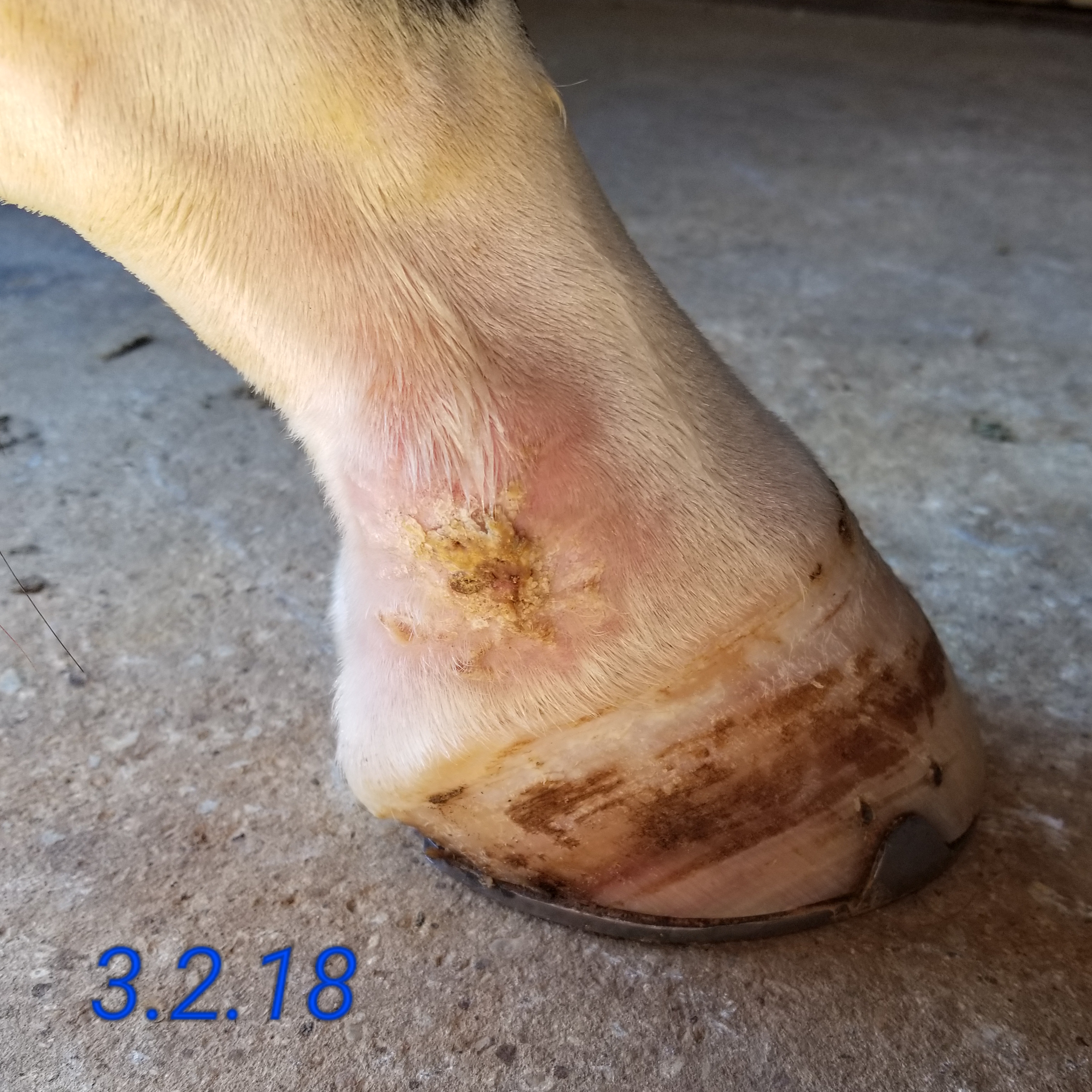 And just for fun, here is an adorable pic of Rio meeting one of Bay Yard’s resident mini donkeys! 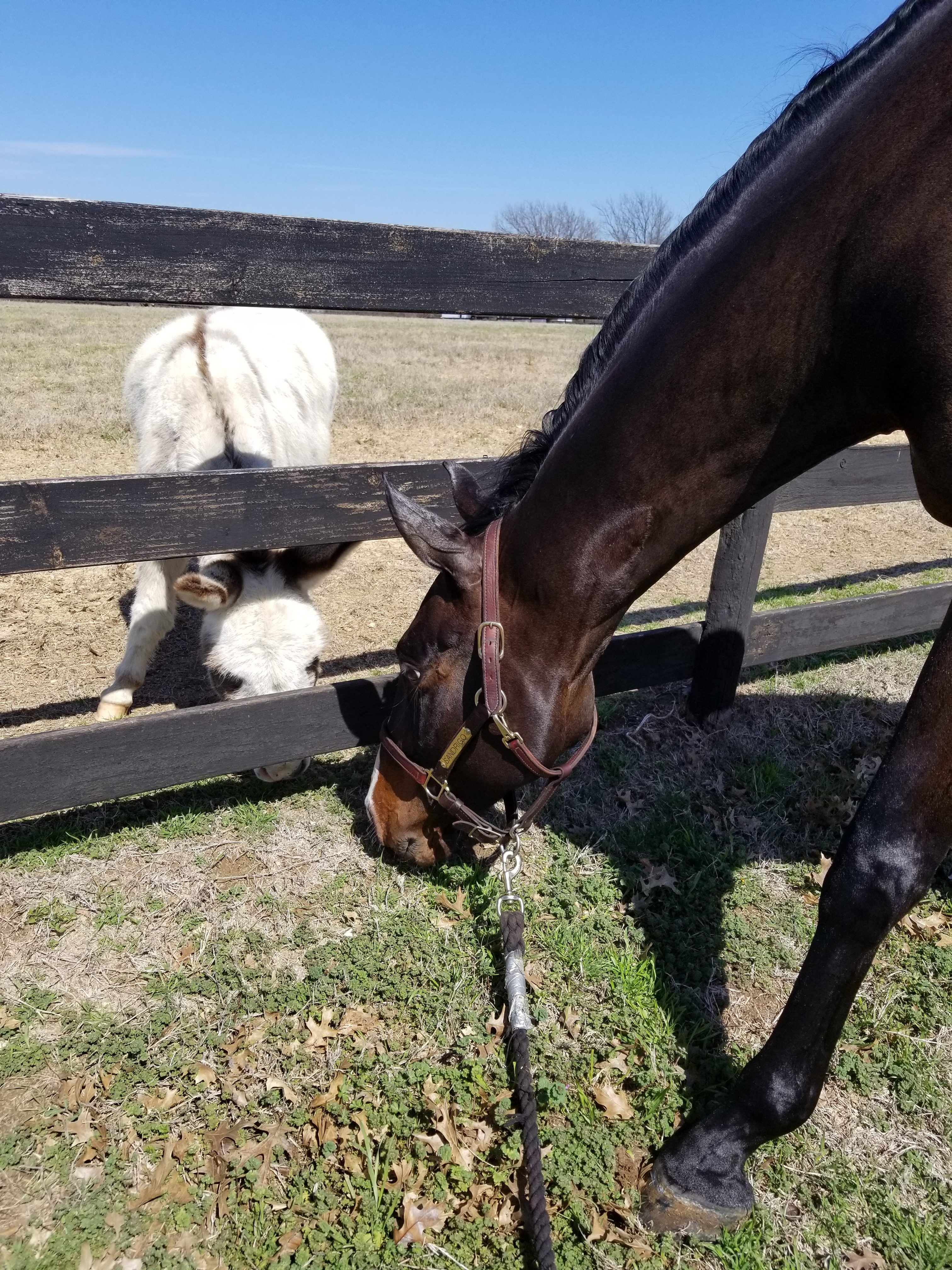