On Tuesday something miraculous happened- I had my first ride back on Rio in over 6 months. But wait, maybe I should start with Saturday. 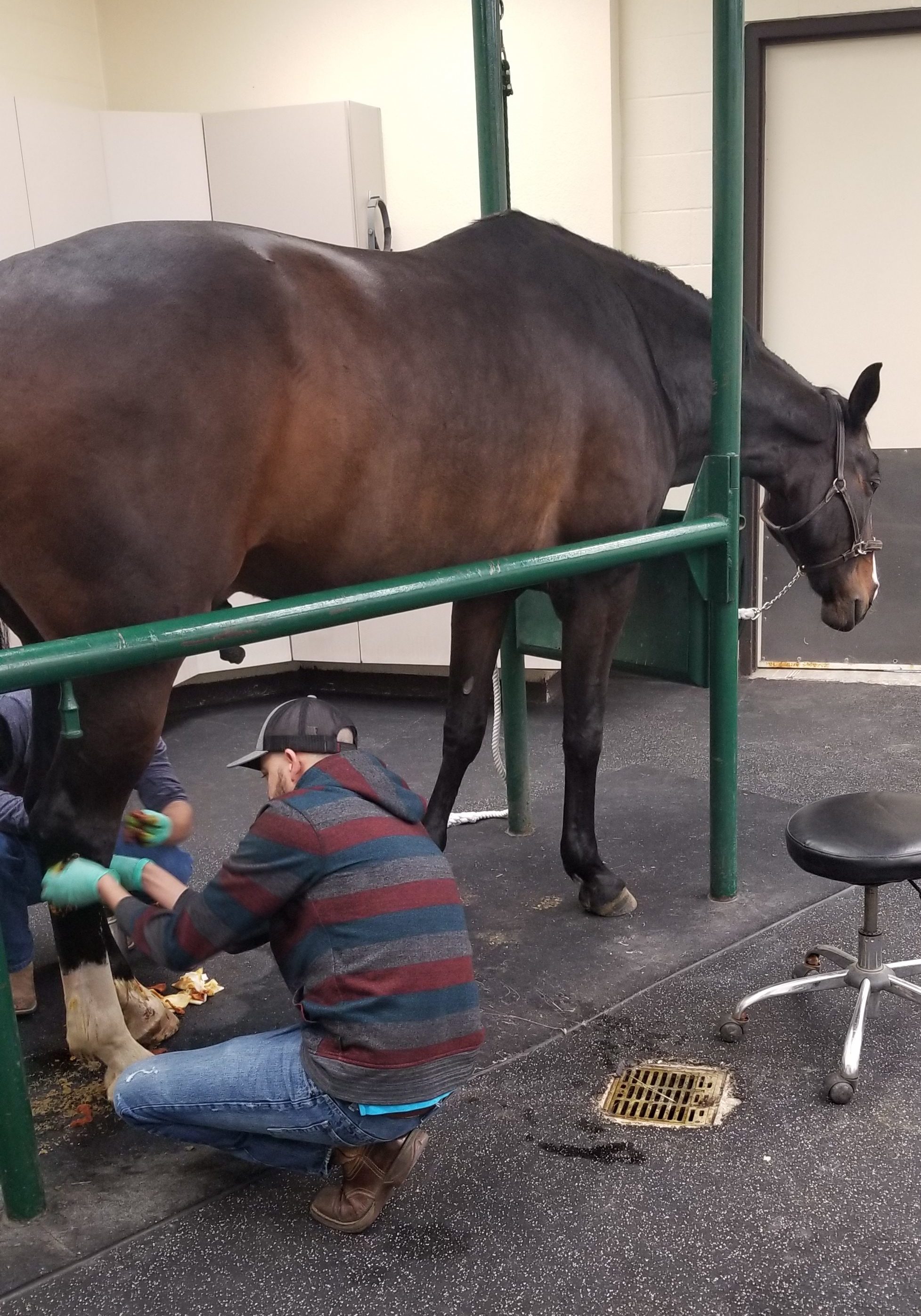 On Saturday Rio had a vet appointment to do an ultrasound of his hind suspensories and for hock injections. First thing the vet did was give me some serious shit for how fat Rio is right now. I swear we have been cutting his grain, but after he said that Rio is going to get bullied by the other horses it was clear that he will now be going on a major diet. Back in November he couldn’t stop talking about how good he looked, so apparently we have crossed the “hunter chunk” line. Don’t worry Ri, I’m right there with you packing on the quarantine 15!

The ultrasound had it’s ups and downs. I’m a human sonographer IRL, so I am always fascinated by all things imaging- especially ultrasounds. Not all vets have the same level of sono skills, but my vet is fantastic. He did the scan and there was some definite improvement in some areas, but not a miraculous full recovery( (which neither of us were expecting). But, he did deliver some good news- I could start riding him. We are taking it easy and only walking on hard surfaces for now, but the vet feels strongly that Rio will be fine to do 2’6 and below lightly in the future.

After the sono, he injected his hocks which went really well. For optimal healing of the suspensories we don’t want him compensating due to hock pain, so routine maintenance of those is really important still.

On Tuesday we had our first ride back. Rio seemed a little confused when I brought his saddle into the stall, and his girth BARELY fit, but I somehow managed. He did look a little perturbed at the girthing process.

No ace, no ear plugs- nothing! He was a total gem. Walked most of the trail on a loop rein, and didn’t bat an eye when cyclists would pass us. I’ve lead him on the same trail a few times, so I felt pretty confident he would be this good, but I was still beaming with pride the whole time.

He is sweating well right now, which I always love seeing. I am trying Platinum Refresh this year to try to maintain sweat in the heat of the summer. Good news is that even if he stops sweating my parents’ barn has a cooling system that built because my little sister’s pony also had anhidrosis. Rio will have a swamp cooler, a misting system, and multiple fans to keep him comfortable this summer. 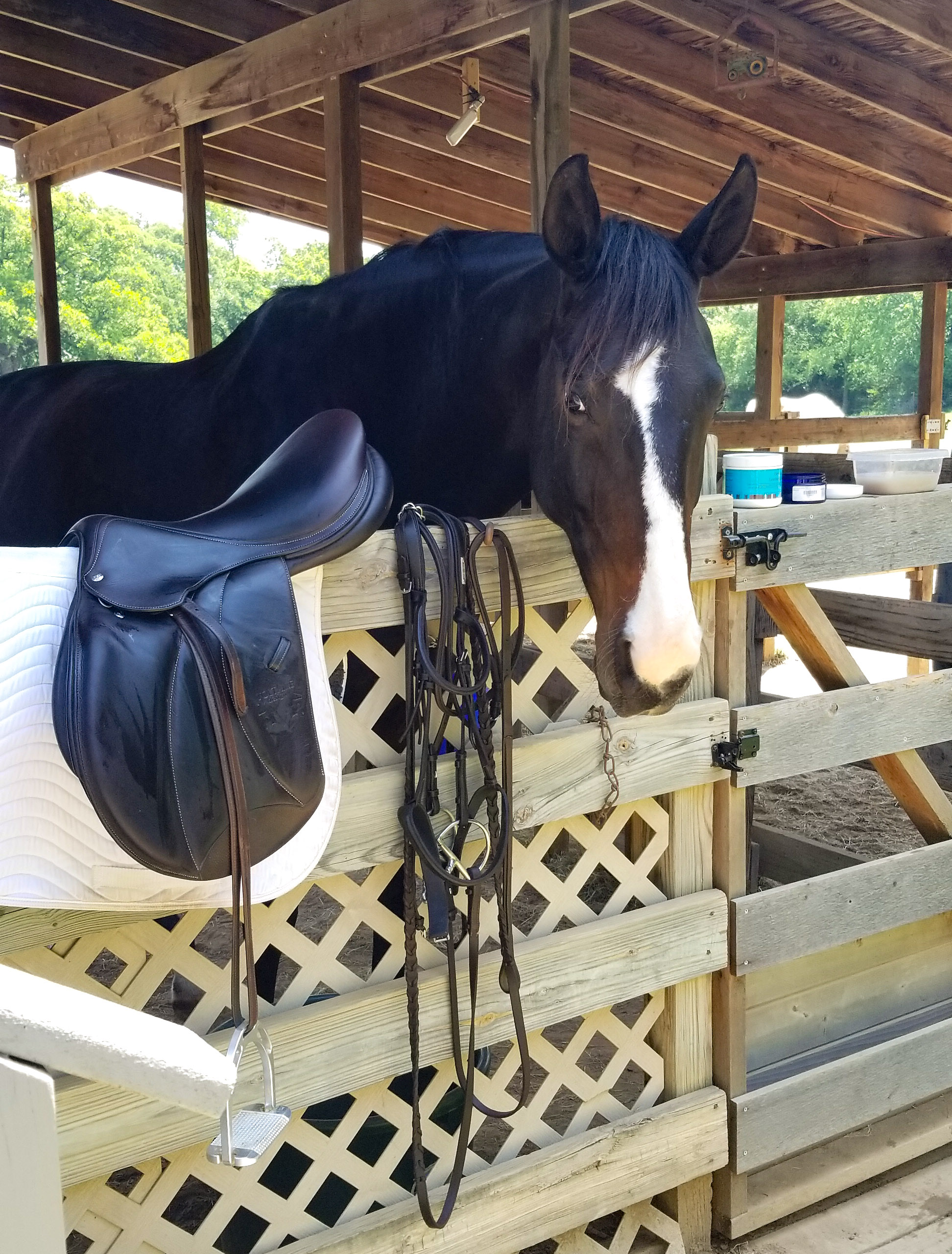 Post-ride I gave my tack a thorough deep cleaning and conditioning which felt SO GOOD. I literally love cleaning tack- yes, I am a weirdo. I especially love doing it in nice weather, where I can spread out my shit everywhere and not worry about being in anyone’s way. Rio is such a puppy dog that he hung out with me the whole time too, so the company was pretty good as well.

So that’s the update! I’ll probably try to take him for a walk 2 days a week for now, and probably stick to the walk only for a couple months. He gallops and bucks in the pasture and looks as sound as can be, but I’m convinced that slow and steady for the remainder of the year is the way to do it when it comes to under saddle work.