It’s not always sunshine and daisies

I have been MIA lately.  As it turns out, I’m not very good at blogging when things fall apart. I don’t like to talk about disappointment, sadness, and the hard stuff. I constantly describe myself to people as a happy person. My horse is REALLY important to me. Anyway,  I promised myself this would be short so I’ll get to it.

This is the abbreviated version!

I rode Rio the Thursday after the show. He was good, a bit unmotivated, but I didn’t blame him. I was still feeling the horse show hangover a little bit myself. He had Friday off and I headed out there Saturday for my jump lesson, excited to build on what we learned at the show. 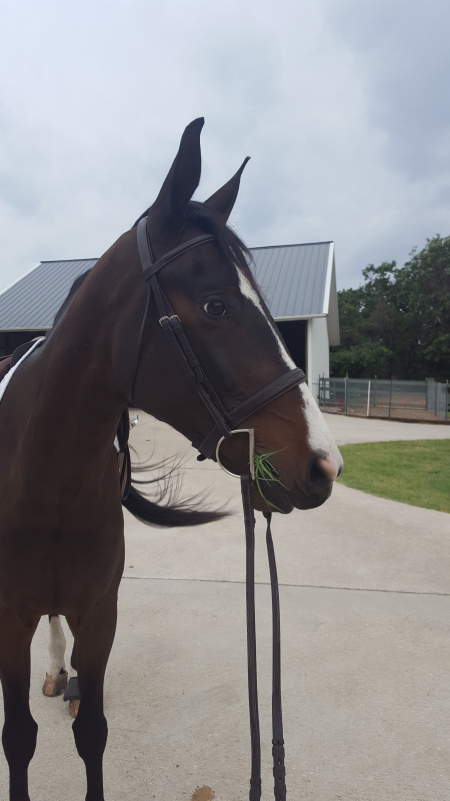 Trainer called me on my way out there to tell me his right hind was very hot and swollen. She had already called the vet. Trainer thought it was likely cellulitis but we wanted to be sure. We took xrays and immediately discovered that his sesmoid bone was fractured. He has no external marks on the leg, so it seemed likely he kicked his stall just right. I was devastated. 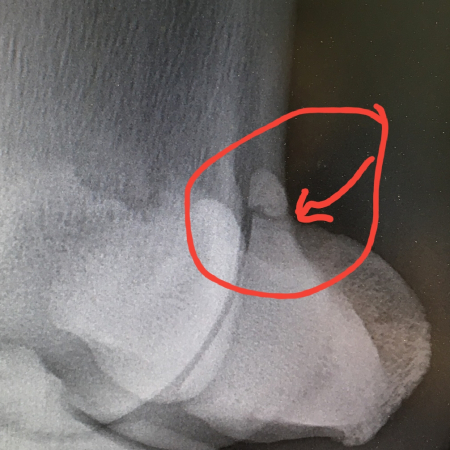 We immediately put him on stall rest and started sweat wrapping the leg to try to decrease the swelling, with a plan of re xraying in 10 days to assess his progress. Two days later he seemed good, a bit off his food but was hand grazing happily and seemed in ok spirits, minus being locked in his stall all day.  The next 2 days (Tuesday and Wednesday) he went down hill a bit. His leg continued to swell despite the wrapping, getting higher and higher up his leg all the way to the stifle. It also REALLY hurt him. He seemed in way worse spirits and was eating less. Wednesday evening when M unwrapped his leg she found a new lump on the medial leg. Amazing Vet was called.

It drained a purulent liquid. Pretty icky. So… what the crap?! Does he have a broken leg or raging cellulitis that somewhat blew an abscess out the side of his leg? The fracture had some signs of possibly being old, which is also what the vet who xrayed him said (same practice, different vets). We disregarded it at the time though, because the symptoms seemed to match a fracture.  Amazing Vet (AV) re-xrayed it and the fracture looked the same, so we weren’t looking at a sequestrum. AV put him on antibiotics and said that he should be a lot better by the next day if we were looking at bad infection.

Sure enough Rio was much better in 24 hrs. Eating normally, moving much less painfully.  I got to visit him that night (Thursday) and hand graze him and he seemed fantastic and in really good spirits.

He is still doing relatively good. The wound is really gross and draining a ton. Amazing Vet has been visiting him a lot, and considering all the differentials. At this point we think the fracture is old, and an incidental finding, but we can’t be sure. What we do know is that he responded to the antibiotics (leg way less painful, swelling went down, appetite returned) and he has a gaping hole in his leg that has necrotic looking tissue. It is draining a LOT still and we are not sure why, but monitoring it closely. AV has consulted with some really great surgeons that I know and trust and everyone agrees we are on the right track, it’s just a puzzling case. Tomorrow she is coming again to check him, and we will be putting him on a more intense broader spectrum antibiotic.

So you are probably wondering what caused this. Well… so are we. Snake bite? Spider bite? We suspect something with poison because the wound is bad and looks like it is going to get worse. The tissue is necrosed and we don’t know why. We are crossing our fingers that with time (and meds!) he will continue to improve and hopefully we will start to see some wound healing. In the meantime we are taking every precaution to keep him happy and healthy. I switched his supplements so now he’s on Smartpak Gut and Rehab supplements. He is getting omeprazole (ulcer) and probios paste daily.  This new antibiotic is pretty strong so we are trying to make sure his tummy stays happy and healthy.

Anyway, I have tried to write this post about 5 times, and here it is, finally sticking! Everyone goes through tough times, I just kind of suck at it. I am staying hopeful though, it helps to be surrounded by such incredible people. Amazing Vet, Trainer,  and M (who takes care of the horses) have been so supportive and helpful, I can’t thank them enough.  Every one of them cares about Rio as much as I do, and wants the best for him. Hubby gets a huge shout out too for letting me sit on the couch all last weekend (when it all started) and feeding me Mac and cheese and banana splits when I cried relentlessly and binge watched bad TV. Trainer has been letting me lesson on and ride her wonder horse as well, so I promise to post soon with some fun pics and video of Cascai.