If you haven’t yet, check out Terri Cage Part 1 first!

Ok, where were we? Oh right- we had just arrived at Red Hawk Ranch for the shoot. Horses unloaded well, and we got them set up with their hay nets while we figured out what the plan was. Terri arrived around this time and explained that there would be multiples photographers shooting multiple ‘models’ in various locations and to just get ready and jump in whenever.

Joanne and G were first up just as the sun was rising. It really looked beautiful with the pond in the background, which was really full thanks to recent rains. Terri Cage was giving the photographers in training lots of tips about how to use the light and get the best shot, it was actually super interesting to observe. I cannot wait to see how those pictures of them turned out! I did have a little moment where I was laughing hysterically to myself- Jo was wearing these adorable blush colored strappy kitten heels… and 100% sinking straight into the overly saturated mucky ground. I thought for sure was going to eat mud. I know that I would have if I had been wearing those shoes- Rio was a total nightmare the whole time.

Not kidding- he was psycho. Spinning around me constantly, neck STRAIGHT in the air, gaping his mouth as wide as possible, and in between gaping he was doing his best mare face impersonation. I am unclear why he was so jazzed up, since he is normally so chill, but I guess I can only assume it what the new place a busy atmosphere. I kept trying to bring him back to the trailer and his hay net to see if he’d calm down, but to no avail. He was just as anxious/high strung the whole time. Fingers crossed that Terri Cage and the other photographers were able to get  a few decent shots where he doesn’t look like a llama.

After the portrait style photo sessions were over, I tacked him up and got on him, hoping that I didn’t end up in the dirt. They were hoping to get some over fences shots. I thought that Rio would be insane for sure, but once I got on him, he calmed right down. His brain may have fallen out of his skull when I was on the ground, but I am thankful that he put it back in once I was in the tack. We warmed up in their covered ring, and he went right to work, even displaying his lovely tranter that he likes to attempt to get away with instead of actually carrying a quality canter. They wanted to take photos in the outside grass jump ring, but we weren’t sure about the footing. It seemed ok at first, but as soon as I got going I decided against it. The grass was ripping up too easily, and I didn’t want to risk even the mildest of injuries over a few photos.

When it was time to go, Rio did not want to load. Again. It took maybe 20-25 minutes and some pretty firm butt spanking with the crop to get Rio to participate. Once we instilled in him “forward” and made him realize that stopping wasn’t an option he did finally step on up. It was annoying but not terrible. To avoid having to repeat the process in 30 minutes to drop off Greta, we decided it might be best to go the hour back to my barn and unload Rio first. That all went smoothly, but by the time we made it back to Greta’s barn we were STARVING. Joanne took me to her favorite local Mexican restaurant right by her barn, where we treated ourselves to lots of queso and a few margaritas. Aka, the perfect way to end a veryyyyyy long morning! 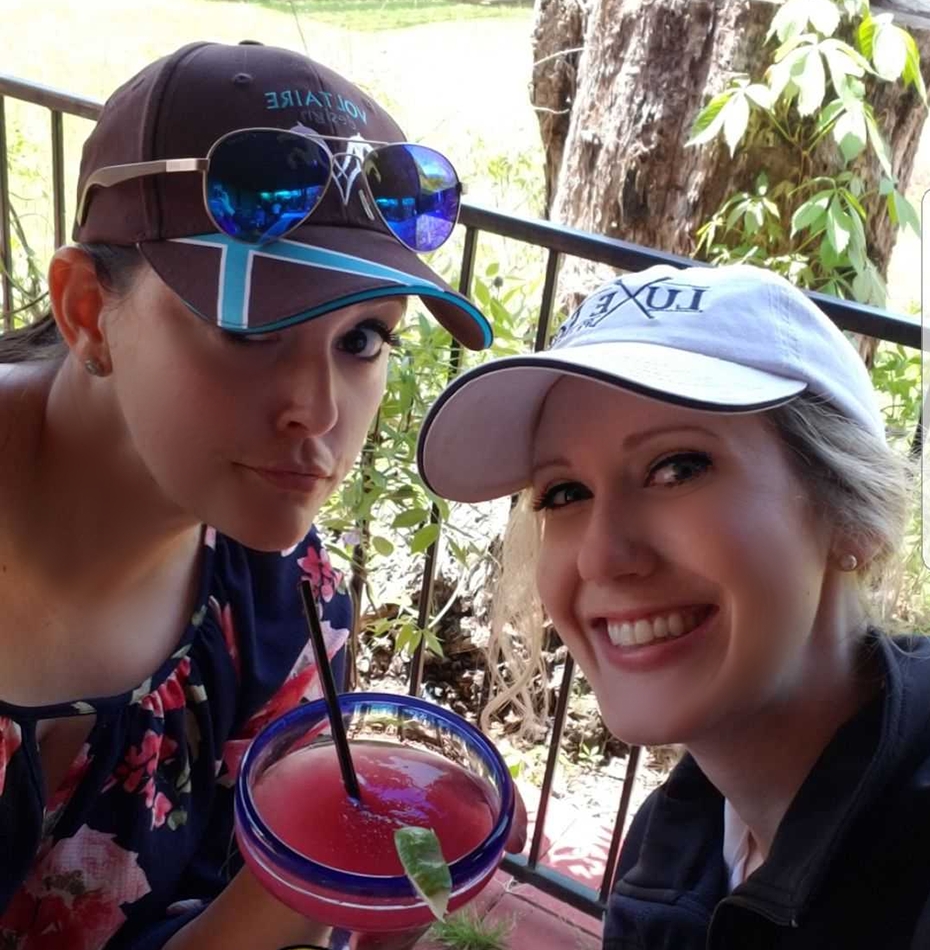 Huge thanks goes out to Pam at Red Hawk Ranch for being an amazing host, and Terri Cage and her amazing crew for putting together the whole morning! We had a blast, and cannot wait to see the finished product!