A HUGE milestone occurred this weekend- Rio’s first ever horse show! My barn and I attended the NTJHC Benefit Show this weekend at Texas Rose Horse Park, near Tyler. Originally, Trainer and I did not think that Rio was ready to attend- he’s barely been back in jump training for a couple weeks, and he is still receiving shockwave treatment and steroid injections for a small medial LH wound that is slow to heal. We did not want to risk anything happening to it that could  interfere with the healing- such as riding without a boot protecting it. I ride in the hunters, aka boots=bad, so that was a bit of a road block. Since I am actively riding him and jumping him at home, I REALLY wanted to go to the show to at least school, introduce Rio to to horse show life, and school him over the show jumps. Trainer agreed this would be very beneficial, so we decided semi last minute to bring him.

The horses rolled onto the show ground around 12:30 on Friday afternoon. I was there, excited to meet Rio (nervous mom and all) and lead him off the trailer. He was very interested in his new surroundings, but like, also totally chill too. I led him straight to his stall, where I promptly had to switch stalls with another horse due to the horse on the other side of the partition attempting to climb the wall to get to Rio- who is never one to back down from a fight. Once he was settled in stall 2.0, there were no issues and he calmed down right away and started munching his hay. Later, I took Rio on a walk around the grounds and he was so so good and not at all spooky.

Trainer had several jumpers to coach so she had me get on Rio while she rode her 4 yr old Czech import, Sagill, who is also for sale, who was also the champion in the Pre Greens out of 11 horses, and this was also his first show ever. (Seriously, if you are interested in him feel free to comment for more info). The ring was pretty crowded (as show rings tend to be the day before a show starts) but Rio was seriously CAF (chill as fuck). Did not care that horses were jumping all around him, did not care when people did not pass within a safe distance, etc. He was actually uber focused and listening to me. After Trainer had jumped her 4 yr old around (who was also CAF) she had me go over a few things (set around 2’3 to 2’6) and Rio was Fabulous! Approaching a brick wall he backed off a bit by dropping to the trot, but still jumped it, then I immediately came from the other directions and he was fine with it. I was so ecstatic to realize that I have a horse that will be able to go to horse shows and not be psycho (YAYYYY!).

In fact, Rio was so good I decided to enter him in something. Since he needs to a bell boot over his left hind still (as a precaution) my BFF clued me into the idea of doing an equitation classes, because boots are allowed. She is so smart (why didn’t I think of that?).

So I briefly check the schedule and decided to do the 2’6 Jr/Am Eq and the flat class. The flat was on Saturday and the O/F on Sunday- which was oh-so-perfect because it would allow me to to school the rest of the jumps I hadn’t gone over on Friday when the arena opened. Unfortunately, I am blonde and cannot read a schedule. Thankfully, I was clued into the fact the the Eq O/F was also on Saturday, unclear how I missed that. I tacked Rio semi-quickly, still undecided at this point if I would do the O/F. I was worried about over-facing him and having a bad experience. Trainer warmed us up and he did beautifully during the jump warm-up, so with a small nudge from Trainer I did do the O/F.

It was not terrible! In fact, it was actually good! Good being subjective, as in good for Rio who has barely been jumping again for like 2.5 wks, has never been to a show, is still super out of shape, and has a mediocre rider. Seriously, I rode him like a timid baby. I realized afterwards that I should have ridden him super confident- like we had done it a million times- and he would have fed off my strong leadership. This realization came the next day so I will try not to skip ahead. But I was SO EXCITED that it went reasonably well! Considering the ride I gave him, he was a freaking rockstar.

After the O/F we did the Eq flat class. I am unsure how many horses were in it, but certainly more then there are ribbons for. I initially was like “oh geez, all these juniors are going to kick my Adult Ammy ass but oh well, it will be a good experience for Rio, who doesn’t like to canter for more then 1/2 a lap around the ring LOL. Rio also prefers I half seat in the canter, because full seat and more collected canter are hard. We run about the normal length of the class, WTC canter including sitting trot both directions, and I am starting to get le-tired. I mentioned that Rio is out of shape… I should probably admit that so am I. I do not like to do sitting trot FOREVER. Plus Rio demands muy leg at all times. THANK GOD the announcer started calling numbers to come into the the center of the ring. God is merciful! Wait… they didn’t call my number. Is that good or bad? I’m still sitting the trot. Finally the announcer says to walk and change directions. Then more instructions ensue. CRAP. They are pairing down the class. Which is good, means we made the first cut, but like bad because I’m tired. More cuts ensue. May number is not one of them. We continue to “work off”. Rio is becoming irate. He has never cantered this much in his life. Our canters are becoming hand gallops- anything I can do to keep him going. More numbers are called. Still not mine. Yay (bc ribbon) but I AM DYING. I begin to wonder what will happen if I just walk into the middle. I am THAT tired. The potential after effect of Trainer’s wrath stops me from doing this. She has never been super angry towards me, and I don’t want to find out what it’s like. Finally, I realize it is down to me and one other rider, a junior on a lovely Czech import that Trainer sold them. I am giving exactly ZERO fucks at this point. We are sitting the trot- again. My Eq has gone to shit. Every muscle in my body is screaming. Rio is a friggin saint for carrying the sack of potatoes that is me. The judge is a sadist, I have decided. We have cantered like 20 million times. Class is finally called to an end. Junior on lovely horse rightfully wins- she deserved it. Rio and I are awarded a 2nd place ribbon for our efforts. I feel like I have never worked so hard for a ribbon. JK, but only sort of. I am THRILLED that Rio has won his first ribbon though! I am told that my sitting trot is my super power that lead to my success in this class. I credit my years of dressage training.

Due to this class being a hellish marathon, I have many pics. Thank you Lucy for photographing! 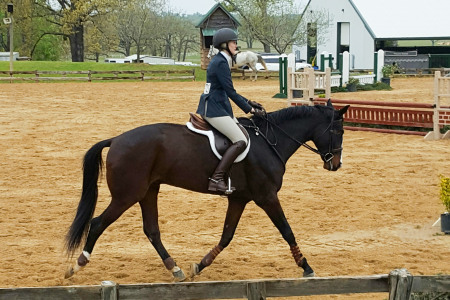 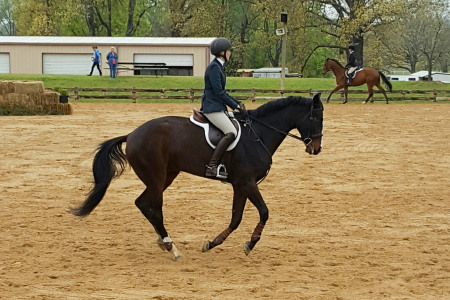 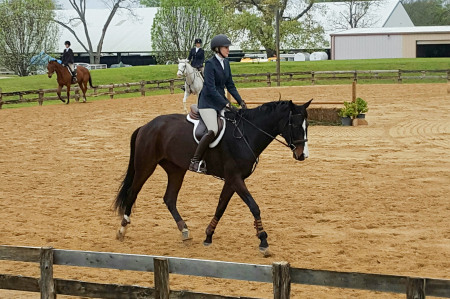 Sunday morning was the hunter derby, so there was no open schooling in the arena beforehand. After the derby, they opened the arena for an hour before proceeding with the remainder of the hunter classes for the day. I contemplated entering the normal 2’6 division for the experience, but decided that schooling post-derby would be more beneficial for Rio and I. I warmed up in the jumper ring (jumper classes were Saturday only) and was ready to jump as soon as I got into the hunter ring. Trainer was also there schooling her 4 yr old. I started to jump around as soon as I got into the ring, to simulate more of a show experience, and to try and beat the crowd. Rio was a STAR. We even did a 3 stride to 3 stride diagonal line that was in the derby round, and he hunted down the line like a seasoned show horse. He still want to get a little low and on the forehand before the jumps, but I think I did a good job of sitting up,  keeping a feel, and putting my leg on to the base of the jumps. We jumped every jump in the ring, and he didn’t hesitate at a single one. My little champion!

I actually RODE during our schooling session, versus the sit pretty and freeze that I sometimes revert back to in actual classes. Rio responded by bravely tackling every jump, and he felt WAY more grown-up then he ever has before. He was impressed by some of the oxers and put in some really lovely feeling jumping efforts. I think he really responded to my much more confident riding, as opposed to the semi timid ride I gave him Saturday.

I am over the moon excited about how well he did all weekend. I want to pinch myself. I have a sound, healthy, happy, sane horse that seems like he is really going to flourish as a show horse. I seriously cannot believe my luck!

THANK YOU times a million to Trainer, and our awesome barn family for supporting me and making the show a success!