Rio is keeping all of us on our toes this week. The week before our first show in ages can’t go smoothly, of course that’d be too easy! I swear I’m not complaining though, I really am thankful. 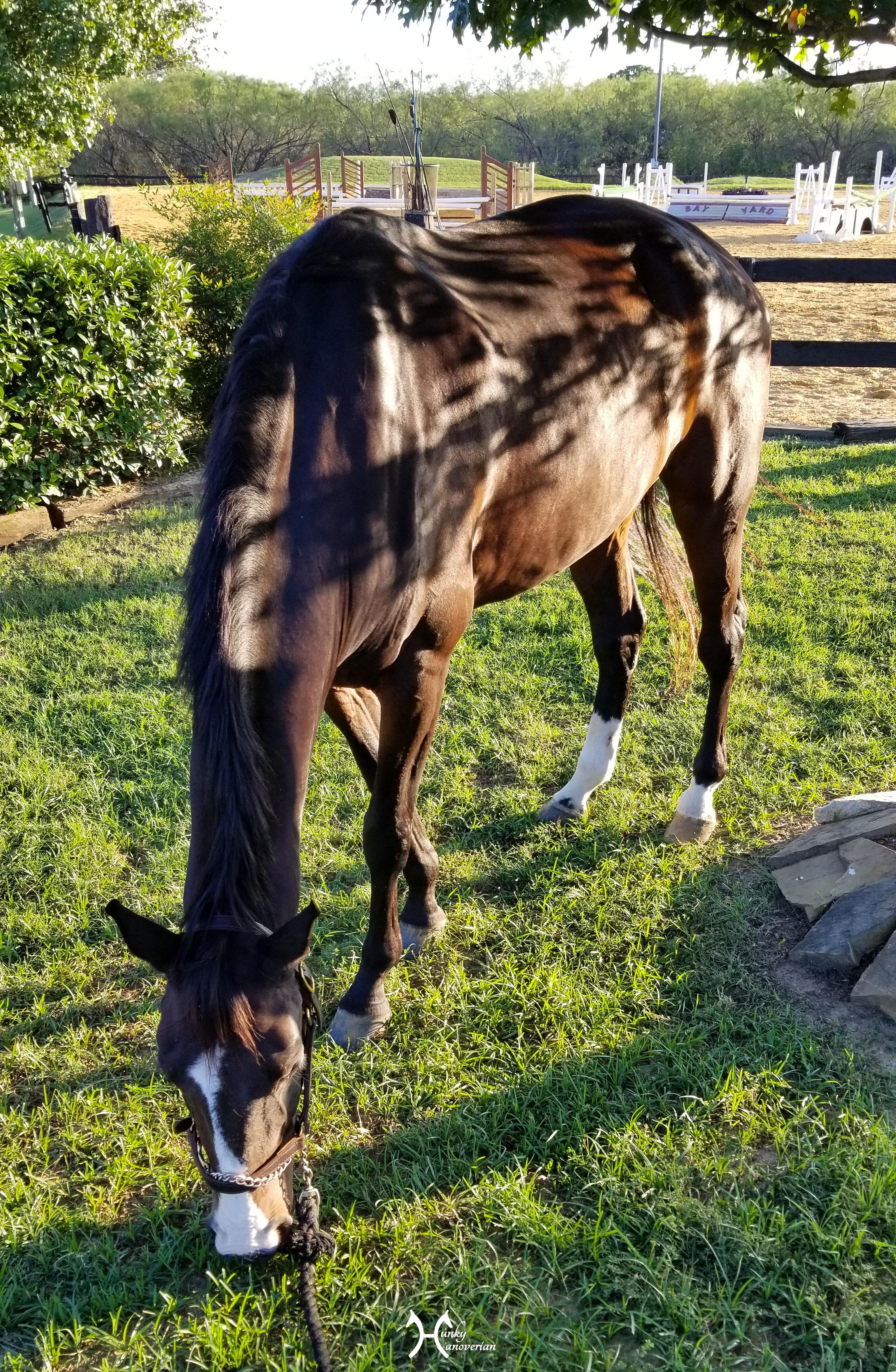 I hacked Rio on Tuesday like I usually do. The horses at Bay Yard get Mondays off, so our Tuesday hack is usually pretty relaxed. We do lots of stretching and long trotting, and not too much canter. This Tuesday’s hack was no different, and I kept it to about 25 minutes. I brought Rio in for a shower, and we hung out in the outside wash rack for bit enjoying the cool breeze. I did my usual routine of putting conditioning spray onhis mane and tail, hunting for any areas where crud might be trying to develop and spraying them with Banixx, and putting DermaGel on his old spider bite wound (which has never closed fully) and his distal medial left hind (which he re-opened during his bid for freedom from his stall when he fell on the asphalt). I gave him the rest of the carrots I had brought, coated him with fly spray, and turned him out in his paddock with his donk friends for the night. As I was pulling out, my gaze found him one last time happily grazing in the large field, settled in for a good night.

Fast forward to the next day, Wednesday morning. I’m at work, which is proving to be a stressful day and it’s only 8:30. I check my phone in-between patients and see a missed call from one of my trainers. I immediately think “SHIT.” Trainers only every CALL on a weekday morning when they know I’m at work if something is wrong. I swear I have PTSD from trainers calling me. I call back immediately and sure enough, Rio is colicing and the vet is on his way. The head groom found him laying down in his pasture that morning, and he was obviously uncomfortable in his stall and wouldn’t eat his breakfast. Trainer said vet would call me as soon as he was done.

The vet called about an hour later after doing his thing, and said that all is good for the time being. Believed to be some mild gas colic, he said that as long as his symptoms didn’t reappear once the drugs wore off he should be fine. I was very relieved, but also on edge for the rest of the day, wondering if he would start to show signs on distress again. Although an impaction wasn’t initially found, we all know that that doesn’t mean they are 100% in the clear. If it was serious, his symptoms would reappear after the pain masking drugs wore off. Trainer kept me updated with texts, and when I left work I knew that he was resting comfortably in his stall and had been drinking water.  I got there about an hour and half later (traffic is killer that time of day), to see this:

I was relieved to see that he was 100% normal. I got the OK to take him out to graze, and he ate ravenously for 20 minutes or so before I brought him in for a thorough grooming and massage. He always drinking water after grazing, so we took a pit stop at his stall for him to take a few long gulps. I felt very relieved that the trouble seemed to be in the rear view at this point. He was allowed a small amount of his feed for a late dinner, and normal overnight turnout with frequent night checks by the guys.

All was well during the night and yesterday. He got a very light hack by Trainer Julie, and she said he felt better then ever. I went out again last night to watch lessons and to pamper Ri more. Not exactly how I thought this week would go (and nothing like dropping more more on vet bills right before a horse show), but I am still super thankful that we seem to have escaped what could have been a much worse outcome. The plan is to lesson like normal this weekend, and still go to the show next week, assuming everything with Rio stays 100% normal.

Sometimes I laugh at my effort to plan though. We all know how well that works with horses!!!

Rio Progress Update: In the homestretch