Emily at May as Well Event had a marvelous idea for a blog post- share one picture from each year of the past decade. How fun is that?! Here is my 2010 decade recap: 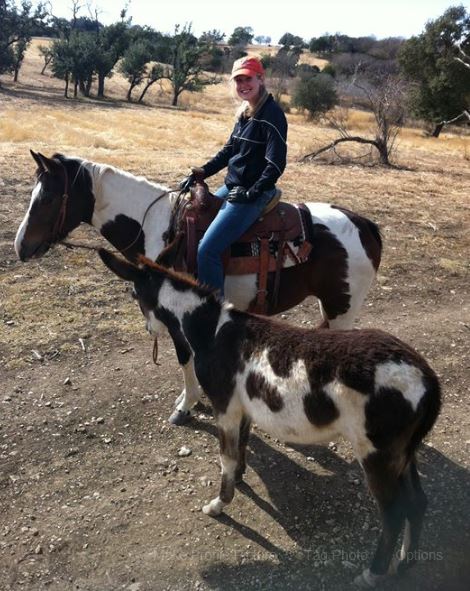 Wow ok, 2010 was a tough one to start on for me. It wasn’t a super horsey year for me (last year of college), and the horse stuff I did do wasn’t well documented or the photos are now lost. Found this one though! This is Millie and I, riding at a good friend’s ranch south of Waco. Funny enough, he is married with a big family now and they are currently building their dream house on this property. Millie is still there (I asked about her every now and then). She was young back then, maybe 4 or 5, so she isn’t too old these days. I keep saying I’m going to come back and ride her again, maybe 2020 is when I make good on that!

(Yes, I know I was super dumb riding without a helmet. I don’t do it anymore.) 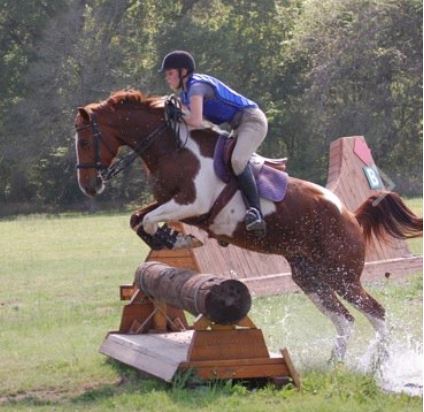 In 2011 I had just graduated Baylor but stuck around Waco to finish out the lease on the house I was living in. I had “gone pro” a couple years earlier so I could make money teaching and riding. It wasn’t something I ever expected to do, but I loved it. I mostly taught at a local riding academy and had a few dressage clients and a couple of horses. This was Lola, a sweet little mare who I had never jumped before and who had never gone XC, but took XC schooling this one time on a lark. She was a total blast and I still think she would have made a great low level event horse. 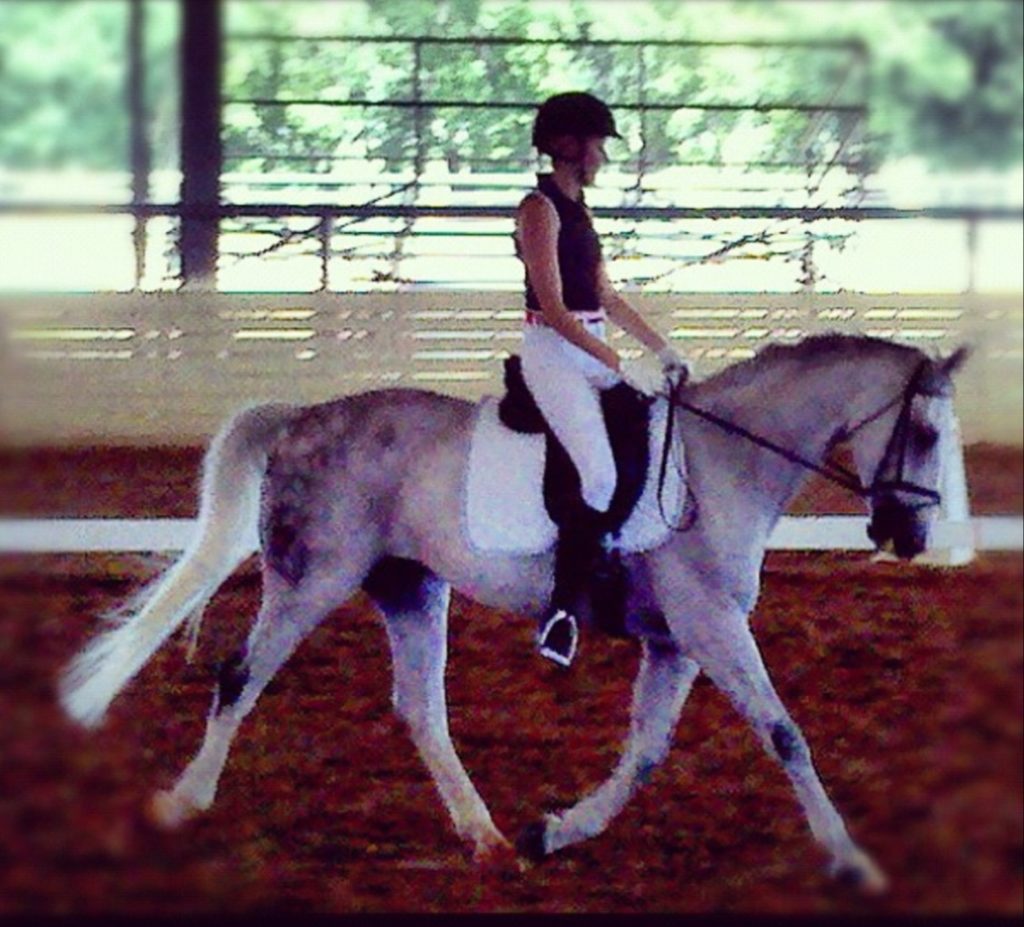 By the time 2012 rolled around I was living in Dallas, working at a barn there, and doing my ultrasound program. I spent most of my time teaching up-down lessons, but some of the resident trainers with their own programs would let me ride their horses on occasion. I took this guy to a schooling dressage show. He had never shown dressage before but we pulled a 71.7% in our 1st 3 test. I would end up leasing this horse for about a year in 2014. I had also just started dating my husband, I remember he came to this show and sat in the stands with my mom. This was probably not the best introduction to horse showing for him, as he still talks about how boring dressage is. Yes, I am wearing a sleeveless shirt. Yes, it was middle of June in Texas. Yes, I still regret that decision. 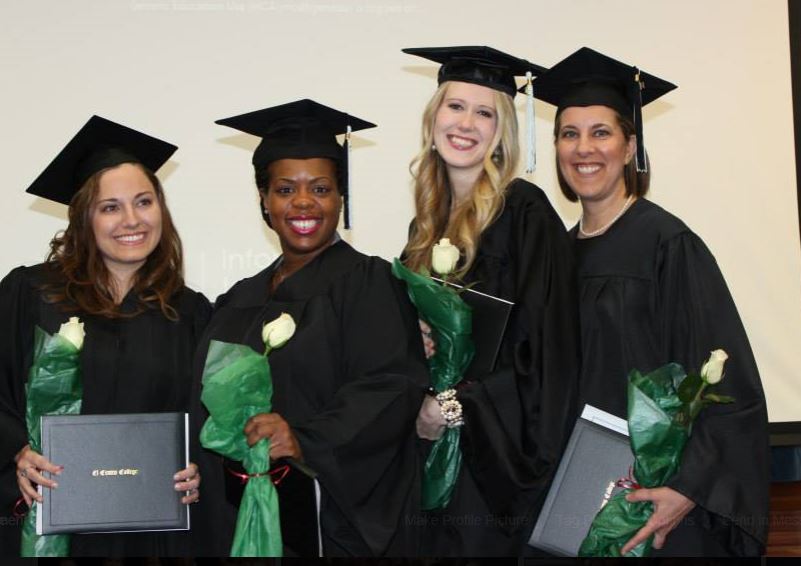 I couldn’t find a single horse photo from 2013. I was still working at the same Dallas barn, and going to school full time. As far as I remember I wasn’t doing too much horse-wise. I couldn’t afford any type of lease situation, so most of my saddle time consisted of schooling the lesson horses. I graduated my ultrasound program in December 2013 though, which was a big deal since it allowed me to get my first sono job the following year, which finally allowed me enough money to get back into horses more seriously. I was also able to stop teaching lesson at that time so I could begin the 1 year period required by USEF to get my amateur status back. 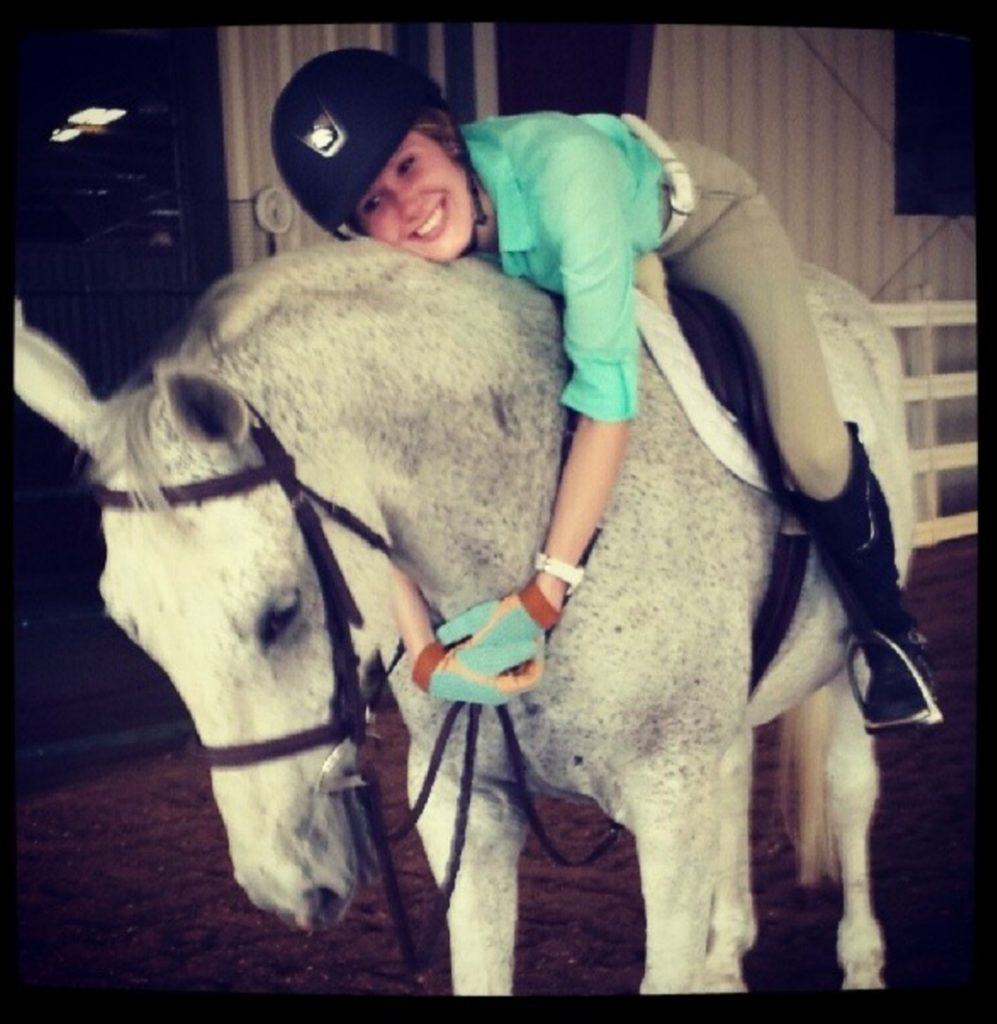 This handsome grey came back into my life in 2014. This was still before I did much on social media so I only have two pics of me on him. I wish so badly I had video or more pictures of us. Once I started my “big girl job” in March of 2014 I started to half lease him. I also started taking lessons from my former employer, a h/j trainer. These were some of the first lessons I took after a several years of kind of doing my own thing. Late fall of the same year I went to my first A h/j show and showed in the .85s and .95 jumpers. I was still technically a pro with USEF, but the classes were open so it didn’t matter. Unfortunately we had a terrible time, with me coming off twice on the 2nd day, the 2nd time was bad enough to warrant a trip to the ER just to check out that my neck was ok (it was, thankfully). This ended our partnership, which was tumultuous the whole year if I am being honest, and really really did a number on my confidence. I wasn’t sure I really wanted to ever jump again.

2015 was a game changer of a year for me in the horse department. A good friend of mine had an absolutely stunning hanoverian with years of showing experience. He was even shown a few times by Jimmy Torano. For the first time ever as an adult I  got to experience being an ammy 100% of the time, and being apart of a show program. It felt really good!  More importantly, this horse saved my confidence as a rider. Our first show of the year was at a schooling show in the 2’3 (and I was TERRIFIED) and we finished out the season getting good ribbons in the 3′ Adult Amateurs at A shows. This was really my first time doing hunters seriously, and the first time I got to jump around on such a lovely and experienced horse. I knew I was hooked, and destined to continue my horsey journey in hunter land.

An even bigger year then 2015, in the summer of 2016 I bought Rio. My first horse “as an adult”, this was a pivotal moment for me. Thank goodness my husband fell for the “horses aren’t that expensive” pitch. A gangly 5 yr old with no jump experience, I was happier then I had possibly ever been. He was a saint from day once, and never did anything naughty or dangerous. Jumped anything we put in front of him like he had been doing it his whole life. He had the biggest gaits that needed a ton of balancing, but he was (and obvi still is) just the best boy ever.

Ok, ok. I cheated for 2017. You get 2 pictures, because 2017 was a complex year. After our first show together, a schooling h/j show where we did an under saddle class, and another small schooling show where we jumped around 2’6 for the first time, Rio got bit by a spider. It was horrific. Then, when it was finally mostly healed and we were back to working, he broke the splint bone in the same leg and required surgery. With about 5 months of the year spent rehabbing, we finally made it to our first ever A show together, as well as our first time in the 3 ft, in December. It was an emotionally trying year, but it was all worth it. Rio and I really bonded through his various rehab stents, and I think it is the reason we finished so strong despite the really inconsistent training. 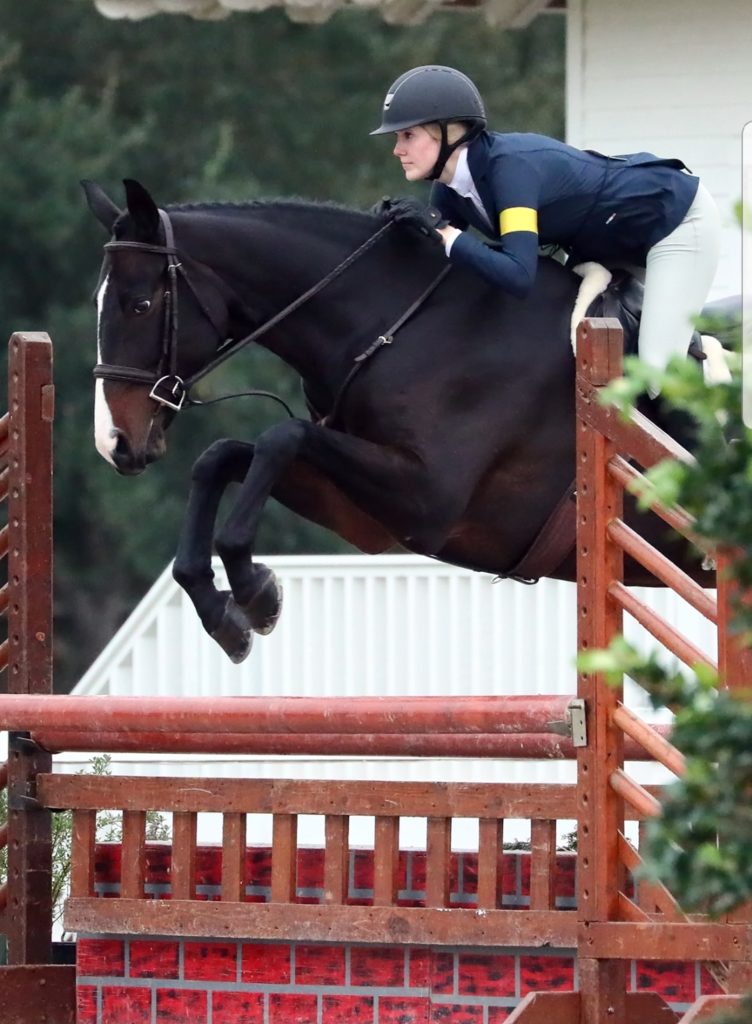 2018 was the year of the horse shows. We had our first “season” together, doing 6 shows throughout the year. It was a HUGE learning curve for both of us, but Rio was always game to try anything (he has still to this day never refused a fence in the ring with me, no matter how terrible the distance was or how scary the jump). Sometimes I still watch the videos from that year- the progress in such a short amount of time is easily visible. Other then one month off (after he escaped his stall and fell down), we actually spent all of 2018 training and showing, which was a big change from the previous year. I am still busting at the seams with pride when I think about all we accomplished together in 2018. 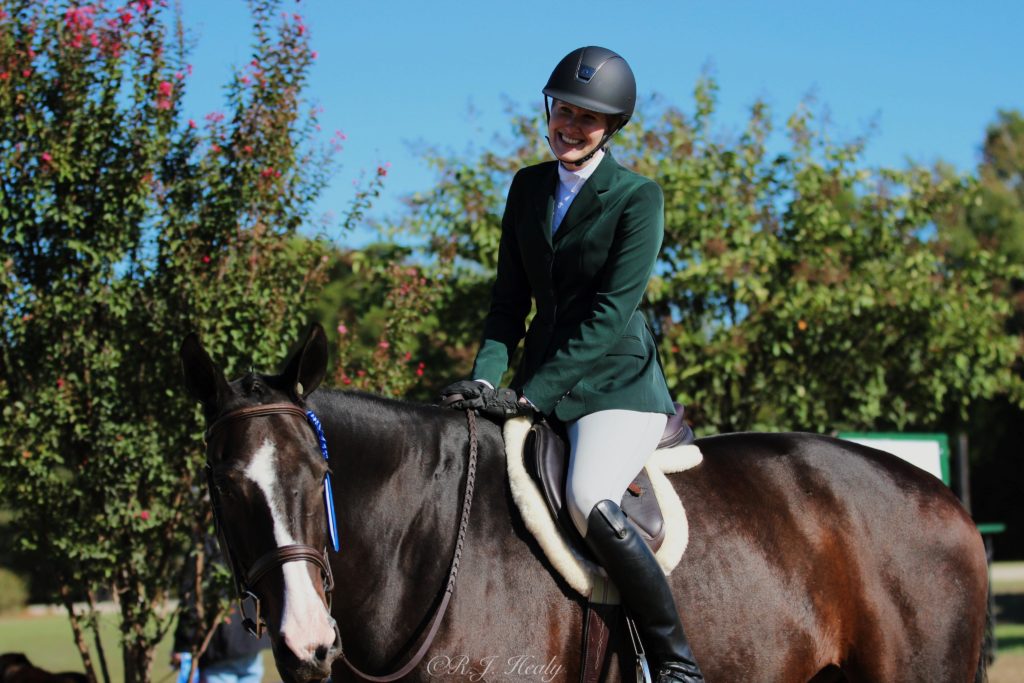 Yes, this is a show photo, but one with different significance. For starters, it was our first blue ribbon together over fences. It the best round we have ridden together to date, and I couldn’t have been more pleased. It also might be  our last show photo together. By the closing of 2019 I found out that Rio has suspensory issues in the hind. I know, I know, lots of horses rehab from suspensory injuries. I also know the prognosis given to me isn’t great, and if he rehabs decently to become rideable again I am not sure I will ever take the risk of causing re-injury by going back into the show ring.  I am not saying NEVER, but I am also trying to be realistic. 2019 is ending in uncertainty, but that isn’t new territory for us, and we will see what 2020 brings. Overall, I’d say this was one heck of a decade and I am beyond excited to see what horsey adventures the next ones brings.

DIY: Tackroom on a Budget