Writing blog posts is getting increasingly hard y’all. I just don’t know what to say about Rio while he rehabs. Since the weather has been cold and wet I haven’t really had the opportunity to see him during the week (it’s dark by the time I get off work and drive 45 minutes to my parents’ house.) That means that right now I am only seeing him on the weekends. I miss him so much during the week, I’m not used to going so long in between visits. Before his injury I was riding 2 week nights a week and both weekend days. When I do get to see him though, we have started to develop a new routine.

On Sunday when I headed out to the pasture to catch him he was in our neighbor’s pasture. Their property is next to ours and has tons of nice grass. They graciously allow our little herd over there to mow for them, and the horses find it to be quite the treat. My mom tells me that when the gate is closed between the pastures Rio will stand at it gazing into the other side, making it very obvious he would like in. I guess sometimes the grass really is greener on the other side HAH.

Anyway, he was over there and I wasn’t sure he’d want to be caught by me. He totally surprised me by not only coming towards me once I was spotted, he actually CANTERED in my direction. God, I love that horse. I keep telling myself it’s because he loves me and not because I throw treats at him non-stop during my visits.

Once caught, he receives a thorough grooming. It’s funny how some products that work well at a full care barn with a nice facility don’t seem to quite fit the bill once you don’t have access to all the same amenities. I used to LOVE diaper cream for scratches/cannon bone crud for example. The bad thing about it is, you need to wash it off thoroughly and reapply often, otherwise it turns into this grey grimey gross mess. Since I don’t have hot water at my parents (or really even any kind of wash stall), and I’m not going out as often I realized that I’d need to find another solution to help with leg crud. I have a skin rescue salve (Zephyr’s) that I like for areas of skin loss due to crud. It doesn’t get too gross if not washed off, but it really isn’t formulated to help prevent/cure it. 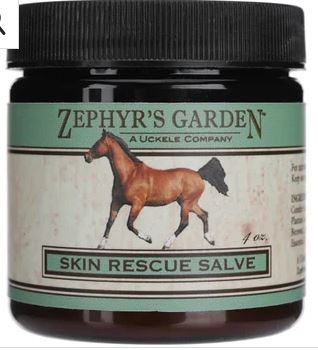 I have decided to order that Coat Defense power to try to combat the leg crud. Rio doesn’t have it bad, but what he has is stubborn and I’m worried it will get worse if I am only able to treat it once a week. Plus, the Coat Defense powder seems easy enough to apply so I might be able to convince my mom to apply some during the week. Fingers crossed it works well!

I have also had to get some Keratex, which is a product I previously didn’t have a need for. Rio has always had shoes since I’ve owned him, and has never has any issue with losing them early or any kind of cracking. Now that he doesn’t have shoes though I have noticed they chip much more easily. Keratex is a bit hard to use if you don’t have a clean hard surface though. I can tie Rio to the fence in my parents’ backyard and use the hose to clean off his feet, but I don’t have a concrete surface to do it on. That means that even freshly cleaned hooves ares till going to get grass and leaves and such on them as I’m trying to apply the Keratex. Since it’s a really think liquid I have to re-dip the brush often which means my bottle is now full of dirt and debris lol. This would never have been a problem at my old barn where we had concrete wash stalls with mats.

Although it may sound like I’m complaining, I swear I’m not. It’s just an adjustment to figuring how to do things differently. After all, this is the property I grew-up at. I never boarded a horse until I was an adult, so I know first hand but my parents’ set-up is perfectly usable. Also, everything about their place is much more suitable to Rio’s needs right now, so I definitely don’t mind making some adjustments due to available amenities. Thankfully, Rio is super chill and well behaved so I don’t need crossties or a fancy set-up to do what I need with him. He had a PEMF session on Sunday and he was really well behaved just being loosely tied to a somewhat rickety fence.

Anyone else do PEMF? What do you think of it? The PEMF lady recommends 1x/week if you are treating something (like Rio’s suspensory in his case). Problem is, I plan om him having a year off. I can’t treat him every week for a year. Would it make more sense to do 1x/wk upfront and then space them out? I honestly just can’t decide if I want to spend the money on multiple treatments when I am not sure if it is even helping. Would love to hear other people’s opinions on this topic!

Once Rio is thoroughly grooming I usually take him for a walk. If I want to keep it short I walk him around the neighborhood, and for longer walks I can head down the trail connected to the end of the street. Rio seems to really enjoy the change in scenery, as well as the occasionally breaks to graze on the best looking grassy areas (the clover looking stuff is his favorite as well as the plants with the little purple flowers). Just googled it, apparently it’s called ‘henbit’.

That’s pretty much the routine at the moment. I think it would be fun to train him to do some tricks, but not anything that would potentially turn into a bad habit. I already give him gobs of treats, I would love to be using them as a training tool instead of teaching him to be more and more demanding. Anyone have any good website or youtube channels they could recommend?

I’m going to lesson this weekend at my old barn, so I will try to get some media to share next week. Have a great weekend!