Great news! Rio is doing very well. Amazing Vet started him on a different antibiotic on Wednesday (SMZ) and he is doing very well on it. Eating his hay and grain normally, and very happily getting a few hours of turnout in a very grassy paddock in the mornings.  He is still getting his ulcer paste every day, and the probiotics in his feed to help keep his tummy happy, and it seems to be working. In fact, I think he is putting some weight on and starting the sport the #hunterchunk again! His spider bite of death is actually getting smaller too! I’ll put that pic at the very bottom of the post for those who are a bit squeamish, as it is still kinda gnarly looking.

Trainer went out of town this week for a beach wedding, so no lessons to report on. I did get to hack Cascai a couple of time while she was gone though and he was amazing per usual. This horse is going to be a junior/ammy’s dream someday! I love riding him because he has a great dressage foundation and I get to dust the cobwebs off my more advanced dressage training and actually get to apply some of it. Nice to know that the knowledge is still somewhat there, rattling around in my brain somewhere. I keep telling Trainer that if he doesn’t make it as a jumper I’d happily steal him for a dressage career.

Wednesday night after riding Cascai and doting on Rio I *may* have forgotten to bungee the latch on his stall. We recently started doing that when Trainer found him on the front lawn one morning. Well…. Thursday morning Rio was not in his stall, and no where to be seen.

M (barnworker) hopped on the golf cart and started looking for him. He was all the way down by the back pasture. Rio’s new nickname is Houdini. Thankfully, he was certainly no worse for the wear and is probably quite proud of himself.

After riding Cascai on Saturday, I spent a few hours spoiling Rio. He got a good long curry followed by a bath. I took off his bandage and hand grazed him around the farm to let it air dry. Aka he took me for a walk (not kidding, he really did take the lead and tell me exactly where he wanted to go haha). Basically heading straight for the back pasture. I guess that’s where the best grass is!

Being the social butterfly that he is, we stopped by several paddocks during our walk/graze sesh to say hi to his buddies.

What can I say? I am so thrilled that Rio seems 100% his normal self, and his leg is definitely getting better. I hate to jinx it, but I really feel like we are over the hump with this whole spider bite thing! His leg finally seems to be on the mend, and we are on a medication regimen that isn’t causing secondary side effects. I’m hoping in another week it will be healed enough that he can resume normal turnout, and even be ready for light riding in 2-3 more weeks. Keep those fingers crossed, and good vibes coming our way!

And one more handsome Rio pic for the road! 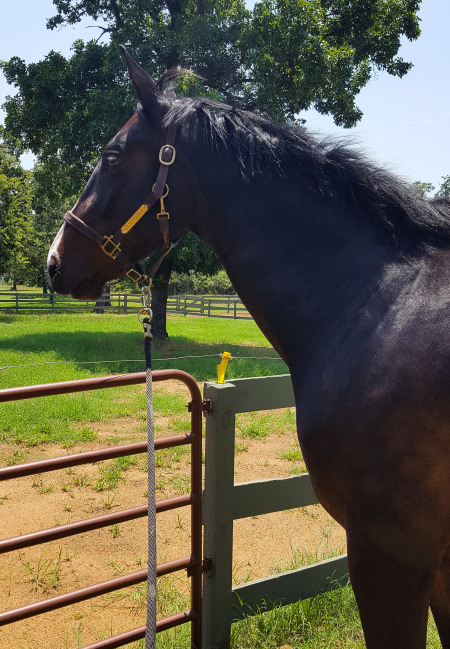