Rio’s real rehab has officially begun and I couldn’t be more excited. He has officially been turned out since his suspensory injury was diagnosed 11/2019. Well, he actually spent the first month on stall rest, followed by another month of stall rest with hand walking, and then got turned out at my parents’ property where he is on 24/7 turnout. 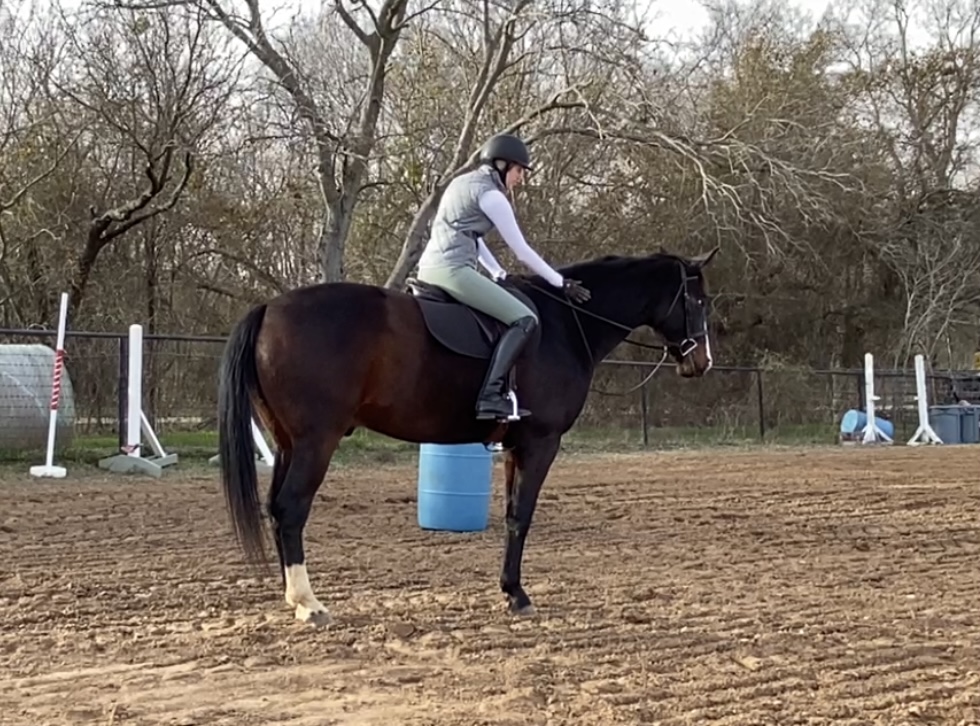 He had a follow-up ultrasound and hock injections in April 2020, which is when I was given the OK to walk under saddle. We lightly trail rode for a few months in the summer, until it got too hot in July and August. Once the heat let up, I decided to try to start some arena work, where I was hoping to incorporate some light trotting. Unfortunately, after trying it out a couple of time, I could tell he just didn’t feel quite right. A thorough work-up later and my vet wanted me to treat for ulcers (mostly just to cover our bases due to what seemed like a change in attitude on his part), and recommended we treat for EPM too. Opossums are very prevalent in our area and my mom has seen some in our barn. We did both, and at that point I decided it was an omen that he wasn’t ready to return to work, and decided to give him the winter off as well.

Around this time, my trainer set me up with the lease on Loopy, so I was able to concentrate my riding energy on her, and just groom Rio and shower him with treats. Of course three weeks into that lease, I broke my foot when I was grooming Rio. Apparently we both wanted to take the winter off. Now that I’m on the mend, I’ve been taking a pulse on how Rio is feeling. My mom lightly lunged him for me one afternoon, and he looked pretty good.

Not wanting to be the first one back on him with a still mending foot, my friend Sadie took the reins for a casual trail ride last weekend. He was a perfect angel. Feeling bolstered by Sadie’s success, I decided I was well enough to ride him myself this Saturday. My foot felt a bit clunky and my ankle stiff, but Rio was game for what I can only assume he interpreted as a pony ride. In fact, when I wouldn’t let him visit with the horses outside the ring, he did his best pony impression by planting his feet and not wanting to walk on. I think SOMEONE has gotten reallllll spoiled as a pasture puff.

After walking for about 15 minute I finally felt secure enough to trot a little. This past fall, he would get a little pissy when we trotted, which was an obvious sign to me there was still something NQR, so I was anxious to see how he felt while trotting now. I didn’t do much at all, but he trotted off easily and happily, so I felt like it was a really good start. He felt like my happy Rio with the great trot he has always had, I was reasonably optimistic at this point.

Wanting a little guidance and someone else’s opinion, I asked my friend MM (who is also Rio’s former trainer) if she’d be willing to come sit on him Sunday. She knows his whole history and all about his injury, and I told her I was anxious to see what she thought. She gave him a quick light hack for me, and we are both very happy with the results. He went right to work for her, and didn’t put a hoof wrong. He looked fairly even throughout the ride, and seemed eager and happy to work. She tested the canter a little bit after some solid trot work, and was impressed by how balanced he was, especially considering he hasn’t been cantered under saddle in about 15 months.

Yes, he has draw reins on in the video. No, he usually never goes in draw reins (I don’t even own any). I did ask her to put them on due to the fact that he had been getting a bit light on his front end when I’d try to trail ride him and he saw something scary. Since I was putting someone else on my horse and asking her to work him, I wanted her to have all the tools she might need. They were completely unnecessary though, and he will not be using them going forward.

Now that I know he feels good and wants to work, I will begin to actively build his strength back up. He’s already in corrective shoeing (for about 4 months now, he had been barefoot most of his time off), and I just made an appointment to get an exam, and have his hocks and stifles injected on Saturday. I want to make sure to do everything possible to make sure he’s feeling his best before I put him back into actual work. Best part IMO, we have no timeline. I can take it slow and really listen to how he feels every ride. If we have an off day, there is no pressure to work. I only want to work if he feels good.

So what’s my goal? I hate speaking goals that revolve around horses out loud, as I’ve found that it seems to be a surefire way to make them not happen. But, I can tell you my goal is NOT to get him back into the 3′ adult ring. Could he maybe do it again? Yes. Is the chance of suspensory re-injury at some point pretty high if we do that? Yes. I want him to return to work at a level his body can sustain long term. The vet opinion is that he could be a 2’6 and under horse in  light-moderate work. Good news is, he is a chill guy, and usually the same horse if you ride one day a week versus 6 days. I can easily see him being ridden lightly 3-4 times a week and jumping small courses, and I think he would absolutely love that.

Long story short, I am very hopeful for his recovery for the first time in a long time. I’m crossing my fingers and toes for a smooth transition back into work.