Hey guys! This past month is the longest break I’ve even taken from the blog since I started blogging almost 3 years ago. Between traveling and life in general, I needed a bit of time away. I am now re-energized though and excited to  hit the key board again!

The week before I left for my trip (2 weeks in Croatia and Budapest- highly recommend btw!) I was having my last lesson on Rio before leaving and about 5 minutes into our warm-up he pulled up lame. Super lame. Out of the blue. Although he was much better the next day (Sunday) when I  lunged him, and almost 100% on Tuesday (according to my trainer) when she rode him, he was worse again on Wednesday. That is not what I wanted to hear 4 days before leaving the country. I made the decision to take him to an equine hospital where they would have all the tools necessary to figure out what was going on. A Thursday morning appointment turned into a leaving him over night (taking 2 sick days from work before being gone for 2 weeks in incredibly stress inducing, just fyi).

Long story short, we did lots of testing and some basic maintenance but he otherwise seems right as rain. No idea what caused the acute onset lameness in our lesson. I was of course very relieved, but on the other hand not thrilled about a large vet bill landing in my lap right before an expensive vacay! Thank goodness my barn provides excellent care and I didn’t have to worry about him while I was away. He ended up getting some excellent training rides during my absence (no soundness issues!) and I have had a handful of lessons since I’ve been back.

Here is the thing though- my lessons have been kind of rough. I had an easy-ish group lesson when I first got back which went fine, then a private lesson during the week that was definitely just blah, and a rough group lesson this past weekend where I legit missed hardcore to 2 different jumps. I can’t even remember the last time I missed so badly- it’s been several months at least.

My trainer talked to me after and said that it seemed like I felt like I was off my game since I am not used to missing distances, and that I was being too hard on myself which only made it impossible to recover. This is probably true, because I was feeling pretty down on my performance. Rio is such a saint- he does NOT care if I miss, but the mind freeze to a bad distance is something I thought I was kind of over. I previously felt like I had gotten to the point of at least making the best of a bad distance by doing SOMETHING, but not so much during Sunday’s lesson. 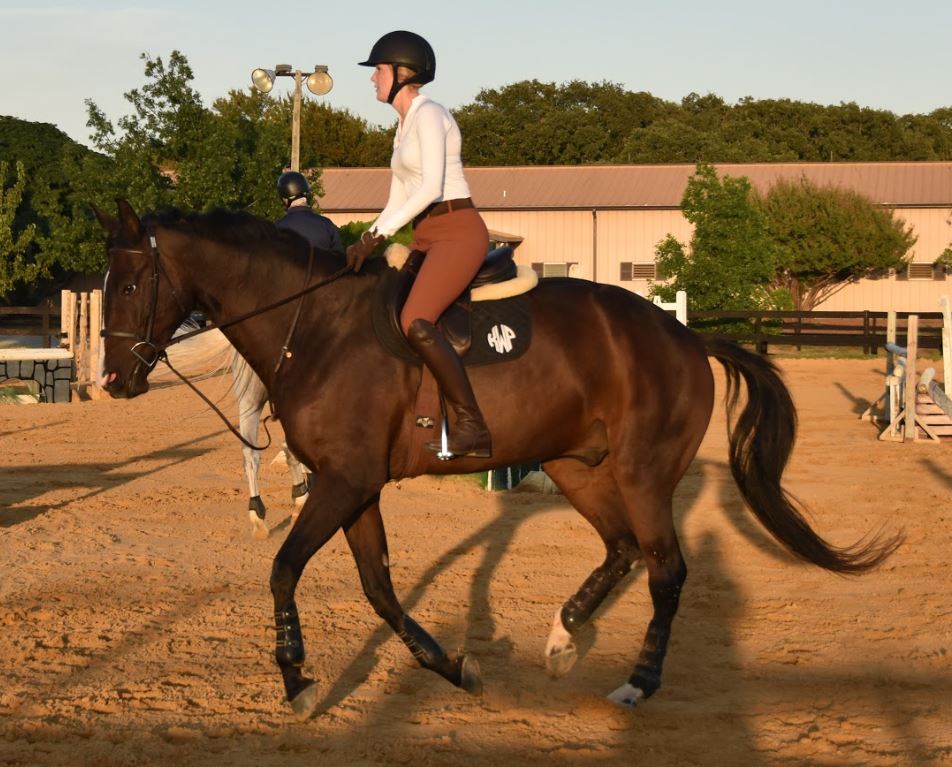 I have 2 more lessons before my first show in ages, and I know that I need to get my head in the game. Not a “I can’t make any mistakes because I have a show coming up” mind frame, but more of a “I need to be able to make decisions on course no matter what happens”. We have has SUCH good rides and lessons all spring and summer- figures that I would wait until 2 weeks before a show to be totally and completely out of the zone on course.

But what can you do? I’m going to attempt to chill the fuck out this week and just RIDE. When my trainer reminds me to “feel every foot fall” it helps me relax and focus on what is actually happening. I think I need to be more focused on what Rio is giving e on course every step of the way and less concerned about “OMFG THERE IS A JUMP!”. I was probably much more relaxed when I was having all those good rides since I didn’t have a show deadline looming on the horizon.

Someone please remind me why I horse show again?