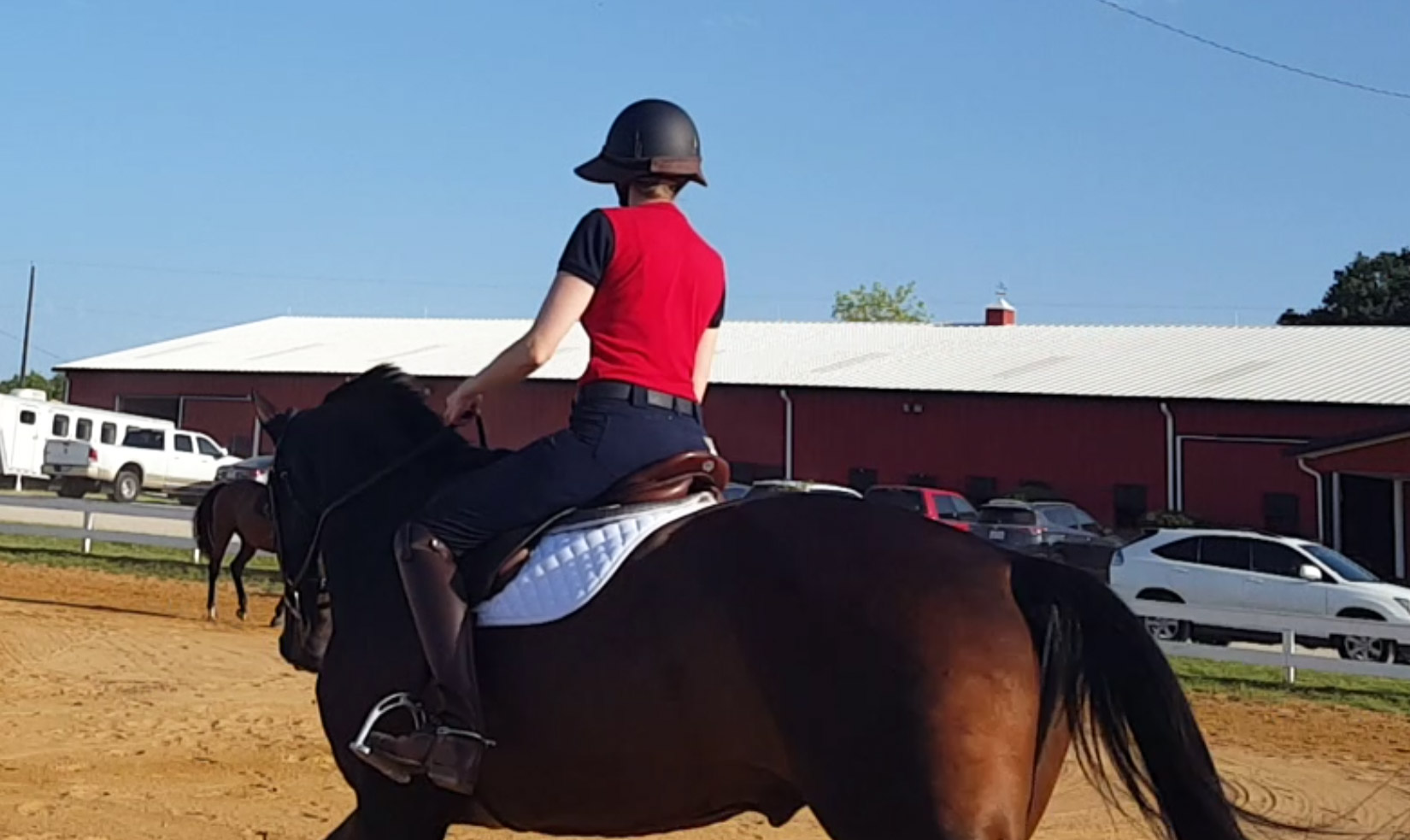 Rio and I had our first lesson back last night since the spider bite incident. It has been something like 10 weeks since we had a lesson, hard to believe.
The lesson went really well! We eased into it and didn’t work on anything too difficult, but instead focused on the quality of the work. After warming up, we starting adding 15 m circles in the corners during our trot work to encourage Rio sit back and push a bit more. On the long sides we incorporated little bit of counter bend to focus on keeping him straight in the shoulders, as he has a tendency to want to bulge out of my outside rein. I noticed an immediate improvement in his trot work after making those few adjustments.
His canter work was the best it has been since coming back into work. Up until this point, we have been able to get fairly decent quality canter on a large 40 m circle, but every time we go down one of the long sides he reverts to falling on the forehand and running in the canter. When I would try to encourage him to lift with his front end and sit back on his butt and maintain a more uphill, collected canter, he would often break to the trot rather then sit down. Although frustrating, canter work has always been hard for him, and I knew it was just a matter of strength. At this point, I was very pleased to get in a full canter lap (with 4- m circles at each end) and have all of it be passably decent quality, even on the long sides. It sure is nice to feel progress! I can’t wait until his cancer is back to where it was before the injury.
After a short break we started incorporating canter  poles, which have never been particularly easy for us, even pre-injury. Rio just doesn’t really respect them or see them as a reason to back off, he would much rather just plow through them. After several attempts, and me finally sitting down and keeping my shoulders back  we were able to get a nice trip through the poles. Definitely something I’m going to need to start incorporating more in my own rides though; I forgot what a weakness canter poles are for us.

There was a cross rail bounce set up already that we popped through twice at the end of the lesson- so exciting to finally be jumping again! It was certainly nothing spectacular, but you have to start somewhere right?
On the downside, trainer did ask when Rio last had his hocks done. I was hoping that the occasional strange/hitchy step was in my head, as my bank account will shrivel up and die at the thought of hock injections on top of all the other vet bills we have accumulated. Unfortunately, it has been almost 8 months since his last injections, which we usually do every 6. I definitely plan to get them done in August as we amp up our jumping work and prepare for fall shows. Not sure how I’m going to break that one to the hubby though haha. I keep promising him that the bills are going to get better, but we all know that’s a lie horse owners tell themselves. If it’s not one thing, it’s always another. If it’s not mandatory expenses, it’s optional ones such as fancier tack and clothes and show entry fees.

*Pics are from schooling this morning, vid is from lesson last night.

Rio Gets Back to Work