I have written this post no less then three times. I’m so in my head, and things change so quickly that I keep having to rewrite it. So here we go, the most current version!

Whooo boy! Ok I haven’t done well with chronicling our rehab journey. A little recap- it’s been tough. Every ride feels a bit unsure and at times, emotionally charged. I feel like I’m either flying high, or super discouraged. Lately though, things have been trending toward flying high after our rides, and I hope that trend continues!

With Rio at my parents’ home and no access to reliable footing (arena or otherwise) our rides are sporadic at best. Can you really expect a horse’s temperament to be as calm as it used to be when it was being ridden 5-6 days a week versus after 18 months of turnout and then only being ridden at best 3 times a week, and some of those rides are predominantly walk only trail rides? No, you can’t. But I still find myself second guessing his every misbehavior. Is it because he’s in pain? Am I missing something? Since we haven’t been able to return to our old “normal”, which consisted of mainly arena rides, it’s really hard for me to compare how he is doing now versus how he was pre-time off. 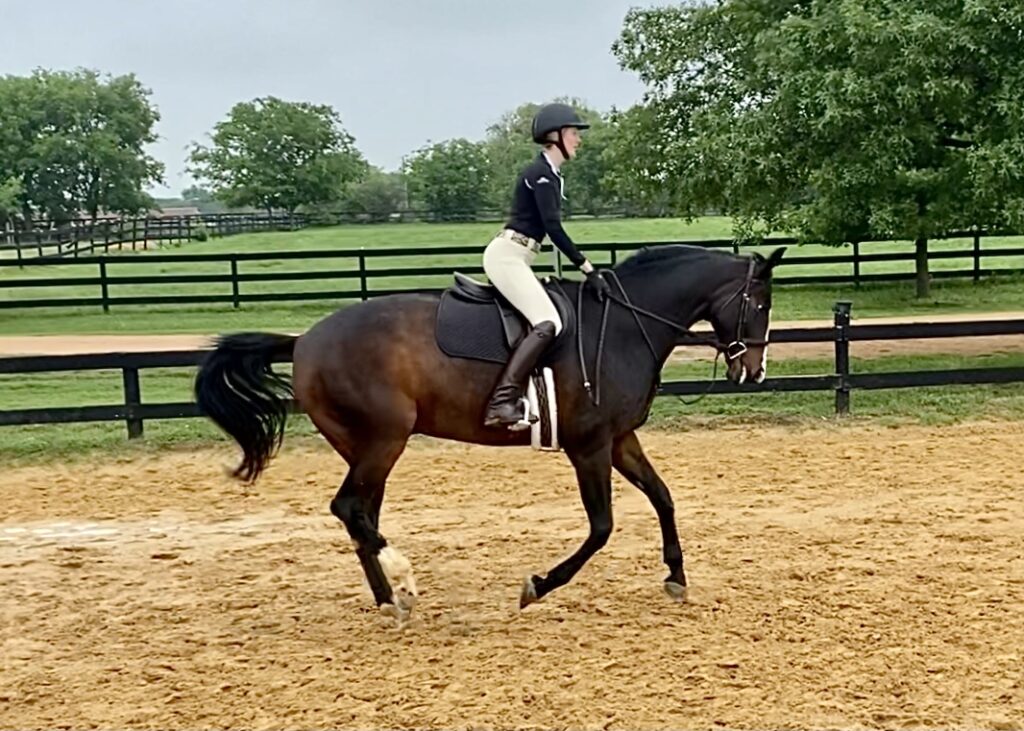 This is all to say, I’ve accepted it. I never quite know what he is going to be like from day to day, and that’s ok. He’s been fairly consistent when I put him back in his old atmosphere (aka when I trailer him to Bay Yard for lessons or hacks in their arena), so I figure if he was back there full time then he’d probably my be back to normal behavior-wise pretty quickly.
So what have we been doing? Well, we try to lesson 2-3 times a month at Bay Yard. That’s been going well. We WTC, utilize ground poles, and recently started over small cavelettis. He started out veryyyy energetic at lessons, but recently seems to be returning to his normal self. The only “issue” we occasionally run into currently is a tiny tantrum sometimes at the mid/end of the lesson.
In group lessons at my barn we all warm-up together on the flat and then take turns over the course/exercise. Rio will get to what he feels is the end of the lesson and then when it’s his turn again he will sometimes act a bit balky- plant his from feet, threaten to rear if forced to go forward, not want to turn in the direction I want. I’m getting better at riding through it though (it’s not actually dangerous behavior, just a little intimidating to a wus ammy like me) and once I get him moving (in any direction) then I can redirect to where I initially wanted to go and he goes back to his normal good behavior.
This happened in our lesson last Saturday about midway into the lesson, but he recovered pretty quickly and then had several more very good “courses”. Overall, I’d call it a success because we had a great lesson. He was mostly falling asleep between rounds, which is very much the norm for him. He was excited and happy to “jump” cavelettis, and the trot poles we did in our warmup were the best he’s done since returning to work.
Outside of lessons I trail ride about 1-2 times a week. Up until this week, those trail rides had predominately been walk-only and accompanied by my 34 yr old prior event horse, with my mom riding, and sometimes his other pasture mate, a rescued older Tennessee Walking horse mare named Nala and her mom. I felt that I couldn’t trail ride alone for a long time, because Rio can be a bit of a wus on the trail, and he will get balky and rear if pressured to go somewhere he doesn’t want to go (similar to what he does in the ring when he feels like he should be done).
When I wrote this post for the first time, I was full of excuses as to why I just couldn’t go alone, and after reading my excuses in black and white, I resolved to buck up and make it happen. I have now gone on 2 solo trail rides (Sunday and yesterday) and guess what? No one died. In fact, I had a really good time, and I think Rio did too (for the most part). When riding solo we were able to pick up the pace a bit, even cantering on parts of the trail, which is something I have never done with him. I have renewed confidence in myself and in our partnership after facing this issue head on, and it feels really good!! Do I still have to get off and lead him over the spooky bridge? Yes, yes I do, but it’s a work in progress and I’m good with that.
Previous Post Next Post

Not Letting the Heat Keep Us Down

The Journey for the Quality Canter