WHOHOOO! Beware, this post is going to be media heavy. 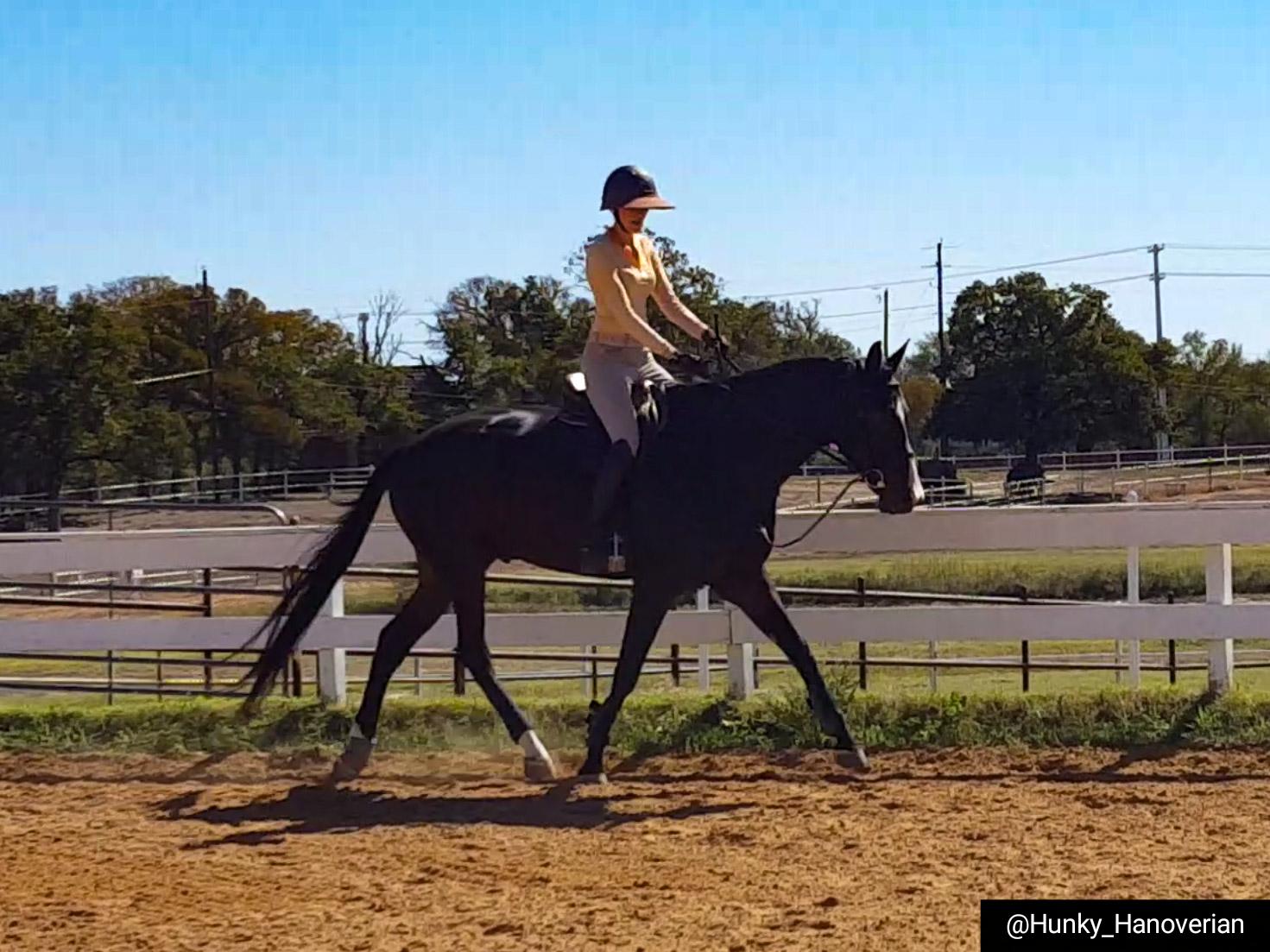 Rio and I had our first real, actual jump jump lesson since his surgery yesterday. We did a baby 5 stride line, and a single oxer at the very end. HE WAS SO GOOD!

But first let me back up. We started with some run of the mill trot work. MM had me shorten my reins a bit more then I’m used to, and hold my hands further forward, and higher up. I felt like I was riding saddleseat- no joke. This position isn’t permanent- it’s only for a little bit while Rio learns that he really isn’t allowed to drop his head, evade the bit, and get behind the vertical. Changing my hand position made a world of difference though, and totally helped change our trot. I was amazed. After working the vid, I realized I don’t even look that dumb, so it definitely felt weirder then it looked. 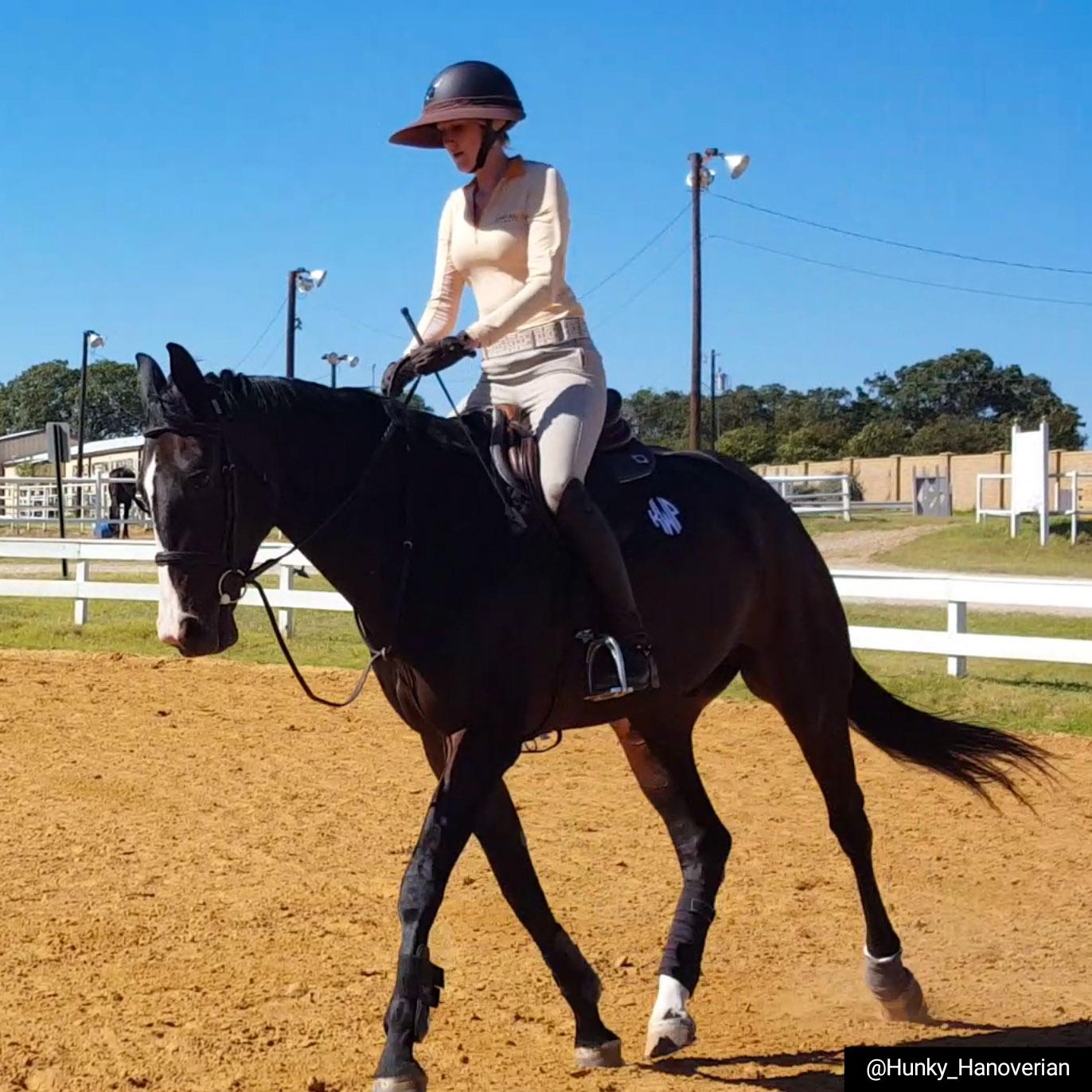 We are predominately working on Rio’s canter right now though. We are starting to do baby jumps to slowly build him back up, and keep things interesting, but the canter is what is going to make the course (as well all know, but it’s so easy to get fixated on the jumps). We have 6 weeks until a show in Waco, so we aren’t cutting it close or anything LOL. MM did a training ride on Rio Wednesday, and he was SO good on Thursday. Like, his canter is changing completely. For the first time ever, he is actually feeling uphill, straight through his shoulders, and consistently keeping his poll higher then his withers- or at least level. Like, I looked at MM and said, “I had no idea he could canter like this!” 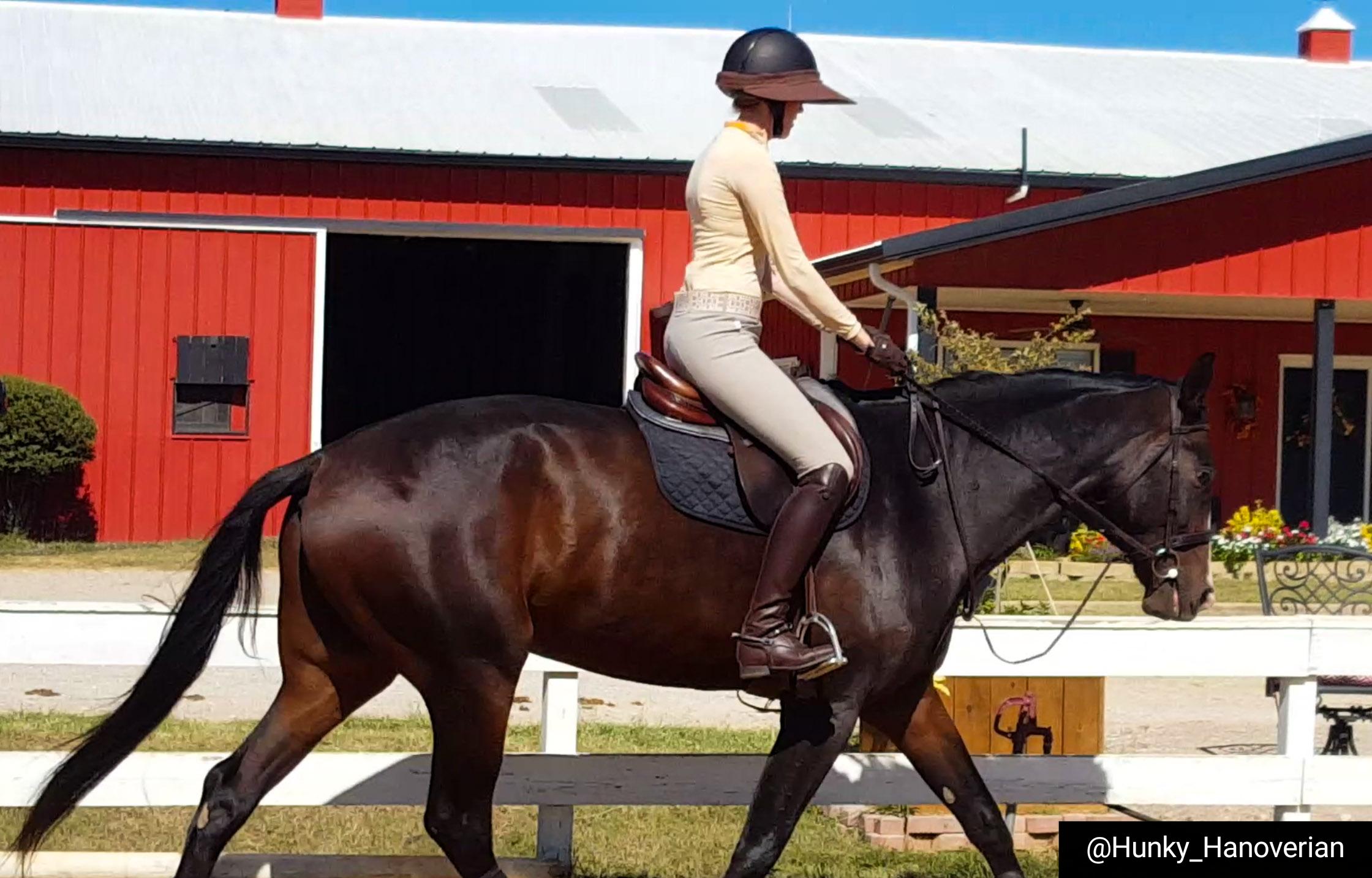 He did get a bit rushed through the line- I am still figuring out how to ride this new Rio, and he was really excited to be jumping again. But I am just so incredibly pleased that he went right back to jumping without missing a beat, ILOVEHIMSOMUCH. He seriously has the best brain ever and is going to be so easy once he gets the hang of this new way of going. 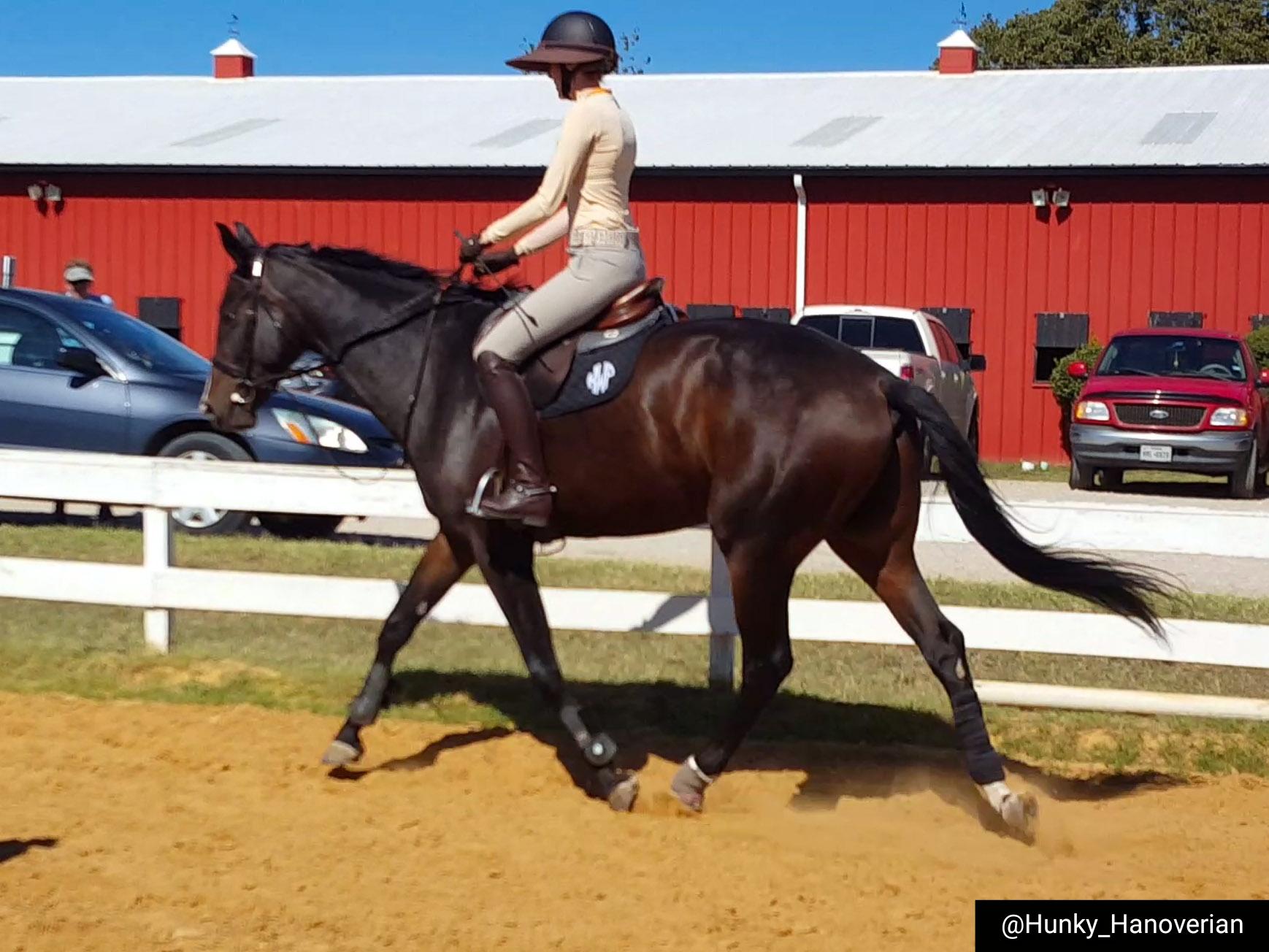 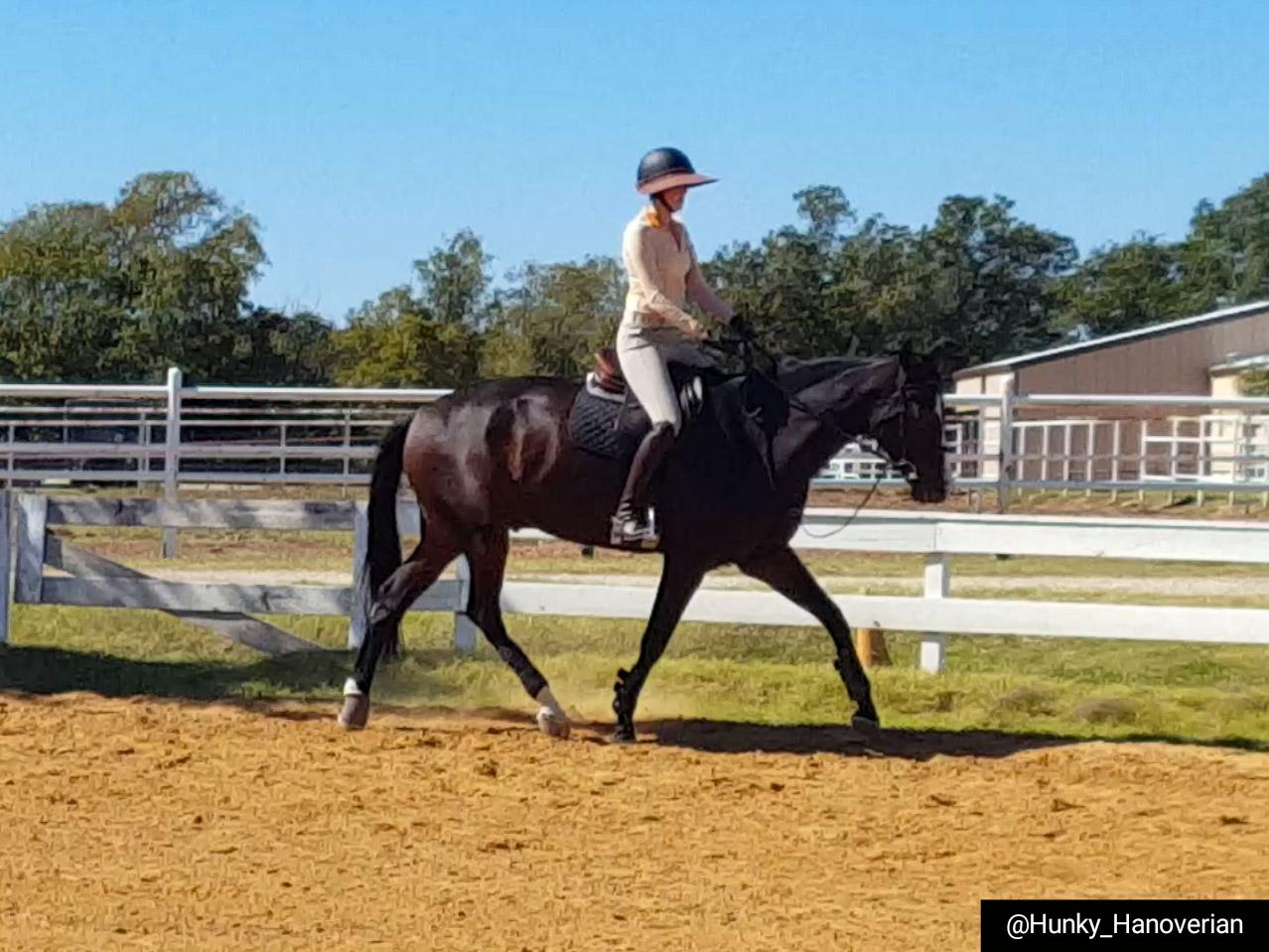 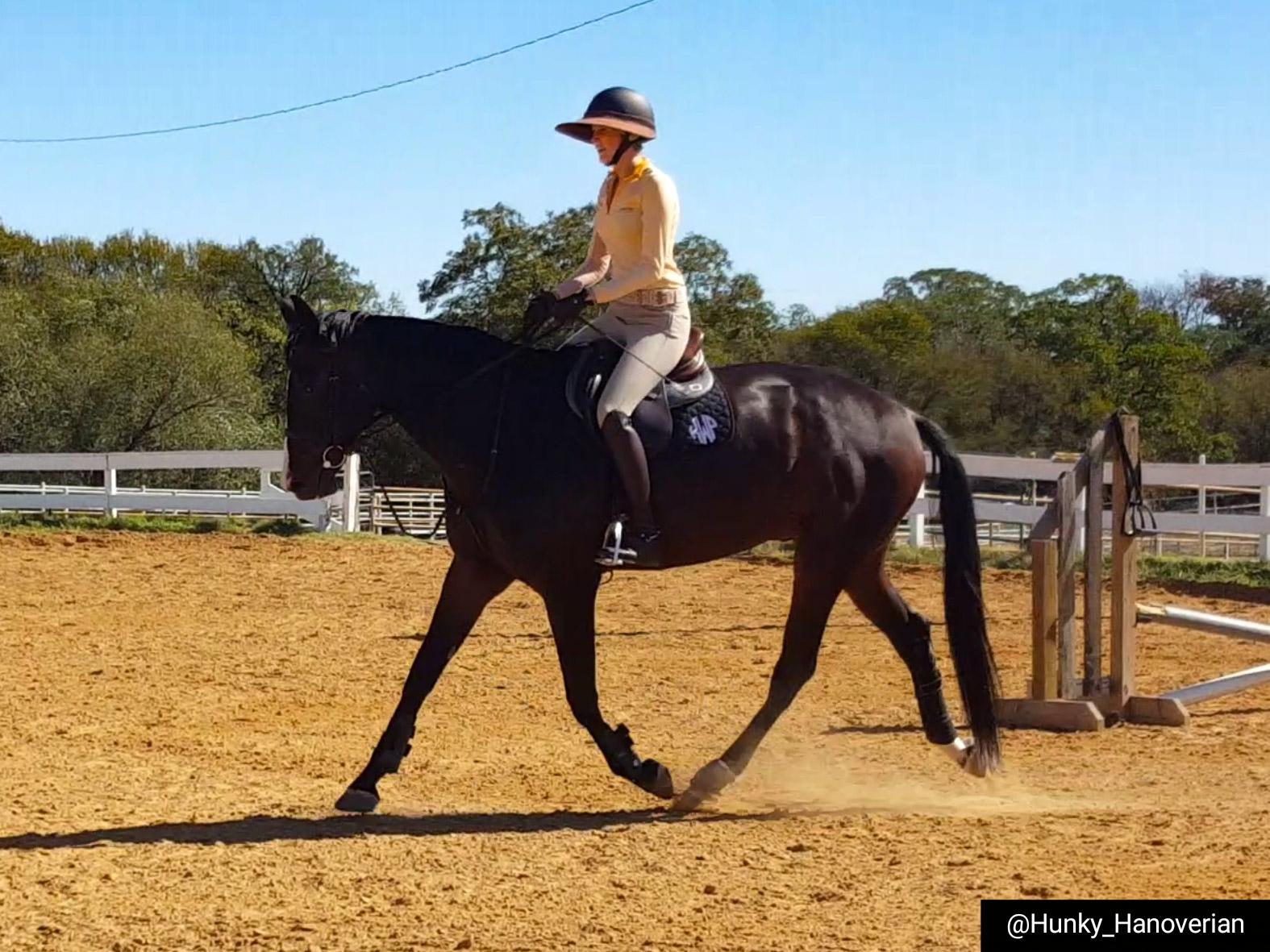 So far he continues to improve with every ride. I know that won’t always happen, but it definitely feels nice to be having so many good rides after everything he has been through. He just feels so happy and healthy, I am constantly elated.

Ok onto the video! Starts with canter work. You may look at it and think, “That doesn’t look that good, his head is up and he’s doesn’t look like he any contact.” This is actually HUGE for him. I am THRILLED to see him canter with his head up, and staying soft and balanced without a ton of contact. This is all new to both of us and I couldn’t be more proud. Jumping is after the canter work, with the oxer at the end!

**As usual, huge thanks to MM for training us and for videoing. You are a great multi-tasker!**