If you haven’t yet, you should probably start with Part 1. The 18-35 Adults Ammys were the last class on Thursday in my hunter ring, and the first class in the ring on Friday morning. It was chilly and misty/light rain as I headed to the ring at 7:30 AM. Thankfully Rio didn’t seem to mind, and he warmed up really well. I was excited to get back into the ring after our solid rounds from the day before.

It rained a bit more as we were waiting to go in. I cried a tiny bit knowing that my precious Voltaire was getting wet, and vowed to deep condition it later (then I forgot to, whoops). Rio was making some pretty hilarious faces during this little rain spurt while I was learning my course, as evidenced below: 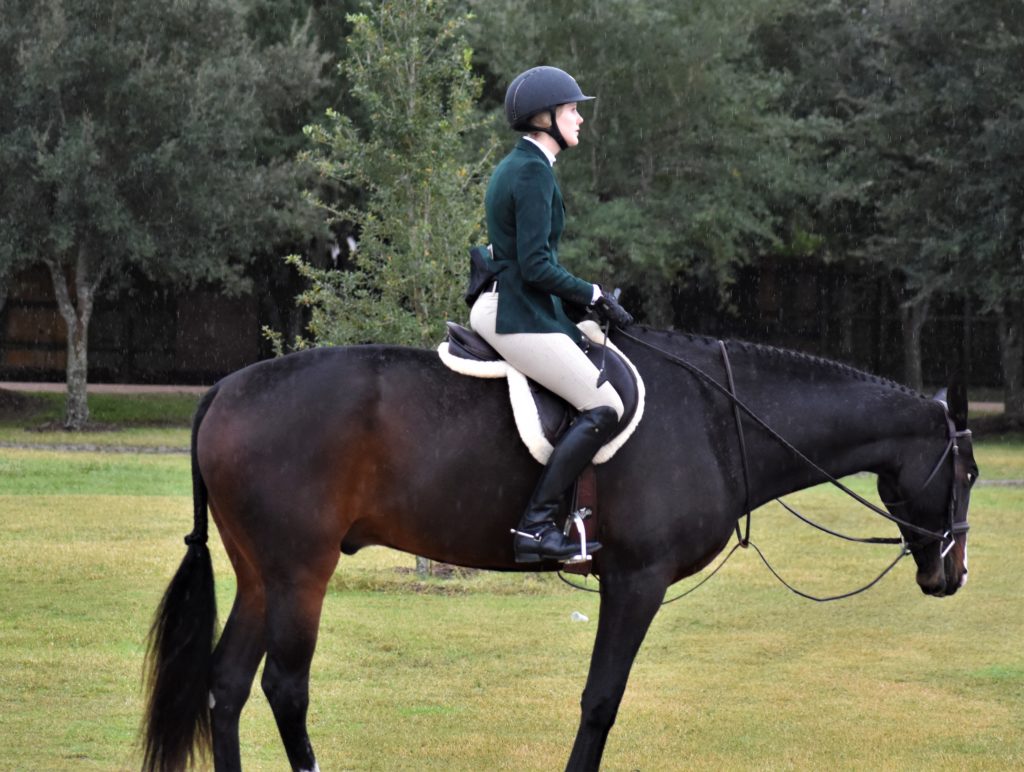 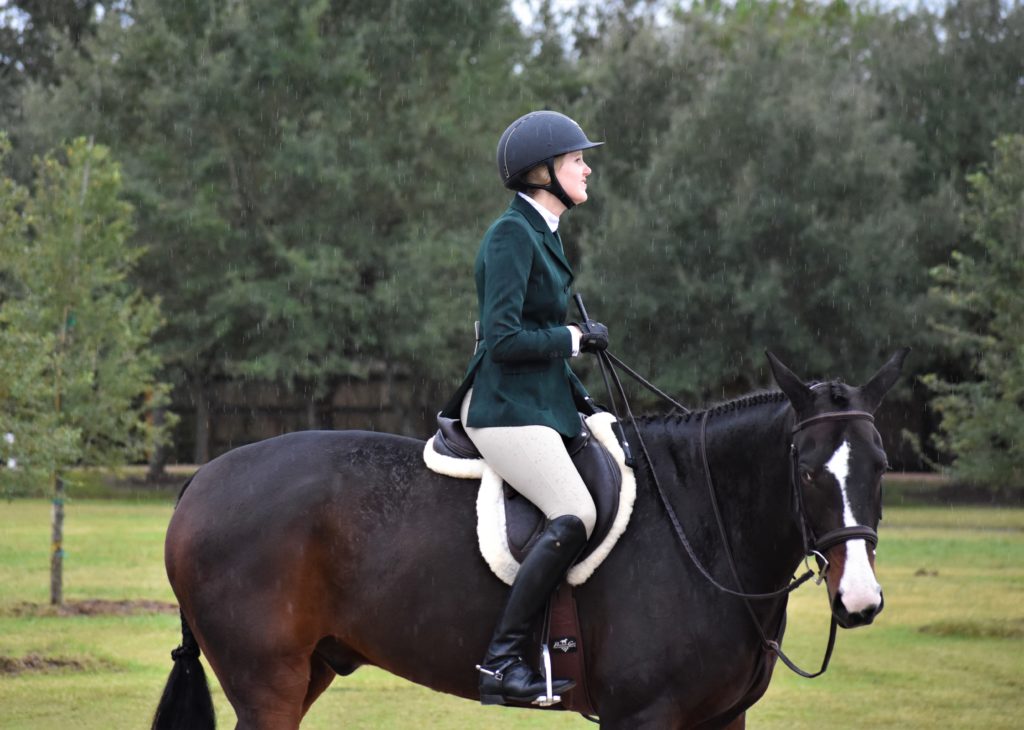 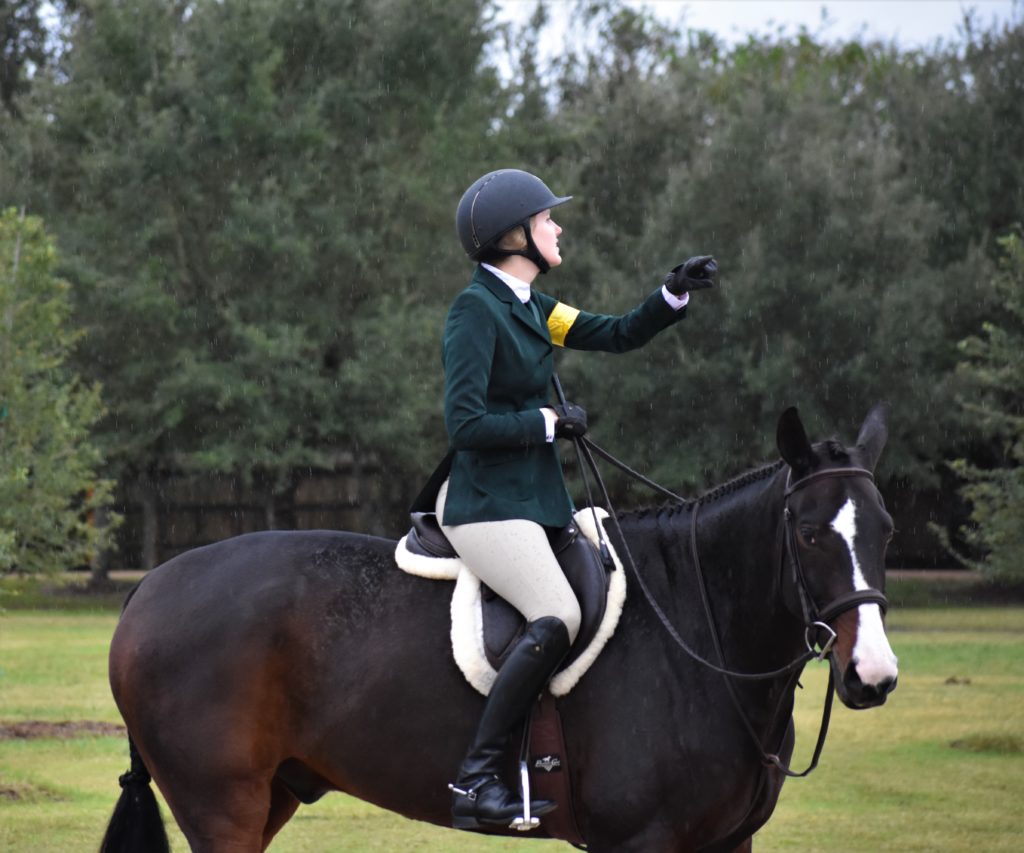 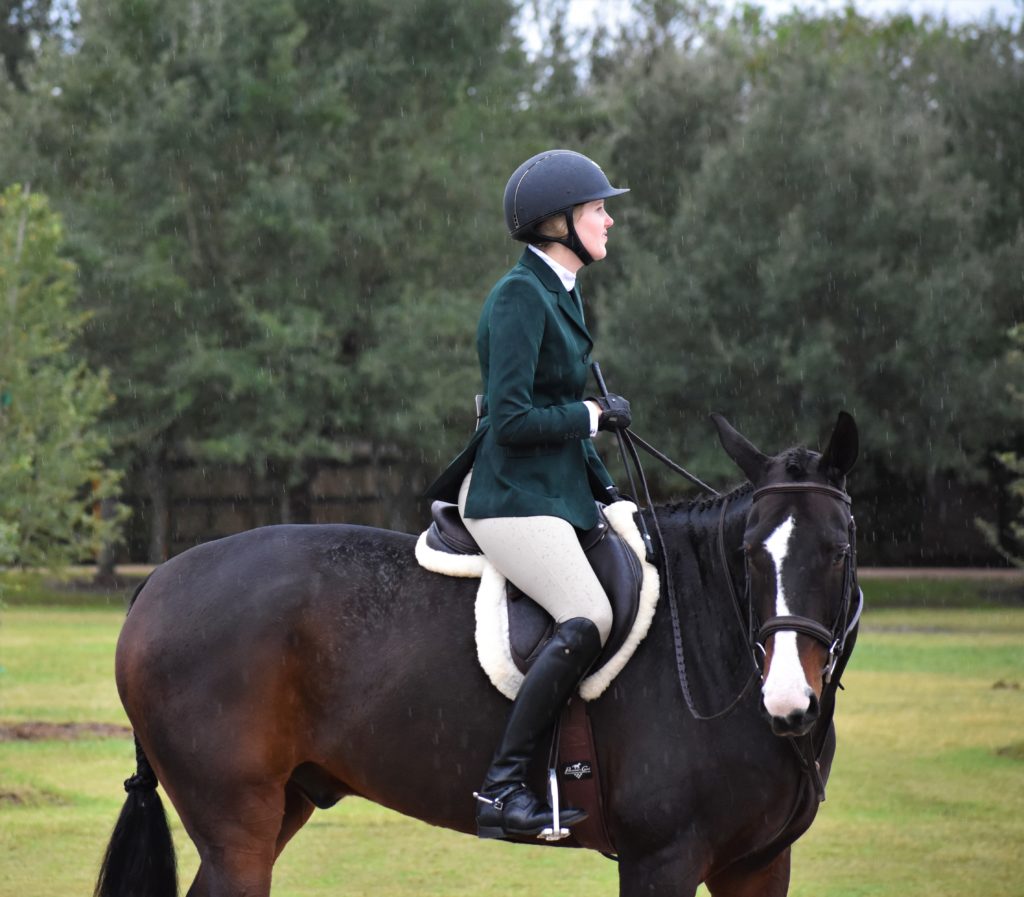 As you can tell- he was THRILLED. So thrilled.

Thankfully he didn’t hold it against me in the ring. Since we were doing the Adult Eq we decided to skip the warm-up round. Rio is pretty much only good for 3 O/F rounds in a day, and I know that that is all I am mentally up for as well. Our first round was the Eq round, which thankfully wasn’t too terribly technical. Other then a really deep spot which resulted in a tranter/maybe trot step (?) going into one of the outside lines, it was pretty dang good! That was the same side of the ring where the judge was sitting, so maybe it didn’t look too bad from her POV, because we ended up 2nd!

My next round was my 1st Adult Ammy round and it also went really well too. I fixed the deep spot from the prior round, did a better job of re-balancing his canter after the jumps, and our lead changes were smoother. The main mistake this round was getting in a bit deep to the last fence, a long approach to an oxer. Not ugly deep, just a hair tight. I was super excited when I found out we pulled a 4th in that round, as I think there were 9 riders total in my division. Gives me serious hope that when it all comes together we will be competitive for the primary colored ribbons.

At this point I was super hyped for our last round. Determined to fix the small stuff and bring it all together, I confidently entered the ring, and promptly entered La La Land. With basically no plan to the first fence (a single vertical on a short diagonal), I wasn’t counting strides. About 4 strides out I realized the distance wasn’t going to present itself on a silver platter and I BURIED him at it. Not long after that I realized the announcer was asking me to hold on course. I looked up at my trainer at the in gate who was holding her hand up and telling me to stop. I mean… it was pretty bad, but to stop me?!? HAH! It was totally because there was a rail down that they hadn’t noticed before I started, which meant I got to REDO jump 1. YUP. Talk about lucky!! 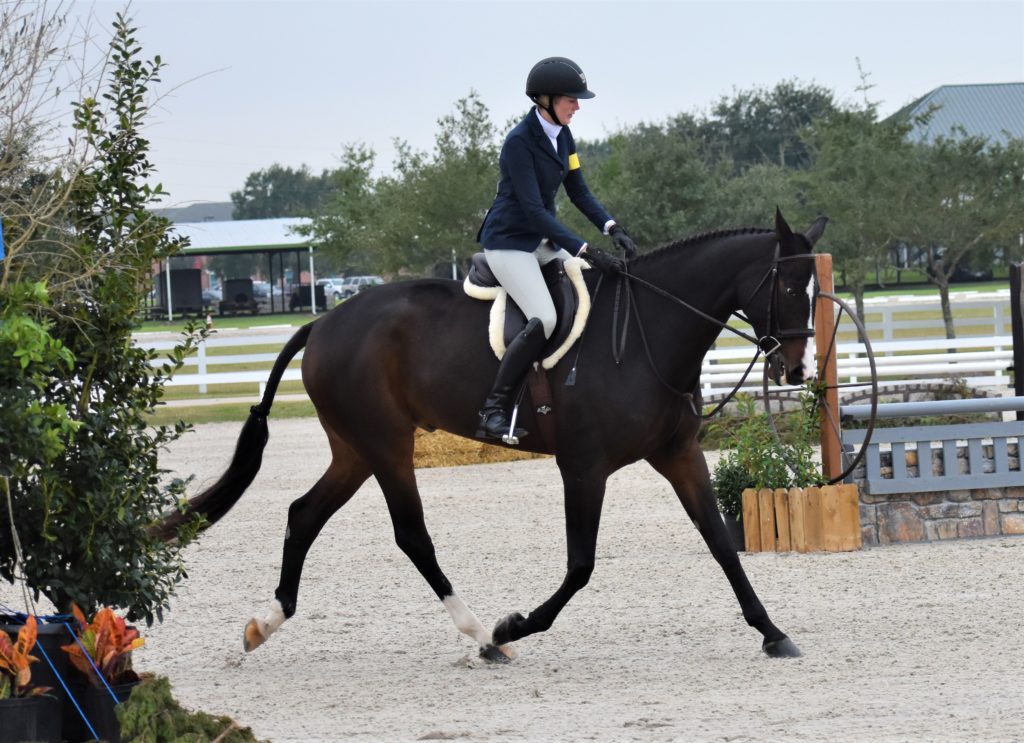 Determined not to screw the pooch this time, I started over on course and found a much better spot to jump 1, hallelujah! My next outside line (the one I did so poorly on in my Eq round) rode beautifully. The long approach to the oxer was spot on (YAY). At this point my mind started to drift.

“Wow this is going really well. Like wow, maybe this is the course where we nail it. We could win. We are half way done and this is going so well!”

Ya… then I over shot the turn to the the next outside line (which had been riding fine all day), and had zero plan. If I had been focusing I probably could have easily softened and clucked for a bit of a longer but still acceptable spot, but instead I sat there and ran Rio into the base of the jump. It was a bad chip, but somehow he twisted and got over, and still managed to get out of the line nicely. Thankfully, we had 7 strides to recover. In Rio’s version of protest, this was followed by a bit of a rough lead change, and then an OK but stiff 2 stride combo to finish off.

I was legit laughing at myself. That is what happens the second you get even a little cocky on course, and I totally deserved it.

I have a sense of humor though, and I didn’t let it keep me down. I am so stinking proud of how it went. Like beyond thrilled. Totally new venue that was a definitely step up as far as competition and overall atmosphere, and Rio held his own. I couldn’t be more thrilled to end our first year on the A circuit with our performance at this show. 5 “A” shows under our belt and it feels like 20. I can walk down the busiest aisle ways with tractors piled high with shavings, dogs barking and darting everywhere, and every other sort of distraction, on a totally loose rein with no fears.

I am out there doing what I dreamed of, on a horse that I hoped would have some marginal talent as a hunter. He’s come this far in a little over 2 years. I seriously cannot believe that he lost many months to a spider bite, and months more to splint surgery, and now we are finally “there”. There, where I hoped we could someday be when I first saw him as a gangley just turned 5 yr old. Best part? Rio’s the perfect partner. He’s FUN and SAFE. Exactly what I was hoping he would turn into. I know this is getting really sappy, but it had to be said!

The rest of the show day was wonderful as well. I got to cheer on my fellow barn mates and my bestie who was also showing with her barn. We used to dream of showing together, and now we are finally doing it! Good people definitely make everything more fun.

HUGE thank you to everyone at team Bay Yard for making this all happen. I could not ask for a better barn family. Seriously, they are a TOP NOTCH program and make showing incredibly fun and stress free. It’s so fun that I absolutely cannot wait to do it again- every time!