I can’t lie, I had a lot of anxiety going into this show. Our last show was Waco in December, and it was coming off 2 other shows, making 3 shows in 3 months. I get a LOT less anxiety when I am showing consistently. Our shows last fall went really well,  and then I had a slight feeling of back-sliding when I struggled with lead changes in Waco. No problem though, I knew I would take a bit of a break after that show to stay home and practice and relax. What I didn’t realize is that due to my barn’s show schedule, I wouldn’t get back out until May. My barn is amazing and shows plenty, it’s just that some of those shows are out of state and I can’t handle the time away from work and the additional expense of going that far.

That left us with plenty of time to stay home and do our homework- too much time honestly.  Horse showing is such a different game from riding at home IME. You can practice all you want, but that doesn’t necessarily directly correlate with show results (as we all know!), so staying home TOO long was actually giving me serious anxiety because I was putting so much pressure on myself to show improvement when I finally did get out to another show. Lots of time to practice should equal no excuses right? If only! The show environment is just so different. Anyway, my point after all this rambling is that I was really nervous to show!

Trainer Julie rode Rio in the 3′ greens on Wednesday and Thursday morning. I was at work Wednesday, but thankfully got to see the videos on-line. Other then being a little looky and excited, Rio was a rockstar and had trips scoring in the low 70’s, which I felt like was super fair. No major mishaps, rails, trot steps or missed lead changes like has sometimes happened in the past. At this show last year Rio had 2 refusals at the same jump, so we have definitely come really far since then. Their were 18 in the  3′ greens, and I heard on Thursday that the cut off to jog for a ribbon was 76. Although Rio didn’t pull any ribbons in the greens, I was still immensely proud of  him.

Thursday afternoon was my first day of showing. I did 3 O/F rounds, the warm-up and 2 Adult Ammy hunter rounds. Our warm-up was really solid. A chip to the first fence, the rest of the course rode pretty well and we executed 2 changes as needed which I was very exited about. I went back in for my first hunter round and everything just sort of came together. We found all 8 fences at decent enough spots, did the lines easily, and got all our lead changes finishing on a score of 80!!! I don’t think I have ever gotten an 80 in my life, and I was (and still am!) so happy!

I was pretty hot and tired at this point, but headed back in for my 2nd hunter round. The first fence was the same one I had previously chipped in my warm-up round, and it rode perfectly out of stride. Then, I struggled with getting the change behind and had to trot a step to get it. For those not familiar with hunter scoring that basically kills your score. No worries though, I kept riding, rode the single oxer beautifully, and then got a nice change. The next outside line rode really well and we landed the lead. When I went to re-balance on the short side, we trotted. Shit. As if my score wasn’t already doomed lol. I recovered and jumped in well to the next line, but never re-balanced and shortened him, which led to a lovely chip out over the oxer. At this point I am straight up laughing at myself on course. Next, I get in really tight into the last diagonal line and bring the rail down- which is also a great way to massacre your score. I basically made every bad mistake you can make in a round. But honestly, it wasn’t that bad. They were all silly mistakes. I was bummed about missing the first lead change since that is an area I am really insecure about, but everything else was completely rider error, and sometimes that is just how it goes! 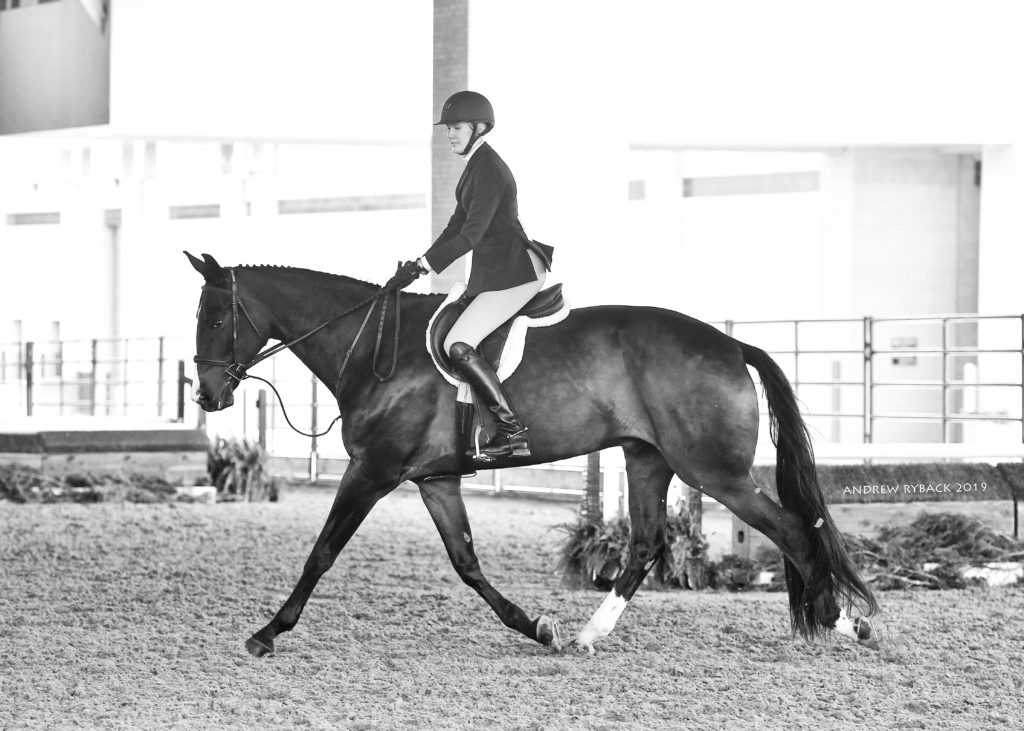 My division was the last to go on Friday, around 3 pm. I was much less nervous overall, but still felt like throwing up as I walked in for my first hunter round. We decided to skip the warm-up since we were also signed up for the classic. We started on a single across the diagonal and landed the wrong lead. The left to right change is our hardest, but I remembered to stay somewhat straight and we got the change (YAY!). The next outside 6 stride line came up nicely, and we landed the correct lead. I was feeling really solid so far. Unfortunately, I screwed the pooch as I rode too deep into the in of diagonal line and brought the rail down. The next line rode beautiful, as did the last long approach to a single oxer. We then landed the wrong lead and executed another left to right change to finish off. Super bummed about the rail, but I was so so pleased with the rest of the course, and that we nicely pulled off all the changes.

Our next course was the first score of the classic, and I chipped the crap out of the long approach to the oxer, and chipped into one of the lines. My score of 70 felt very fair. Not horrible, but what we deserved for out 2 missed distances. I still felt good going into to my classic round, because I had heard several scores so far and most seemed to be hovering around 70-75 range, so I felt like I still had a good chance at a ribbon if I put in a semi-consistent classic round.

It was going so well until the last line. it was a 6 stride that I had already done 2 times that day with no issues. I don’t know where the heck my brain was, but I jumped big into it, which would have totally been passable if I had just sat up and woahed a little. INSTEAD, I semi-forgot it was a 6, got there in 5 and realized/panicked at the last moment remembering it was actually a 6. Rio, the saint that he is, got us over it despite me doing absolutely zero to help him. Then we executed a beautiful rollback to the last oxer. Score of 54 kept us out of the ribbons.

Am I bummed that I couldn’t keep my brain functioning enough to make an easy correction and not totally throw the classic round? Sort of. But honestly, I am mostly super freaking psyched that we had 8 beautiful jumps that round. I KNOW that Rio has the adjust-ability to jump in big to a line but still make the strides, I simply forgot to ask him. I am just thrilled that despite various small mistakes, our rounds were consistent and pleasant. We got all of our lead changes on Friday, which is something I wasn’t really expecting. I am SO HAPPY with the way everything went. I felt like I had all the tools I needed, I simply need to remember to use them all. At this show last year I could NOT fit the strides in to this one diagonal line, no matter how hard I asked him to. That isn’t an issue anymore, and that one outside line was 100% rider error.

Overall, I spent the entire show on cloud 9, and I still feeling that way. My trainers were very supportive and complementary of our overall consistency and solid progress. The icing on top, we even got a few good ribbons pulling a 2nd in the warm-up out of 7, and a 2nd in our first hunter round Thursday, a 5th in our second hunter round Friday and a 4th in the U/S out of 7. I couldn’t be happier with Rio. He was absolutely amazing, and I had SUCH a fun time. My barnmates are all so nice, fun, and supportive. I couldn’t ask for a better show, and I am already super excited to do it again!!!

Don’t want to watch all the individual rounds? This video is my attempt an edit! It’s still 2 minutes, and I may have gotten out of hand with the slow mos… sue me ok?!?