Ever feel like you can’t catch a break? Like, you’re a pretty good person (you donate to charity when you can, you foster unwanted dogs, you don’t murder people even when they reallyyyyyy annoy you, that sort of thing). But then bad luck just rains down on you, FOR NO REASON. I haven’t done anything that made karma come for me, I swear!

Trainer called me on Monday afternoon- Rio the Houdini had escaped from his stall and taken a swan dive on the an area of asphalt on the property near trainer’s house. Vet was there already stitching up his elbow and making sure the rest of him was mostly in one piece, 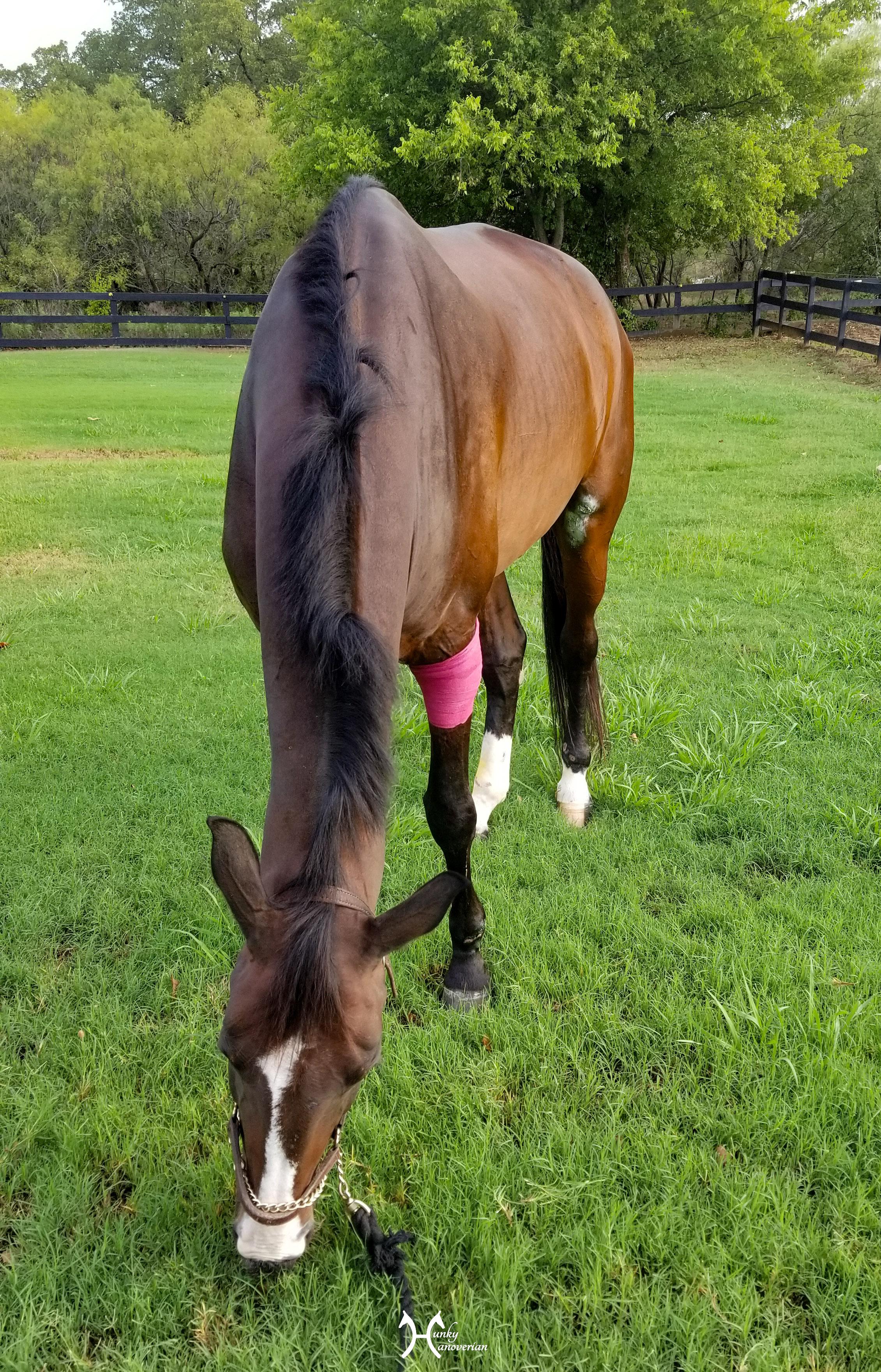 The wounds appear predominately superficial, but he took some deep-ish gouges out of his left stifle area. We may x-ray it on Friday when the vet comes out to remove the drain (he left one in his left elbow where he had to stitch it up). He said that he felt like the stifle joint capsule was tight and not disturbed, but it’s really swollen and torn up so it was hard to tell. He also tore up his left medial distal hind, the area from 2 previous surgeries that I have tried so hard to keep protected with the custom made for Rio Equifit boots and various pastern wraps. The same area that I had worked SO HARD to get it to heal previously, and even resorting to daily laser therapy treatments.

So…. possible stifle damage, which is scary enough, and then who knows how the left medial hind, aka the area from HELL, will heal. Let’s just say I haven’t been sleeping well.

A few other small scrapes are not pictured. Also not pictured are the left elbow sutures, because it’s a difficult area to wrap and was wrapped up really well. The only leg that escaped abrasions is the right front. All legs are swollen to some degree.

I’ve been bemoaning my poor fortune and sulking since I heard the news on Monday, but I work at a university hospital and a few of my recent patients kind of put stuff back in perspective for me. I am moving the “woe is me” to the back burner and trying not to dwell on it.

I am also trying to see the silver linings. The injuries could have been worse. Rio is at a great facility with excellent care, so even though I love doing the tending, wrapping, and cold hosing myself, I don’t have to worry about getting out there twice a day to make sure it gets done. We don’t have any shows on the near horizon that we will now be missing. Compared to what we have been through together when it comes to freak medical issues, this is small beans (hopefully… that stifle…). It’s been raining so much lately that’s it’s too wet to ride anyway. I just renewed his insurance policy, so minus the deductible I won’t have an insane vet bill to contend with.

So… I seems crazy that I am writing another “Rio is injured” post but here it is. Fingers crossed for quick and easy healing, and no lasting damage!