Hey everyone! It’s been awhile since I’ve posted an update. I’ve been lying low during all this COVID stuff and keeping mostly to myself. I do work in healthcare, so work has been weird, but it has been nice to maintain some sense of normalcy as well. The other nice part has been spending a ton of time with Rio. Since we got the ok to start walking under saddle we have been going on trail rides about twice a week. And when I say trail rides, I mean walking on perfectly manicured and mostly flat trails, so they are perfect for Rio’s rehab plan. 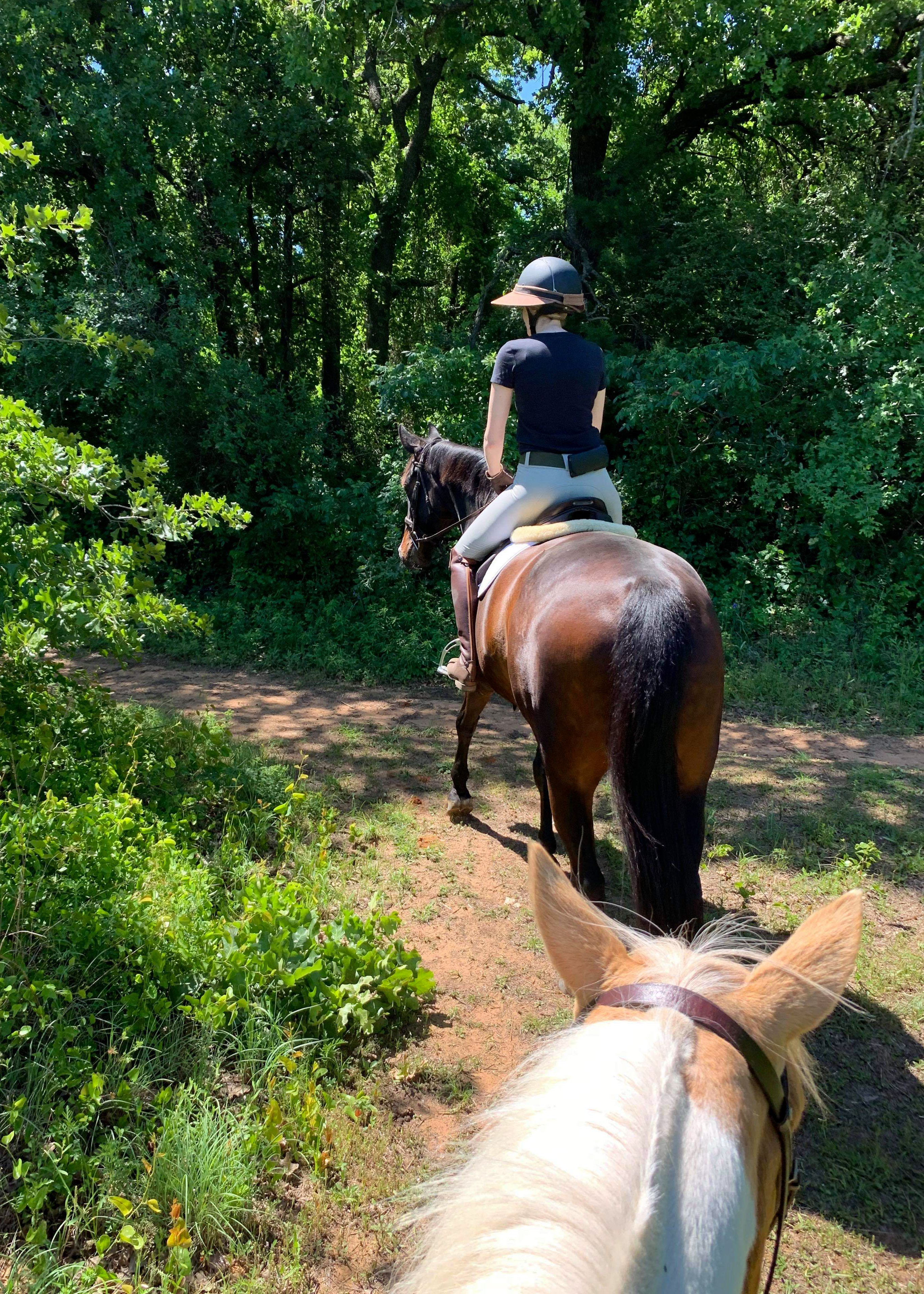 My friend Liana has been coming out some to trail ride with us. Although I am taking social distancing seriously, it’s nice to get to catch-up with a friend outdoors in beautiful weather. I invited her out this past Sunday. We planned on her riding Rio today and me riding my old retired eventer. Our plans sort of unraveled though when I realized I had forgotten Rio’s girth (and there are none at my mom’s place that would come close to fitting him) and then when we went to get the horses from the pasture we realized poor Pal had injured his eye. I’ll save that pic for the end of the post since it’s graphic and some people are squeamish. Essentially, about half his eyelid was ripped and hanging down in front of his eyeball.

I mean, Rio is really fat right now, but he’s also 18 hands. He’s such a show horse that he was a total wiggle worm that acted like he didn’t know how to walk straight in the open pasture, but once she started walking him around the smaller paddock he seemed to realize it was like a small arena he was perfect. #goofball

The vet showed up super fast which was amazing. He got right to work on sewing Pal’s eyelid back on. Rio had to get put into a stall due to being too freaking friendly.

Rio is LOVING his Shoofly Leggins. Yes, he is missing one on his LH, but that’s on purpose. He has an old injury on the medial coronet band that was getting irritated from the boot. I need to try to find something to line the bottom with to help pad it. Thankfully, it’s a hind leg so he has his tail to help with those pesky flies, plus it’s only one leg to fly spray haha. I have been needing way less fly spray since getting the Shooflys.

Are you tired of adorable Rio pics yet? Me either, but unfortunately that’s all I have for today. He is doing so good though, and I’m so thankful that I can see him during all this and spend as much time with him as I want. I would have gone totally stir crazy without him and work throughout all this. Or I would be signing up for AA at this point. But back to Pal, he was perfect for the vet and his eyelid is all sewed back on now. Poor guy- 33 yrs old, this is the last thing he needed. Good news is the vet feels strongly that it will heal well, and he wasn’t concerned about infection. He gave him a shot of Exceed to be safe (a 4 day antibiotic) and hopefully that is all he will need. Other then that, he is getting bute for a few days to help with any discomfort.

Ok, that’s all I have for today. Don’t keep scrolling if you are squeamish and don’t like graphic pics! Sorry I am the worst and forgot to take post suture images. 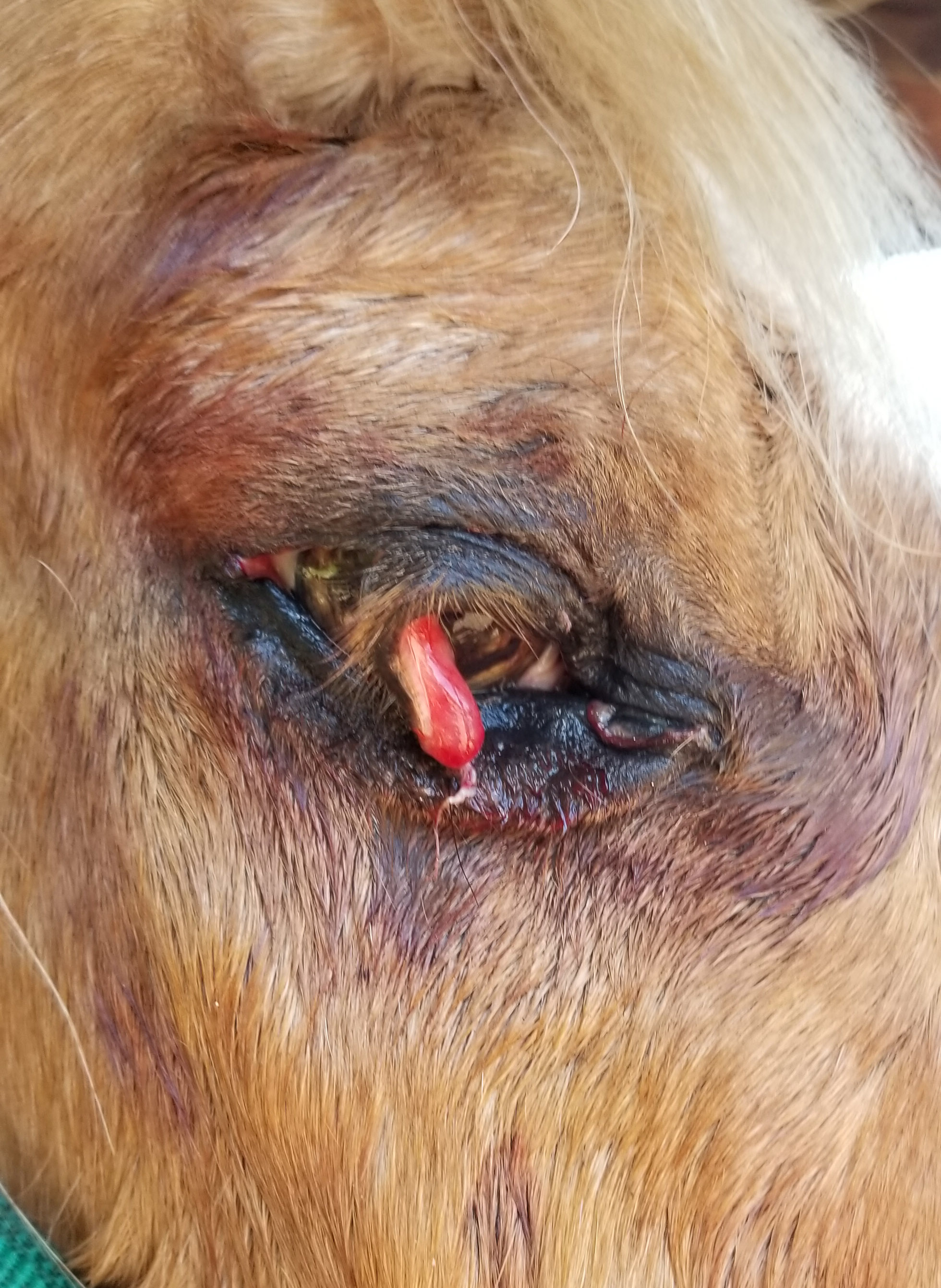 Hey guys! Since I don’t have any new blog content at the moment, I thought it might be fun to […]

Post topics have been slim pickings for me lately. I’m still lessoning when I can, and I’m still visiting Rio […]

I have had the opportunity to make some wonderful friends over the years via social media. It can be hard […]

Rio has has a bit of a history of getting out of his stall. He has been able to get […]

Writing blog posts is getting increasingly hard y’all. I just don’t know what to say about Rio while he rehabs. […]

UPDATE!!!!! One of my readers tipped me off that Santa Cruz Biotechnology has a history of animal cruelty. I looked […]

Taking my big dog for a walk

I spent my MLK day at my parents’ place with Rio. It was gorgeous outside so we decided to go […]

I have ALWAYS wanted to go fox hunting. Always. I distinctly remember looking up local hunts when I was in […]