Guys. I don’t even know where to start. When I bought Rio he was a gangly 5 yr old. I couldn’t get him to pick up his right lead when I tried him. He didn’t have a canter, it was basically a hand gallop or a trot. A 30 m circle was a crazy hard challenge for us. To my knowledge, he had previously done some cavelettis, but no formal jump training. His seller was very upfront with me that she didn’t know if he’d be much of a jumper. He was pretty uncoordinated at that time, so I can definitely see why she had that impression! I purchased him knowing that he may not have an aptitude for jumping, and that that was ok. If that wasn’t his calling, we might do some dressage.

17 months later, 8 of those spent on stall rest/no riding at all, and Rio and I made it to our first A show. We showed in the 3′ Greens, the Adult Amateurs, and the Adult Equitation (also at 3′). I seriously kind of can’t believe we made it to this point. We ACTUALLY made it an A show, and guess what? Rio fit right in. You would never have known that it was his first real show. Did we make mistakes? Lots. But did we stick out like a sore thumb, or look out of place? Not at all. Turns out, Rio is the perfect show pony, and soaked in the whole atmosphere.

I am BURSTING with pride. Is this real life?!? After so many setbacks, we finally “made it”!

I was SO NERVOUS that we might be a bit out of our league at this show. I wondered if we were doing too much too soon. I’m not some pro rider with a long track record of bringing along green hunters- I barely have a hunter show record myself. I haven’t been in the 3 ft ring in over 2 years, and that was on a made show hunter with many years of experience, and I still made mistakes. I wondered if green leading the green was such a good idea. Our lessons leading up to the show had some great moments, and also some “OH SHIT” moments. If it hadn’t been for MM, there is NO WAY I would have thought this show would have been possible. She consistently built us up leading up to the show. Never harped on my mistakes, never made me feel like I wasn’t capable. Always reminded me what a good boy Rio is, and that he would do whatever I asked. Reminded me that what I saw as huge mistakes were really just silly moments and nothing to get hung-up on. 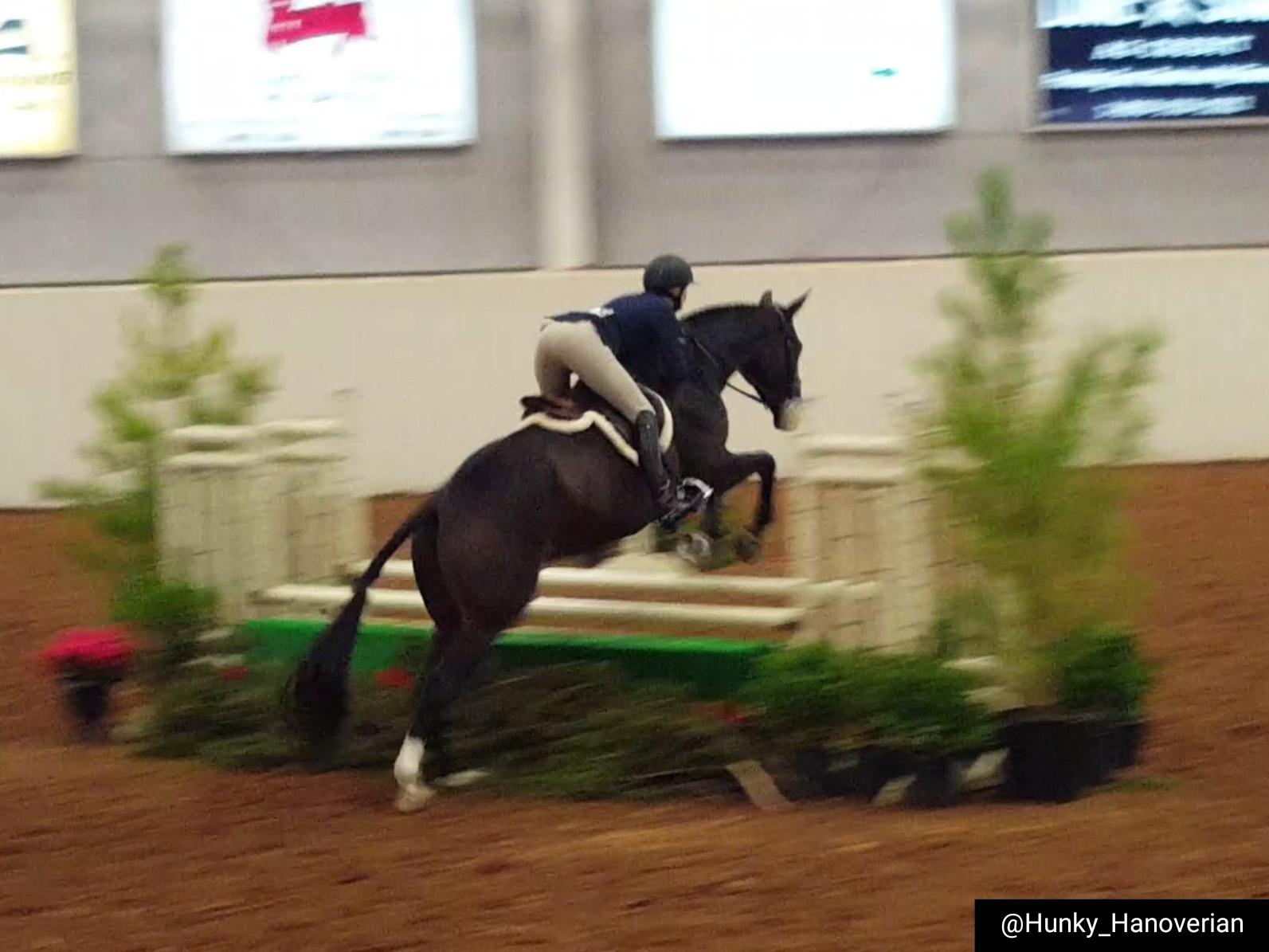 Going into the show I was nervous, but I convinced myself that I would be able to school in the show ring over the actual course the day before the show, and that that would calm my nerves and prove to myself that we could do it. Well… the show managers ended up closing the ring before I got there on Tuesday. My first time in the ring would be the actual show the next day. I tried not to freak out. Tried to keep the panic at bay. MM assured me that she had jumped Rio over everything earlier in the day and that he was a perfect angel, even better then at home. When I went in for my warm-up round on Wednesday (warm-up rounds are still judged, but points don’t count toward your actual division for Champion/Reserve), I really didn’t know what to expect. Would he refuse? Would we make the strides in the lines? Would I totally screw-up all the distances? Would we be able to get our lead changes in the smaller ring? Is this where I die? Panic panic panic. We went in.

Spoiler- we didn’t die. Was it perfect? Nope. Was  it a disaster? Not even close. We added a stride in the 6 stride line, and no one died. I just didn’t have a feel for the lines yet. Rio did everything I asked of  him. He was listening, and willing. No spooking. no craziness. Our distances (other then the first diagonal line) all went very smoothly. The long approach to the oxer that I had been dreading? Nailed it. Why was I panicking again? Watch the video closely and you’ll see a HUGE smile on my face after the last fence.

Video (MM filmed from the in-gate, sorry there is a ton of crap in the way, but better then nothing right?)

Pretty great right?!? Not bad for our first time around, and Rio’s first time in an indoor ring. I always knew Rio was the best horse ever, but he confirmed it for me at the show. He took everything in stride, and was completely relaxed the whole week. HOW DID I  GET SO LUCKY?! I really want to know.

Anyway, I will go more into detail about my various rides in Part 2. All I want to do in this one is gush about what an amazing horse I have, and how far we have come, and how I am so lucky to have him. I am also very lucky to get to train with such a great trainer (MM) and have such an incredible barn family. I had a blast hanging out at the show all week, and cheering each other on while just enjoying the atmosphere in general. Horse shows are seriously my happy place.